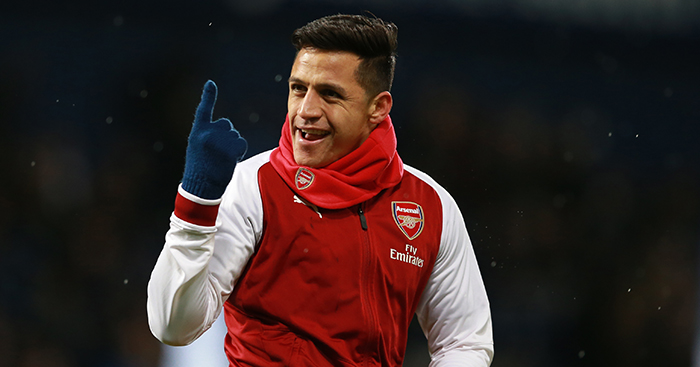 Alexis Sánchez has been likened to Carlos Tevez after completing his move from Arsenal to Manchester United, but there is another player he’s well capable of emulating at Old Trafford: Dimitar Berbatov.

Over the last few years, my friends Tom and Scott have employed what might be generously described as a Mourinho-esque approach to playing FIFA.

It’s a simple set of rules: four defenders, all of whom never cross the halfway line, a striker who can defend from the front, and five midfielders, four of whom are picked for their defensive qualities and one – just one – who is allowed to display anything approaching flair.

And, you know what, it works. They’ve lost just twice over the course of several years – maybe ol’ Jose was onto something, even if the plan let him down towards the end of his second Chelsea stint.

Given Mourinho’s reputation, both during his current stint at Manchester United and in European triumphs with Internazionale and Porto, it would be easy to question his signing of Alexis Sanchez and wonder how being asked to chip in defensively will affect both the Chilean’s effectiveness and happiness.

Some have likened Alexis to Carlos Tevez, another South American who successfully used his low centre of gravity to bamboozle Premier League defences, but critics will question whether he has the ability – or inclination – to replicate the hard-running for which Tevez became known under Sir Alex Ferguson.

This, however, assumes Alexis will either (a) alternate with Romelu Lukaku and/or Zlatan Ibrahimović as the focal point, both attacking and defending from the front, or (b) share duties with a combination of Anthony Martial, Marcus Rashford and Jesse Lingard in support of United’s literal or figurative number nine.

This excludes a further option, namely giving him free rein and increasing the defensive responsibilities of other attack-minded players.

And if Mourinho thinks he can revive the Alexis of Barcelona, and of the early part of his Arsenal spell, there’s no reason why he can’t embrace the flair of a 2004-05 Deco, a 2009-10 Wesley Sneijder or – to bring things back to a United slant – Dimitar Berbatov.

The Berbatov comparison might seem too convenient, given that United are signing a player first linked with rivals Manchester City, but it goes beyond that.

The Bulgarian received a great amount of credit for his goalscoring exploits at a number of different clubs, ending his career with an average of one goal every two games, and Alexis has a very similar hit rate across his 300+ appearances for Udinese, Barcelona and Arsenal.

More than a goalscorer

However, as with Berbatov, you can spot a chancer a mile off if they point to those numbers, and not the other things he has done, as evidence of his quality.

It’s not about the number of goals but rather the goals themselves, and the nature of those goals as the kind of strikes few others could pull off.

This is especially true of arguably Alexis’ best ever strike, a Clásico-clinching effort against Real Madrid which he could repeat but which few others could manage even once.

He begins his run to goal before Neymar even receives the ball, much less decides what to do with it, and the movement and timing would make this impressive had he merely slotted the ball low either side of Diego López.

Of course, that’s not how this story ends. Instead, having given Raphaël Varane a long enough look at his burst of pace to get him to stand off, he finds an angle that was never even really there – or at least wouldn’t have been for most other players, past or present.

It’s that rare beast of a chip that barely even elevates above crossbar height…because it doesn’t need to.

The good will outlive the bad

Football fans can often have short memories, to the point where Alexis’ contributions this season have brought focus to his tendency to give the ball away rather than what he does when he keeps hold of it.

On this front, time will probably soften the criticism – the most skilful players of their respective generations never had a 100% hit rate with their more ambitious plays, and indeed they generally failed more than they succeeded.

That goes for Berbatov, too, whose reputation as a lazy player better out of a starting XI than in it has certainly been dialled back. After all, the picture of an ex-player fades à la Back to the Future as soon as it begins to be painted both by those who saw him live and those who have made do with highlights packages.

It can work both ways, with Christian Vieri a prime example of the positives dulling, but Alexis, like Berbatov, seems primed for the opposite.

Goals like this, scored barely 12 months ago, will suffer from a cooling-off period as Arsenal fans get used to life without last season’s Player of the Year, but years from now, memories of his less than 100% effort towards the end faded, those that saw Alexis play will reminisce about moments like these.

United’s squad isn’t exactly lacking in quality, but there’s arguably a vacancy for the kind of magic produced in the past by Berbatov, Cristiano Ronaldo or even Nani.

And a Berbatov-level contribution could end up being much more valuable to this incarnation of the Red Devils than a hard-running stats machine.

The manager knows what he can expect from the current first-team squad, and while Martial might already offer audacity and high-speed eye-scratchers, Alexis is the man who can do the same at walking-pace.

He might be viewed as the guy who runs in behind, and he’ll no doubt have success doing just that, but an in-form Alexis can give defenders 90 minutes of dread because they’ll know one, two or even three failures won’t be enough to deter him from trying again…and trying things like this.

The biggest question mark, therefore, concerns the manager rather than the player.

By the end of Berbatov’s time at United, Ferguson had appeared to lose patience, leaving him out of the squad for the Champions League final in 2011 and using him very sparingly the following season. He knew the sort of player he was buying but perhaps misjudged his own adaptability when equipped with such an enigma.

Mourinho isn’t Ferguson, but has the same propensity to do a 180 on a player by virtue of relentlessly backing himself to do the right thing. The extent to which history repeats itself will depend on which Alexis he thinks he’s signng.