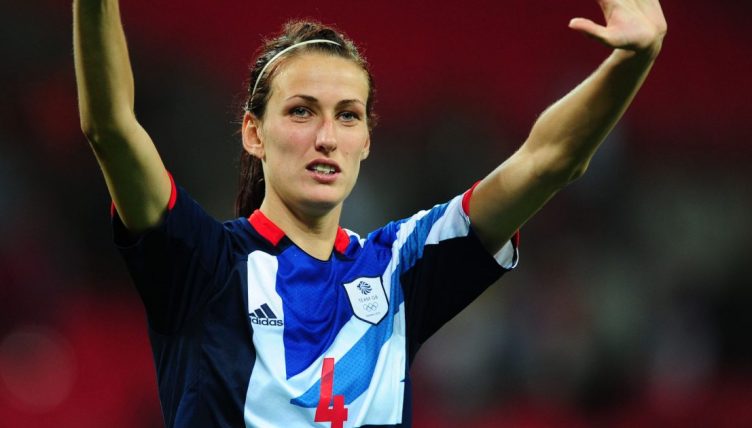 Speaking to BBC Sport in January, Jill Scott described the tattoo she got inked during London 2012 when she played in the first ever Team GB women’s football squad: “They look like five eggs instead of five rings!”

Nine years on, Scott will be an Olympian once more, having been selected for Tokyo 2021 by Team GB manager Hege Riise.

But not everyone is happy with the line-up picked by the Norweigian, who is due to leave her role as interim England manager in September: critics say that her inclusion of veterans like the 34-year-old Scott at the cost of the youngsters England will depend upon in the Euros next summer underlines her short-term outlook.

But personally, I will be delighted to see Jill and her eggs boarding the plane to Japan. I don’t want to know a major tournament without Jill Scott. Not today, not ever.

Because no one brings entertainment value like the Lionesses’ very own Peter Crouch.

Scott might be among the more experienced veterans, but she is unashamedly the most immature, and if there’s mischief or malarkey happening in the England squad, you can bank on Scott being the instigator.

Instead of balking at her age, we should welcome it, I say; like the Buffon of Banter, her reputation as team joker is many years in the making and maturing beautifully. Her impish spirit really came to the fore back in 2011, when she kept and published a video diary of the squad’s World Cup experience. Think the Blair Witch Project, but with more antics and even shakier footage.

Once the world had seen her going at an infestation of flies in the team hotel with a bottle of Febreze, there was no looking back. Scott had planted a flag in the ground and staked her claim as the Lionesses’ resident silly billy.

Class clown is a role traditionally reserved for the academically challenged, and in football terms this tends to mean using laughs to attract attention because you can’t do it with your feet. Think Gjanni Alioski, Benjamin Mendy – massive characters with funny bones stronger than their right peg. You’d treasure them in your five-a-side, but as soon as there’s a scrap for places they’re counted out of the contest for that final bib.

Meanwhile, in Jill Scott, we find one of the most talented players of her generation who consistently bosses it with her tongue in her cheek.

“Jill is the driving force of the English game,” BBC pundit and ex-Leeds Ladies forward Lucy Ward has said. “Most midfield players only affect one penalty box but Jill does both, scores goals and defends well. There are not many players in the world of women’s football with the physical capabilities of Jill Scott.”

She might be forgetful and clumsy off the pitch, but she can switch on for 90 and lead the team with calm and composure, while her dependability unlocks the talents of her team-mates by giving them the confidence to experiment and bomb forward. Oh, and she boasts an unbelievable engine. A talented long-distance runner in her youth, Scott lends the team plenty of crucial yards.

Perhaps most importantly, she plays with heart and character, and behind the scenes a spark of fun can have untold benefits on a group of players working hard away from home.

What’s more, with eyes on Team GB this summer, Jill’s natural charm and unrivalled patter have a genuine role to play in the growth of the women’s game.

After her star turn as pest exterminator in 2011, Scott was invited to become one of eight digital media ambassadors for the WSL, wearing her Twitter handle on her shirt sleeve in the hopes of encouraging an interactive, growing fanbase. It’s not hard to see why: Scott could chat about her favourite brand of toothpaste and I’d listen agog.

As someone who recently frittered 13 precious minutes watching Gareth Southgate’s men trying on M&S suits, I well know how the appetite for this kind of content builds during major tournaments. If the lanky Mackem’s banter isn’t on the FA’s radar as they strategise the development of women’s football, they’re not paying enough attention.

Obvious Jills football session 3 – Complete each drill 3 times practising both feet! We stay at home but we can still keep improving! Remember to tag me and my favourite videos get a prize! #jillscottfootballchallenge #obviousjill pic.twitter.com/HM8xJOSLM4

Utterly devoted to her sport, Scott actively inspires the next generation with initiatives like the Jill Scott Soccer School and her Obvious Jill Lockdown Skills Challenges she churned out on social media to keep girls engaged with football during the pandemic.

“Every time I put that shirt on, I play as if it’s going to be my last game because there’s so many girls wanting to play for England,” she told the National Football Museum in 2018.

“I’m getting a little bit older now so I know that eventually these will just be memories, so I want them to be the best memories I can possibly make.

“My advice for young girls wanting to get into football is do it firstly because you enjoy it and because you love it. And always play with a smile on your face.”

Riise was right to pick the fun-loving No.8 who loves coffee and Christmas and wears her heart on her sleeve; with a suitcase full of smiles and skills, Scott will prove the perfect ambassador for the women’s game at Tokyo 2021.