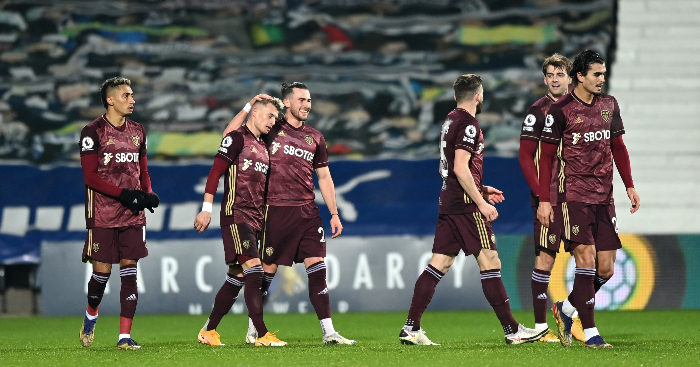 Leeds United‘s first Premier League match since 2004 was a seven-goal thriller away to the champions Liverpool, and they have not let up ever since.

Only West Brom have shipped more goals, and only their goalkeeper Sam Johnstone has made more saves than Whites youngster Illan Meslier.

None of this is normal.

Given the volatile nature of the games, the heavy defeats and defensive issues, there have been doubters, sceptics and naysayers.

“They’ll be found out soon enough” was the sentiment in some quarters, with comparisons to Norwich City last season, who received plaudits early on for their refreshingly front-footed approach, with plenty of eye-catching moments in their opening weekend 4-1 defeat to Liverpool before a headline-grabbing 3-2 victory over Manchester City.

But for all Daniel Farke’s side had flair, Bielsa’s men have genuine substance. Leeds have already won two more matches, scored four more goals and picked up two more points than the Canaries managed in the entirety of last season. There are still 22 games left to play.

Not since Reading in 2006-07 has a newly-promoted team picked up this many points at this stage of the season.

Not since Sunderland’s Kevin Phillips won the European Golden Boot in 1999-00 had a newly-promoted striker scored as many goals as Patrick Bamford.

While Phillips’ 30 goals accounted for more than half of the Black Cats’ total tally that season, Bamford has only scored a third of Leeds’ total of 30. He wasn’t on the scoresheet as five of his team-mates scored past West Brom.

Not since Kevin Keegan’s iconic Newcastle United, the original ‘Entertainers’ in 1993-94, has a side scored as many goals after 16 games. They managed 31, Leeds currently have 30.

Strangely enough, of all the Premier League sides to have come before Bielsa’s Leeds, Keegan’s Newcastle are the most obvious reference point in terms of the wild, often cavalier style.

“He just gets it,” Keegan told The Athletic in 2019, while watching Jurgen Klopp’s Liverpool.

“He understands what Liverpool is, and what their fans want. His teams always want to attack. Three up front, attacking full-backs. It’s lovely to watch. You come away from every game thinking, wow, that was entertaining. And isn’t that what football is all about?”

Unlike Bielsa, Keegan was never tasked with lifting spirits amid a deadly pandemic, but you can imagine him having the same point of view if he was still managing today.

“It’s not my responsibility, it’s my job,” Bielsa responded when asked if he felt a duty to provide some light relief as the city of Leeds went into a second full lockdown in November.

“If we can help to bring some entertainment or to make people feel better, then that would, of course, be great.

“I can’t give you a better answer as there are of course some people for whom watching football may not be help to ease their woes.”

Pandemic or no pandemic, Bielsa not only feels an obligation to entertain but feels that doing so is also the best route to results. It’s certainly proved to be the case at Leeds.

“Attacking football is the simplest way to victory and success,” he famously said earlier in his career. “In Argentina, we are aware of this, which is why we play open, attacking football.”

A mural of Marcelo Bielsa has appeared in Leeds 🎨

'A man with new ideas is a madman, until his ideas triumph.' pic.twitter.com/LddZXrOnM7

Newcastle famously fell just short of silverware under Keegan, but football is more than about lifting trophies.

Try telling a mid-90s season ticket holder at St. James’ Park that their memories of Philippe Albert lobbing Peter Schmeichel to make it 5-0 against Manchester United aren’t worth anything.

The stratified nature of Premier League football in 2020, in which Leeds will routinely come up against players that cost more than their starting XI, means that they’re unlikely to ever start challenging for the title as Newcastle did.

But for better and worse, Bielsa’s tenure will also leave the fans with memories that will last a lifetime – even if they never climb higher than midtable.

Few will want to relive the visit to Old Trafford, in which the man-marking pressing system broke down and allowed Scott McTominay to maraud through midfield and do his best Zinedine Zidane impression with two goals in the first three minutes as Manchester United went on to inflict a painful 6-2 thrashing.

Days like that are easier to stomach for the many occasions when it all clicks. And there are no better examples than the 5-0 victory at Sam Allardyce’s West Brom, who held reigning champions Liverpool to a 1-1 draw two days prior.

Bielsa’s side registered 75% possession at The Hawthorns, outpassing Big Sam’s Baggies 679 to 155, registering 14 shots to four and six on target to one. You’ll seldom see domination like that outside of clubs backed by oil-rich states or colossal conglomerate firms.

Not only was it a near-perfect performance in terms of control, execution and efficiency, but it was wonderful viewing too.

Never sterile possession for possession’s sake, players like Raphinha and Jack Harrison move the ball swiftly and incisively up the pitch with a sense of purpose. Every touch and pass is focused on getting the ball in the back of the opposition’s goal.

There might have been (more than) a touch of fortune as Romaine Sawyers passed the ball into the back of his own net, but the interplay involved in the subsequent four goals were pure class and skill.

There is so much to enjoy.

The total confidence in which a makeshift back four – a right-back at centre-half, an academy graduate with fewer than 10 senior starts alongside him, wingers converted to full-backs – build wave and wave of attack from the back.

Kalvin Phillips staking his claim to start for England at the Euros next summer by being in the right place to sweep up every time West Brom tried to pass out of their own half, before spreading the ball with the kind of poise that makes you start wondering when his Yorkshire Pirlo nickname stopped being ironic.

Supporters may well bristle at all the glowing column inches and effusive praise on Match Of The Day, straying dangerously close to the “everyone’s second club” territory that’s uncomfortably contrary to the club’s irreverent identity.

But it’s all because their style and approach are proving impossible not to admire.

Enjoy living through this, because it’s football that won’t be forgotten.