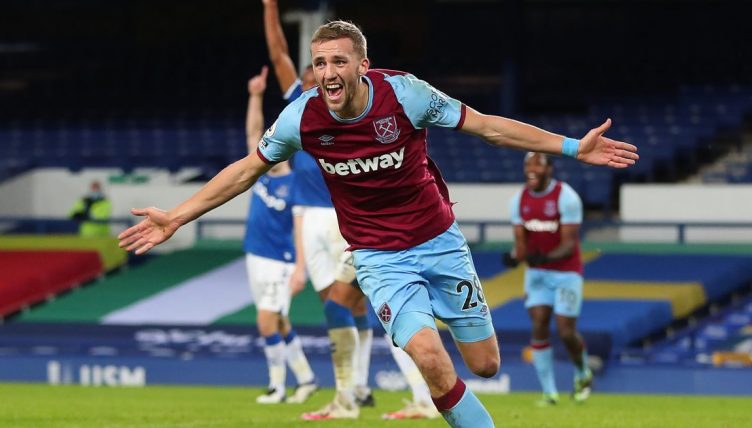 Tomas Soucek has been the breakout star of the Premier League season, scoring eight goals as West Ham chase an unlikely European place, and it’s hard not to begrudge his rise.

While Sean Dyche turns off the television and makes his family endure another round of ‘Lookalikies’, we’ve always considered Word Association to be a superior filler of time.

Say the Czech Republic and there’s a good chance any answer will be centred around cheap beer, stag-dos and a rich cultural history.

Ask someone of a West Ham persuasion and their mind will likely wander back through a rich tradition of Czech footballers that have represented the club.

From Ludek Miklosko, Andy Cole’s nemesis who was serenaded by geographically-challenged Hammers fans as hailing from ‘near Moscow’, to Tomas Repka who became a cult hero at Upton Park as the angriest footballer of all time, West Ham have been served well by players from this corner of Central Europe.

Enter Soucek. The 25-year-old midfielder has been a revelation since moving from Slavia Prague in January 2020, initially on loan before a £19.1million fee was agreed last summer, and his form has invited comparisons with Marouane Fellaini.

This does Soucek a slight disservice. While both share the distinction of goalscoring midfielder fronting an overachieving David Moyes team, the Czech Republic international offers more than thundering headers, wild hair and even wilder elbows.

In stark contrast to Manuel Pelligrini’s Hammers, who played with all the intensity of a group of 20-somethings on the Staropramen, Soucek has formed an effective partnership with England’s Declan Rice in central midfield.

It’s not just defensive solidity that’s improved. He’s scored seven league goals since the start of December and has eight in total this campaign – the highest total for any Premier League midfielder, excluding penalties.

Most amazingly of all, Soucek’s form has led to the marginalisation of Mark Noble, who made his West Ham debut in the week of Queen Elizabeth’s coronation.

If David Moyes needs another striking option later in the season… 👀 pic.twitter.com/juJStAVe6m

For all the column inches dedicated to how Bruno Fernandes has transformed Manchester United [Ed: guilty as charged…], Soucek has arguably had an even greater influence at West Ham. Any Fantasy Football manager with half a brain has him in their squad.

Despite all this, his appeal transcends club loyalties. In an age of inflated egos abetted by relentless social media platforms, Soucek appears refreshingly down-to-earth.

With no personalised-brand goal celebration and a style-of-play free of tricks normally seen in an Adidas advert, the midfielder is a throwback to a more innocent age. Indeed, when the first lockdown descended upon us, Soucek kept up his fitness by training on Hackney Marshes.

During an interview with The Guardian, he said: “I took a ball and some cones and I did normal training, but individually.

“My wife was sometimes giving me the ball and helped me enjoy it. Sometimes I enjoyed it with my daughter and her. It was a good time. I heard all about the tradition for playing Sunday League football there.”

This impression is only strengthened by his media appearances. Fresh from scoring the winning goal at Everton on New Year’s Day, during a game so dreary it could have been written by Ed Sheeran, Soucek confessed he was missing Christmas back home and the opportunity to eat potato salad for three weeks.

It would be no surprise if sales of the product have rocketed in the Newham area.

Tomas Soucek has been exceptional for West Ham since joining the club last January.

A constant threat from set-plays, the Czech international is the perfect foil to play alongside Declan Rice 2.0.

Potato salad all round 🥔 #WHUFC pic.twitter.com/ZOuQQUb4Zo

Then there’s his bromance with Vladimir Coufal. The full-back joined Soucek at West Ham last summer and has quietly become of the toughest defenders in the league – just ask Jack Grealish, who now sleeps with a nightlight following Coufal’s man-marking in a recent win at Villa Park.

The two bounce off each other, providing comfort during uncertain times in a foreign country. Although their double act is hardly Gascoigne and Merson, Moyes wrote in an Evening Standard column: “It’s difficult to keep Tomas and Coufal away from the training ground, such is their appetite to keep improving.”

It seems inevitable that Soucek will move on eventually. West Ham aren’t allowed to have nice things for long and Bayern Munich are reportedly interested. If nothing else, it proves we’re all essentially cheering for laundry.

Soucek has already shown he is capable of playing at the highest level. His performances in the Champions League against Barcelona for Slavia Prague and during the Czech Republic’s win over England in October 2019 had initially caught West Ham’s attention.

With the Czechs due to face England and Scotland at this summer’s Euros, the odds on either nation being ‘Souceked’ must have considerably narrowed.