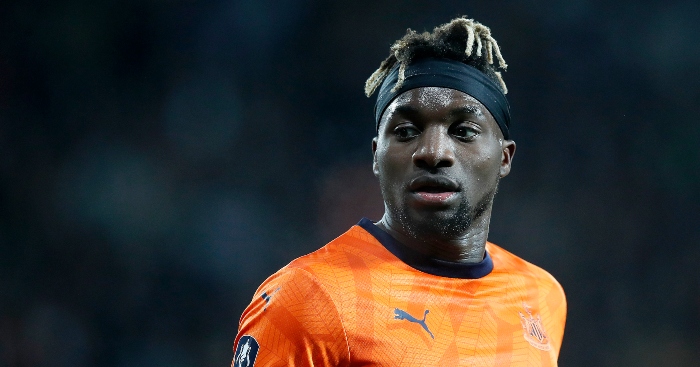 If it wasn’t for Allan Saint-Maximin, this would be a very difficult season for Newcastle United fans.

Not because of his goals or assists, necessarily, although those have been important in helping the club stay a comfortable distance above the relegation zone.

More important is the fact that, in a largely miserable season in an attacking sense, the Frenchman is a rare source of unbridled fun.

Newcastle have scored 24 goals in the Premier League this season, fewer than any other team, but it’s the source of those goals which grates as much as anything else.

Nine of those 24 goals have come from centre-backs, predominantly converting set-pieces. They’re the kinds of goals you can celebrate, sure, but not the kind it’s especially easy to derive great enjoyment from.

When you’re looking back on a season, Ciaran Clark beating an opposition goalkeeper to a high ball isn’t the sort of thing you’ll replay in your head over and over or chuck on a YouTube compilation alongside music from a flash-in-the-pan central European EDM producer.

Saint-Maximin, in contrast, feels like the kind of player who would ask to produce the soundtrack to his own best bits compilation. And he wouldn’t half-arse it, either.

Against West Brom in the FA Cup, it was Newcastle’s No.10 who helped make the decisive breakthrough to set up an eventual 3-2 victory.

Collecting the ball in his own half, he did the thing Allan Saint-Maximin often seems to do, granting himself tunnel vision to march through defences and set-up team-mates without even really acknowledging the presence of the other players on the pitch.

“Oh,” he says, “you wanted a chance to score a goal? Why didn’t you say so earlier?”

He drives half the length of the pitch and slips in Almiron. The Paraguayan finishes with aplomb! pic.twitter.com/tyFEaBNz9Y

The scarcity of genuine creativity can lead fans to overstate the value of those offering such a thing, but Saint-Maximin’s contributions wouldn’t look out of place in more exciting surrounds.

Indeed, if you were to transport him to a club with real-life human strikers, as opposed to whatever it is Newcastle use in that part of the pitch, you’d no doubt see his output increase.

His 4.3 dribbles per game put him third among all Premier League players, but it’s not just about that; it’s the willingness to try something different to what’s expected, even when the something different is only a subtle variation on your usual weaponry, and to still make it work.

"Are you calling me a liar? Is that what you're calling me? I've had no row with Saint-Maximin."

As a supporter, this leaves you in a difficult situation: you want to get excited about the shining light in your squad, but not too excited lest one of the bigger boys looks more deeply into what you have at your disposal.

It’s like discovering a great new restaurant round the corner from your house and trying to balance ‘telling everyone about it’ with ‘still being able to get a table whenever you want’.

Newcastle supporters know they’ve got a few more months of Allan Saint-Maximin this season, and potentially a few more years of the playmaker beyond the current campaign.

They also know how grateful any club in the division would be to have someone so talented and so willing to emphasise said talents at the expense of any sense of ‘respect’ or ‘extra defensive duties’.

The worst thing anyone could do at this juncture is attempt to force him to change for the benefit of anyone else.