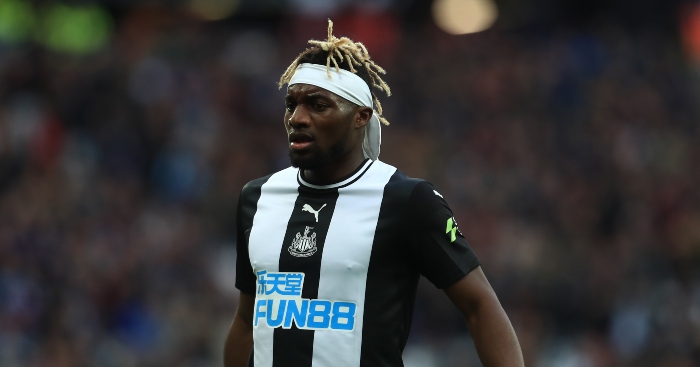 Most Newcastle United fans didn’t expect to go into the new season expecting the most exciting flair player in any given game to be wearing black and white, but Allan Saint-Maximin has seen to that.

In a side which is often set up to frustrate opponents – a factor of Steve Bruce inheriting the already strong defence curated by Rafa Benitez – an attacking player with a bag of tricks can feel like an unnecessary luxury, a sense that, if you’re not contributing efficiently, what’s the point in you even being there.

As Newcastle have recognised, though, there are more ways to contribute than mere goals and assists. Saint-Maximin has zeros in both columns across his first seven Premier League games, but it’s easy to underestimate the value of getting people off their seats in ways no other player can.

The former Nice player has completed an average of 3.6 dribbles per game in the league, a figure only bested by Wilfried Zaha. It’s a statistic which, if he is able to sustain it across the campaign, would leave him the top five for the Premier League for any of the last three seasons.

It’s not just about running down blind alleys, though. Some of the runs made by the Frenchman point to a willingness to make something happen, even when a successful outcome is unlikely. Given the safety-first approach predicted by a number of supporters, it’s been a pleasant surprise.

In the victory over West Ham United, Saint-Maximin wasn’t just the most entertaining player on the pitch but also, for the most part, the most dangerous. And yet, the standout moment was one which failed to pay dividends.

Coming up to the hour mark, and with his team three goals to the good, he attempted a rainbow flick… against one of the tallest players on the pitch.

The rainbow flick didn’t come off. Of course it didn’t – Sébastien Haller is 6’4″ and barely had to jump to avoid embarrassment – but that barely matters here.

While there would have been some added value in lifting the ball over a giant in such a disrespectful manner, the beauty can often come in the attempt as much as the end result.

In simply showing he believes he can beat Haller in such a manner, Saint-Maximin is showing himself to be someone who cannot be trusted… in all the right ways. You can’t shut out a man who doesn’t have any concept of a closed door.

Some wingers will get the best of defenders by grinding them into a pulp, twisting their ankles one way and the next to the point that they can’t help but be exhausted. Saint-Maximin does the same but to his opponents’ brains. This is someone who could give an opponent concussion just by repeatedly making them shake their head in disbelief.

We got a glimpse of this in pre-season when Newcastle took on Saint-Étienne at St James’ Park. The French side will have been familiar with Saint-Maximin after coming up against the winger during his Nice days, but knowing what someone is all about and actually being able to deal with it are two very different things.

At first glance, it might look as though he is simply toying with defenders for the sake of it, and that might be true to an extent, but every second they spend trying to figure out what’s going through Saint-Maximin’s head is a second not spent getting tight to the rest of the Newcastle team.

Sure enough, what begins as a pretty bit of showboating becomes the first stage in the goal which clinches victory for his team.

It’s not just the on-pitch actions which make Saint-Maximin such a star but everything that comes with it.

The trademark headband gives him the aura of someone who has stumbled off the set of a movie or a perfume ad and found himself on a football pitch with a role to play, to the point that every movement is carefully planned by a man who needs to earn the right to wear what he is wearing.

Even the name, Allan Saint-Maximin, carries some mystique. As sportswriter Zito Madu notes, “The extra “in” at the end makes it so elegant”.

It’s the kind of name you don’t encounter in football all that much, rolling off the tongue while making the eyes do a double-take. In that sense, it’s almost the perfect name for the player, whose smoothness in the sights of spectators is so wholly out of sync with the stop-start requirements of those with the misfortune of being asked to mark him.

As Benedict O’Neill wrote about Saint-Maximin on these pages, “everyone knows that a laissez-faire attitude to tracking back is not just tolerable, but more or less integral to being a true showman”.

Expecting Allan Saint-Maximin to meet the expectations to which you hold others is just naive. To even expect him to play football as we recognise it is missing the point. We’re glad Newcastle have recognised you just need to embrace the ridiculousness.