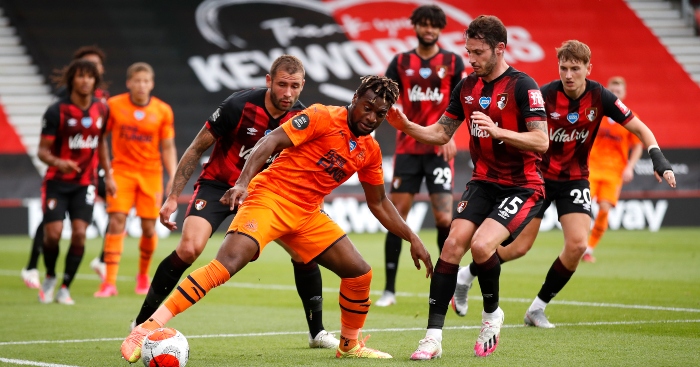 Newcastle United have been one of the surprise packages of the Premier League since its resumption, but when Allan Saint-Maximin is part of their squad, should we really be that shocked?

Behind-closed-doors football could have conceivably been an issue for a showman like the French playmaker.

However, in the win at Bournemouth – and in the games before, he demonstrated his principal audience member is himself. We just happen to reap the benefits by being in his orbit.

The eight goals Newcastle have scored in their last three games represents the same number they mustered in their previous 12 outings and Saint-Maximin has been involved in four of those eight, scoring in the home win against Sheffield United and chipping in with three assists as Steve Bruce’s team put four past Bournemouth at the Vitality Stadium.

While there was nothing wrong with his passes for Dwight Gayle’s opener and Miguel Almiron’s third for the visitors, it was his second assist – converted by Sean Longstaff – which acted at the purest example of Saint-Maximin at his best.

Adam Smith and David Brooks seem to have the situation under control as Saint-Maximin saunters down the left wing at what is effectively walking pace. Sure, it might look faster due to the constant momentum offered by the conveyor belt of stepovers, but the base speed is unaffected by the decoration his swiftly shifting feet provide.

The Cherries have correctly identified they need two men on the French playmaker at all times, but that’s not as useful as it might be when you’ve failed to pinpoint exactly why that’s the case.

His skill is the kind which, a lot of the times you encounter it, is the kind of thing you can find a way to stop.

But in the same way that a predator’s sight is based on movement, Saint-Maximin’s skill looks like it relies as much on defenders selling themselves as it does him taking the initiative himself.

This is the trap that Smith and Brooks fall into, convinced the end of the rapid flittering of feet is a sign that they’ve silenced him. That they’ve won.

Naturally, this is the point at which the second wave of devastation kicks in, with a more direct run to the byline before feeding the ball back for Longstaff to find the top corner.

It’s the product of Saint-Maximin knowing that not only do his feet work more quickly than those of his opponents, but his mind can get from A to B before theirs too.

With his unique style, both in how he plays and how he presents himself, Saint-Maximin ensures plenty of eyes will be on him whatever he does.

It’s not necessarily that he’s doing this specifically to be seen, though; it’s more a case of doing whatever he needs to feel comfortable while playing, and dealing with any additional attention which arrives as a consequence of that.

“When I do four against four in the street, it’s a little bit the same for me,” Saint-Maximin said in an interview with BBC Newcastle earlier in the season, and when you watch him play through this prism it makes a lot of sense.

This isn’t someone who only plays for himself, or only plays to the gallery; there’s an additional audience of his younger self.

You get the feeling, watching Saint-Maximin, that he never wants to stray from being the footballer he wanted to be when growing up playing football in the street, and this sort of player is impossible to play against precisely for this reason.

The healthy arrogance and lack of compromise tied to the playground alpha are often coached out of professional footballers before they turn pro, but Saint-Maximin has found a way to hide those qualities in his back pocket, convincing coaches he’s thrown them away only to bring them back out on the pitch.

If other players went down this route, you might be tempted to show your frustration with them, but you can’t stay mad at Saint-Maximin even on those occasions where it doesn’t come off.

And when it can work as well as it did against Bournemouth, why would you ever want to discourage him?