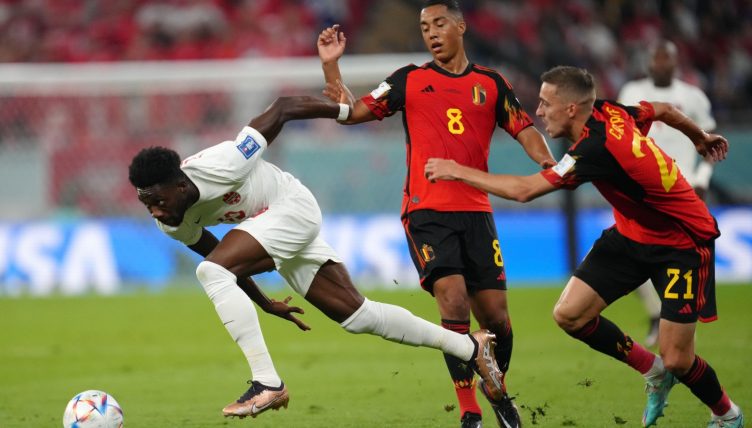 “De Bruyne wasn’t the best player on the pitch tonight,” roared Canada manager John Herdman in a heartfelt speech following their spirited performance in a 1-0 defeat to Belgium.

“He was in a white jersey.”

Herdman wasn’t specific, but he could have been talking about a number of Canada’s players. This was no lip service. It was the truth. They ran Belgium ragged.

De Bruyne himself doesn’t disagree. The Manchester City playmaker reacted nonplussed to receiving the Player of the Match award.

“I don’t know why I got the trophy,” he said. “Maybe it’s because of my name or something.”

It would’ve been irregular for a player on the losing side to receive it, not least one that missed a costly penalty in the opening stages, but it’s difficult to argue against Alphonso Davies. He was electric.

Herdman and De Bruyne might’ve had their own thoughts of who deserved the MOTM accolade, but we’d have loved to hear from Youri Tielemans, who was hilariously left eating the Bayern Munich roadrunner’s dust in one of the moments of the tournament so far.

Tielemans needs to retire after this cos ain’t no way 😭 pic.twitter.com/j08xL1RS1Y

We were treated to the perfect camera angle, positioned down on the touchline. If you’ve ever been seated there, you know it’s where wingers are at their most electrifying. The picture of the whole pitch doesn’t quite capture the sheer dynamism of top-level athletes.

Sit pitchside if you ever need it spelling that those that have made it to the top of the game are on another planet entirely to the best player you’ve ever played five-a-side with. Watch them up close.

You got just that with a dizzying flash of Davies’ white shirt. Three perfect touches, including one delightfully casual flick and feint, before zooming off into the distance.

Better yet is Tielemans left on his arse in the foreground, made to look like a hungover estate agent on Hackney Marshes on a Sunday morning.

It would have been so easy for Davies to let his shoulders slump after missing the early penalty. This was Canada’s first World Cup match in 36 years. And he is their talisman.

He’s by no means Canada’s only great player. The Maple Leafs are no one-man team, and coming top of the gruelling CONCACAF qualifying group is a testament to that.

Still, he’s the only one that arrived on the world stage as Bayern Munich’s most immediately eye-catching and exciting player, dazzling as they thrashed Barcelona 8-2 en route to the treble in 2019-20.

A kid born in a refugee camp wasn’t supposed to make it! But here we are GOING TO THE WORLD CUP. Don’t let no one tell you that your dreams are unrealistic. KEEP DREAMING, KEEP ACHIEVING! pic.twitter.com/GT4hjz4ebO

With that comes responsibility, and great pressure too.

That’s not easy: look at Davies’ former Bayern team-mate Robert Lewandowski, one of the greatest players of his generation, still awaiting his first World Cup goal after also missing from the spot. How many superstars of the club game have we seen shrink on the world stage?

“When you’ve got an $85million player with that sort of swagger, let him pick up the ball and take it,” Herdman told reporters following the defeat.

“It was a big moment. We were waiting to get that first goal. I’m proud of Phonzy, he’s picked the ball up. It’s a big moment, he’s carrying the weight of a nation and 36 years of waiting.”

Just look at Davies skip past Tielemans like he’s not there. You’d never have known it.