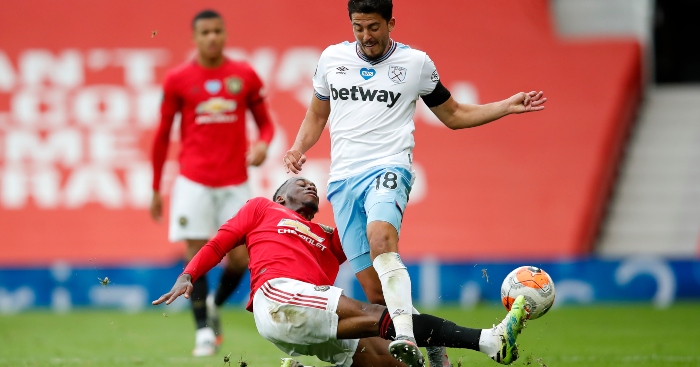 Anyone who’s ever played football will know a successful slide tackle is one of the most satisfying things you can do on a pitch. Goals are cool, sure, but have you ever slid 10 feet along a wet surface, hooked the ball off an attacker’s toe then jumped up and carried the ball out? There are few things more enjoyable in life.

Quite clearly, Wan-Bissaka understands that. In fact, he probably watches Sol Campbell’s slide tackle against Croatia every night before he goes to bed and prays for rain the next day. We know we do.

There are those who’ll say Wan-Bissaka shouldn’t have to make as many slide tackles as he does and that it’s actually a sign of bad, not good, defending. After all, Paolo Maldini famously said: “If I have to make a tackle then I have already made a mistake.”

But to those people we have two things to say. Firstly, stop being so bloody boring. And secondly, Wan-Bissaka doesn’t have to make this many slide tackles. He just wants to.

There was no better example of that than in Manchester United’s 2-0 win at Chelsea in February.

Playing on the right of a 3-4-1-2 system, Wan-Bissaka was high up the pitch and looking to stop Cesar Azpilicueta carrying the ball out of the back. The Spaniard took the wrong option of trying to knock it past Wan-Bissaka and beat him for pace, but that was never going to happen.

Sure enough, Wan-Bissaka looked to have won the race and, we’re fairly certain, could have simply stepped across Azpilicueta to intercept and gain back possession for United. But where’s the fun in that?

Now, ignoring the fact that a lot of the ‘tackles’ are actually interceptions and that ‘crazy’ might be a touch hyperbolic even by our standards, what nearly 300,000 views on the video tells us is that Aaron Wan-Bissaka clearly understands football better than Paolo Maldini ever could. Oh, and The Spider is a miles better nickname than The Captain so have that, Paolo.

And as much as we can appreciate the brilliance of a player like Maldini dealing with a forward just through clever positioning and quick movement, it’s not very exciting to watch. Schindler’s List is a brilliant film, sure, but sometimes it’s just nice to stick on a bit of Jim Carey, innit?

It’s what made Wan-Bissaka’s battles with Raheem Sterling one of the most intriguing individual contests of the season. One attacker desperately trying to beat a full-back; one full-back desperately trying to stop it from happening. Here’s a couple of minutes of highlights of that from this season. It’s ace.

Speaking about Wan-Bissaka after one such battle with Sterling in March, Jermaine Jenas said: “He must be so annoying to play against because he doesn’t give you a second to breathe. His legs are everywhere.”

Wan-Bissaka said in December 2019 he couldn’t remember a single United player dribbling him in training. That was admittedly before the arrival of the wonderful Bruno Fernandes, but never mind those stats that get shared about Virgil van Dijk, we think it might actually be impossible to beat AWB.

You might dribble past him or beat him for pace, but sooner or later one of those long legs are going to appear beneath you and nick the ball away. That’s just a fact of life now and we couldn’t be happier.