Alternative highlights of 19-20: A Newcastle fan getting his magpie out 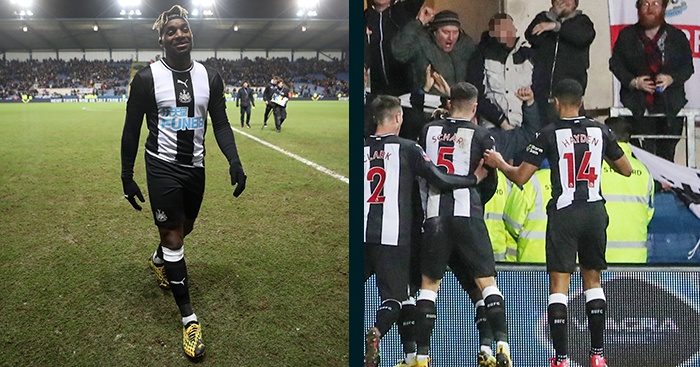 When Allan Saint-Maximin scored a dramatic winner against Oxford, one Newcastle fan whipped out his little magpie. In front of TV cameras.

Last summer, there was a gloominess on the Tyne that couldn’t be attributed to the usual fog.

Mike Ashley refused to sign Salomon Rondon on a permanent deal, and a disillusioned Rafa Benitez — feeling untrusted by his board — promptly left for China, leaving Newcastle without a manager or a No.9.

The replacements for Benitez and Rondon weren’t inspiring.

In came former Sunderland manager Steve Bruce, along with a Brazilian you’d never heard of, Joelinton, for the price of almost three Salomon Rondons.

Almost as an afterthought, the club wheeled in Andy Carroll to provide backup.

It was looking like a bleak season for the Magpies, and if they were going to survive, it was surely going to be a close-run thing.

But then, out of the murkiness came a flickering light. Too small to see at first. A few stepovers during some late substitute appearances. An ostentatious headband, its logo obscured by a sticker.

Allan Saint-Maximin had arrived, and he was going to make fans feel strange new feelings.

By February 2020, Newcastle could have little to complain about.

Bruce’s side weren’t Keegan’s Entertainers, but they were well clear of the relegation zone, and a holiday slump had just been offset with a dramatic 1-0 win against Chelsea.

In the 94th minute of that game, it was Saint-Maximin’s cross that found Isaac Hayden for the winner.

But the Frenchman had more late drama up his sleeve.

Two and a half weeks later, Newcastle made the long journey to Oxford for an FA Cup fourth-round replay, hoping to end their terrible recent record in the competition.

It wasn’t a neutral’s dream fixture, but the match was selected for coverage on BBC One.

And as if hyped up by The One Show and EastEnders before them, the two teams actually put on some great entertainment.

Newcastle went 2-0 up after half an hour thanks to Sean Longstaff and Joelinton, then Oxford made things interesting when Liam Kelly scored a brilliant free kick in the 84th minute.

When stoppage time began, Oxford threw caution to the wind, and goalkeeper Simon Eastwood even went forward for a set-piece.

He wasn’t needed. In the 94th minute, winger Nathan Holland scored a brilliant side-footed volley to take the game into extra time.

Could terrestrial television get any more dramatic?

Sadly for the League One underdogs, extra time was all about Allan Saint-Maximin.

With the clock at 116 minutes, the winger collected the ball on the left wing, beat three defenders, then thwacked the ball into the far corner.

Cameras panned to the ecstatic away crowd, and there, on your television screen — where Matt Baker had been cordially interviewing Al Pacino not three hours prior — a fan got his penis out and jiggled it around.

The fallout was nuclear.

Screenshots of the incident flooded the internet. Who was this man? And what, by God, had compelled him to helicopter himself?

Saint-Maximin himself saw the footage and made a joking reference to it. Jetro Willems dared his team-mate to do a ‘helicopter’ celebration for his next goal.

But then darker murmurs.

Police got involved, and Newcastle backed the long arm of the law over the palpating wrist of ‘Windmill Willy’.

We are aware of footage showing the clearly inappropriate actions of a supporter during the closing stages of Tuesday night’s Emirates FA Cup fourth-round replay at Oxford United.

We have been asked to assist the police in their efforts to identify the supporter in question and we will provide our full support.

Some people said the fan had been arrested and banned for life, which prompted Aston Villa captain Jack Grealish — a man who plays football matches in junior-size shorts — to leap to his defence.

Those rumours were soon dispelled, but nobody seemed quite sure whether the fan had been caught and, if so, how severely he had been punished.

Eventually the conversation moved onto other things.

Saint-Maximin grabbed two assists in the next round, a pandemic happened, then a Saudi Arabian consortium tried to acquire Newcastle, which prompted a small army fans to actually outdo Windmill Willy in their shamelessness… by putting little Saudi flag emojis in their Twitter handles.

Then, finally, silence. Nobody knows what happened.

Of course, it’s not like Windmill Willy broke new ground.

Streakers are as old as the game itself, and the rampant toplessness at St James’ Park is a key element of British football culture.

The fan, later dubbed the ‘Wank Buddha’, was arrested.

On the scale of unacceptability, Windmill Willy probably sits somewhere in between the Wank Buddha (lock him up, throw away the key) and the clownish streakers of yesteryear (funny but maybe not acceptable in the family-friendly stadia of 2020).

And Saint-Maximin, always a good sport, holds no grudges against the man who stole his limelight.

In July, the Frenchman posted a message of thanks to the people of Newcastle along with four photographs.

The fourth image in the sequence was, wonderfully, a helicopter.