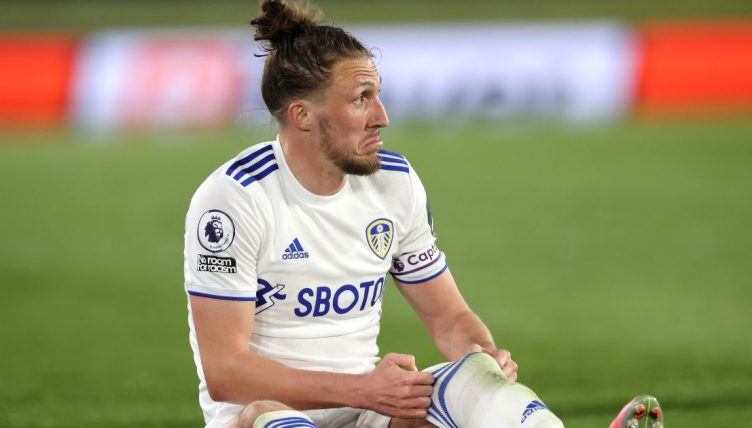 Think of the moves in football iconic enough to be named after the illustrious players that made them famous. Panenka, Cruyff, Maradona. Not only are they moments of pure artistry, but they just sound cool.

So it’s only fitting that the trademark move from Leeds United fan favourite Luke Ayling isn’t anything graceful or beautiful, given he has the name of a recruitment officer from Basingstoke. It just wouldn’t be right if The Ayling was some kind of balletic pirouette.

That’s not to say that the defender isn’t a good footballer, far from it – he is one of Marcelo Bielsa’s most trusted players, playing all 38 games and almost every minute as Leeds took the Premier League by storm in 2020-21.

Only Lionel Messi carried the ball further in Europe’s top five leagues this season, while it’s only a freakish contingent of world-class right-backs that kept him out of England contention.

Born in Lambeth with a decade of experience in the Arsenal academy, Ayling had to graft his way back to the top. There were four years at Yeovil, culminating with an unlikely Wycombe-esque promotion to the Championship in 2012-13, a feat he repeated a couple of years later with Bristol City, and four years at Leeds before they finally went up last summer.

That’s almost 400 career appearances in the second and third tiers before he eventually made it to the Premier League, where he’s looked right at home. But you get the sense that he needed that 10-year journey and all the lessons along the way with season-on-season improvement to be the top-level player he is today.

Essentially that’s the origin story of his signature move, the Ayling Flop, with the street smarts and dark arts borne out of doing what was required in trips to Port Vale, Crawley and Burton.

If you’re not familiar, it’s essentially the art of buying a cheap free-kick with his back to the opponent. It’s never quite a dive, because there’s always contact, having waited for it before hurling himself to the ground. It can be an invaluable asset when Leeds could do with a set-piece or – playing in the style they do – just a breather.

Anyone that follows Leeds is well familiar with the Ayling Flop by now. The Yorkshire Evening Post’s Graham Smyth wrote an explainer, while it’s an ever-reliable bingo square to scribble at if you’re following Phil Hay’s live tweets or Adam Pope’s commentary on BBC Radio Leeds. He’s even taught the skill to his daughter.

.@lukeayling_8 teaching his daughter the Ayling flop will cheer you up 😂 #lufc pic.twitter.com/6g9LxjXcks

It was one of the exciting little aspects of seeing this Leeds side hit the big time – what would that new-found worldwide audience make of seeing Bielsaball, Euro 2020-bound Kalvin Phillips, the Ayling Flop and the general concept of Gjanni Alioski? Were they ready?

Leeds hit the ground running, giving champions Liverpool a bloody nose in a 4-3 defeat on the opening weekend before swiftly getting vital points on the board from supposed relegation rivals Fulham and Sheffield United.

Yet in the early weeks of the campaign, the power of the Ayling Flop seemed to be waning, as if the sudden step-up to (supposedly) competent referees was his kryptonite. They weren’t buying what he was selling; he cut an increasingly agitated figure as he was repeatedly told to get back to his feet with play resuming all around him.

But the classics never go out of style. As he’s done throughout his career, Ayling honed his skills and just got better, as if he were an Olympic diver working on his form. Gradually the free-kicks started to come his way again.

In the final weeks of the campaign, we were treated to a couple of crackers.

The best of the lot came in the penultimate match away at Southampton, with fans allowed back in and treated to the flop in all its glory, when a loose ricochet looked set to fall to Stuart Armstrong in a dangerous area. Fortunately for Leeds, Ayling was in the right place at the right time.

The ball was within his reach; he might’ve tried a risky backpass to Kiko Casilla, or simply hoofed it out for a corner, but he knew an opportunity when he saw one.

This was a perfect chance to execute his trademark move, darting his body in front of Armstrong and waiting for the opportunity to go down. As sure as night follows day: whistle, free-kick.

You can only imagine how annoying it is for the opposition, but Ayling seems to get away with it thanks to his affable manner and cheery smile. Armstrong could only give an exasperated laugh, shared by referee Peter Bankes, at the daft injustice of it all.

After 16 years outside the top flight, Leeds’ first season back didn’t disappoint, with a fair share of highlights. But no season review would be complete without a couple of good Ayling flops for good measure.