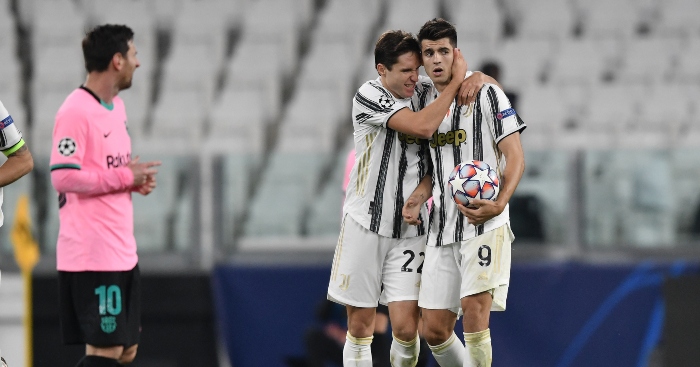 Some people seem addicted to misfortune in the same way that Jay Cartwright was addicted to personal embellishment.

For footballers, this can quickly become a vicious cycle. Your extremely well-coordinated feet suddenly become wooden, with the ball bouncing off them at random angles. Your mind suddenly outstrips your body or vice versa. Shots that would normally burst the net start missing the target by inches.

Alvaro Morata* has seemed addicted to misfortune for years now. Granted, his accumulated transfer fees paid by some of Europe’s elite clubs currently numbers an eye-watering £190million. However, it seems increasingly as if his goal record is a misprint and a prime example of the Mandela Effect.

Harsh? Perhaps. But Morata strikes a doleful figure these days. With the sad eyes of a Bambi impersonator and perma-slumped shoulders, the Spain international has had a general Eeyore vibe about him in recent years.

His current club Juventus still seem to have some faith in him, rescuing Morata from his Chelsea/Atletico Madrid purgatory and entrusting him to score goals in Cristiano Ronaldo’s absence.

Which, it can be argued, Morata did last night. In so many other ways, it was confirmation of his status as the world’s saddest footballer.

Three times Morata stuck the ball past Barcelona goalkeeper Marc-Andre ter Stegen, offering a tantalising glimpse of hope on his personal horizon. Sadly, your friend and mine VAR intervened on each occasion, ruling the forward was in an offside position.

There will be some that argue Morata is world-class at straying into offside positions. But upon seeing his disappointed reaction, strangely reminiscent of a boy being told that all the tigers at the zoo have died because he punched his sister, it was hard not to feel sorry for him.

If offside never existed, then Alvaro Morata would be a shoo-in for the Ballon d’Or trophy.

*Buy Alvaro Morata and thousands of other players on Football Index. 18+, UK and Ireland customers only, begambleaware.org. T&Cs apply.