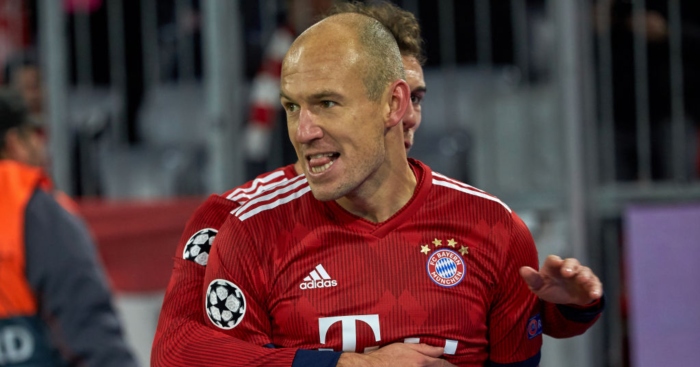 You might not know a lot about Arjen Robben, but you know not to let him cut inside onto his left foot.

Indeed, there are probably tribes on remote islands who know three things: where to find the nearest source of water, which berries are poisonous, and what happens when you let Arjen Robben cut inside onto his left foot.

And yet, time after time, we see the Dutchman do just that, often with lethal effects.

Even when defenders have one job, what felt like a simple task becomes a practical impossibility.

The most recent example came in Bayern Munich’s Champions League victory over Benfica, and it’s one of the best examples yet.

As Robben drives forward, surrounded by three defenders, you’d be tempted to get confused and angry as to why someone was wasting your time showing you a clip of a man winning a corner.

There’s no way anything of consequence could come from this spell of possession, even from Arjen Robben.

That’s what he wants you to think, though. It’s when Robben looks like no danger at all that he’s at his most dangerous.

The three defenders who approach him could be forgiven for thinking they have the situation under control. After all, if one of them isn’t able to marshal him out of play then there are two colleagues in reserve.

With Robben, though, you are never in a position of cutting off a particular route to goal. Identifying a path is useless when his only two locations are ‘here’ and ‘there’.

It’s something we’ve seen time and time again for Bayern, of course, and each time it happens we wonder how he was able to get away with it.

It’s not even a case of Robben being one-footed, but rather that once he has found space on his favoured foot, there is no such thing as an impossible angle or a position too far from goal.

During Bayern’s 2010 Champions League last 16 game against Fiorentina, for example, the Italian side must have thought they’d found a way to neutralise him… for all of about two seconds.

Yes, Robben was allowed inside, but he was still some distance from goal so there ought to have been time to regroup.

Either he’d need to drive forward with the ball, which would have left him up against a deep-lying defence unwilling to let him pass, or he’d have to drift wide and feed the ball into the box. At least from this distance there’s no way he’d be able to sh-

One thing we rarely admit about Arjen Robben is that defending against him must be exhausting, both physically and mentally.

First, you have the quick and sudden movements to contend with: the fake to go outside which really shouldn’t work based on how rarely it’s not a bluff.

If a footballer is ever sidelined with a strained eyeball, there’s every chance it’ll come from trying to keep tabs on Robben’s movements.

You can go into a game knowing what you should need to do to deny him, but in the moment, however hard you concentrate, his eyes somehow tell you this will be the time you go left and he goes right.

Then, once he’s cut inside – and he will cut inside – there’s that battle of wills as he drives as far left as he needs to get a shot away.

You’ll urge him to keep going, then keep going a little more, and he will. Except, while you think he is moving on your terms, it’s actually the exact opposite.

There’s only one answer to going up against Arjen Robben when he gets the ball in the inside right channel.

It’s not diving in, it’s not attempting to psyche him out, and it’s not even stepping out of the way in a weird double-bluff.

People have tried all of these things, and people have failed.

No, the answer to it all is simply to run. Run far away, out of the stadium, out of the country if you can. Only then will you be truly free.

Ranking the best Dutchmen to play in the Prem: Bergkamp, Van Persie, Kuyt…