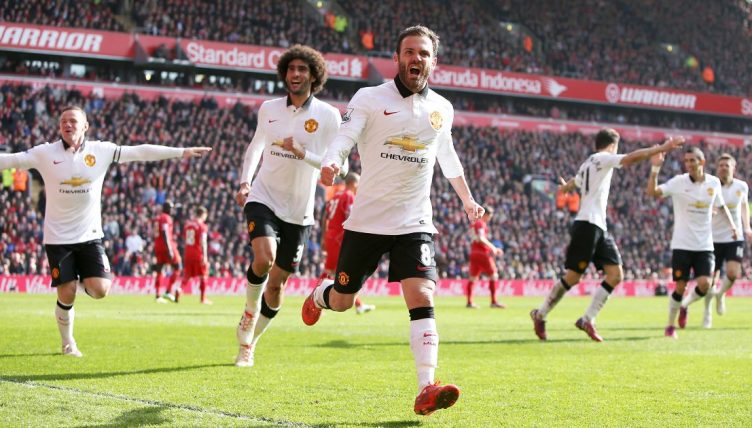 Having starred for Chelsea, expectations were sky-high when Juan Mata completed his £37.1million move to Manchester United in January 2014.

During his two-and-a-half years at Stamford Bridge, Mata established himself as the Premier League’s most creative force and won back-to-back Chelsea Player of the Year awards. The Spain international also played an integral role in their double success in 2011-12, registering assists for Ramires in the FA Cup final and then Didier Drogba in the Champions League final.

Despite his success and popularity, he immediately found himself on the periphery of the first team following Jose Mourinho’s return to Chelsea in 2013.

United have always looked to poach players from their domestic rivals and managed to take advantage of the situation, breaking their transfer record to complete the deal. The signing was deemed something of a coup for United, who were in the midst of a disastrous season under David Moyes and sat in seventh place in the Premier League table.

Having watched Mata score a brilliant volley and a curling free-kick against them, the Red Devils already had some first-hand experience of his talents.

If United fans weren’t excited enough, he then made a grand entrance at Carrington by helicopter while wearing an immaculate pocket square. James Bond, eat yer heart out.

Juan Mata flies in on a helicopter, meets his new boss. Via @ManUtd. pic.twitter.com/YEYae6fdyt

“I never felt that we would get that opportunity, I wasn’t sure that Chelsea would ever sell him to us,” Moyes said after the signing was completed. “Thankfully we got there and I am delighted he is here.”

United had signed a world-class footballer who was set to restore the club to former glories, except it didn’t quite work out like that.

Despite already having Wayne Rooney and Shinji Kagawa on the books at Old Trafford, Moyes thought that another No.10 would be the answer to their problems.

Like a square peg in a round hole, Mata was shunted out to the right wing and United continued to struggle in “a number of areas, including passing, creating chances and defending” under Moyes.

While the midfielder did give United an initial boost, his arrival was not enough to save the manager from the sack in April 2014.

“I always feel bad when a manager has to go because it means that you are not doing right, or you are not getting results,” Mata told the Manchester United Podcast in 2020. “So it’s not a nice feeling. So unfortunately he had to go. But of course, I’m very thankful to him.”

In truth, Moyes was on borrowed time before the helicopter’s rotor blades had even stopped turning, but Mata did at least prove rather more useful to his successors at Old Trafford.

He eventually became a favourite under Louis van Gaal, playing a key role in wins over Tottenham, Liverpool and Manchester City towards the end of the 2014-15 season.

Mata scored both of United’s goals in their 2-1 win at Anfield in March 2015, including a spectacular bicycle kick that assured him eternal cult hero status among their supporters.

“I guess it’s difficult, if you score at Anfield, for United fans to forget about that,” Mata told Standard Sport in 2020. “It was a very special day for all of us, for me personally.

That brief spell proved to be the highlight of Van Gaal’s reign, but his football was often as enjoyable as watching paint dry throughout 2015-16.

Alongside Anthony Martial and Marcus Rashford, Mata was one of the few players to provide some entertainment and was a beacon of light amid the darkness at Old Trafford. Renowned for his craft and guile, the Spaniard loved to express himself while some of his team-mates played like robots following their strict commands.

He showcased his unique innovation in a win over Wolfsburg in September 2015, registering one of the all-time great Champions League assists. Most players would take a couple of touches to control Bastian Schweinsteiger’s mishit shot, but Mata had the awareness and speed of thought to backheel flick the ball into Chris Smalling’s path.

We need to put the spotlight on this Juan Mata assist vs Wolfsburg again 🔥
pic.twitter.com/oeqTxIb6Mm

In the reverse fixture in Germany, Mata was infamously replaced by Nick Powell as United searched for an equaliser and were ultimately knocked out of the competition. From one extreme to the other, nothing summed up Mata’s mixed fortunes at United quite like those two fixtures against Wolfsburg.

During Van Gaal’s final game in charge, Mata showed his value once again by scoring the equalising goal in their 2-1 win over Crystal Palace in the FA Cup final. While Jesse Lingard’s stunning extra-time strike stole the headlines, Van Gaal’s tenure would have ended without a trophy if it wasn’t for Mata’s goal in the 81st minute.

Despite everyone presuming that Mourinho would dispense with the diminutive Spaniard when he replaced Van Gaal in 2016, Mata became one of a select number of players who got back into Mourinho’s good books. He became a completely different player to the one United bought from Chelsea in 2014, showing a willingness to defend and work hard for the team.

“Mata has adapted to the football I want to play. I knew since the beginning he would be an important player,” Mourinho said in February 2017. “I think he feels that confidence in me, that confidence in the game we want to try to play. So he is happy. He is happy on the pitch and you can see it the way he plays.”

The attacking midfielder helped the Red Devils to another two trophies in 2016-17, starting in both the League Cup and Europa League final victories. But he must still rue the fact that Mourinho arrived at Old Trafford rather than Pep Guardiola, the man who gave compatriot David Silva a new lease of life across Manchester.

During his time on the bench, it’s become easy to think about Juan Mata the person rather than the footballer. After all, he is one of football’s most likeable characters due to his charity work, weekly blogs and professionalism. But to solely focus on that would only be patronising. He’s far more than just a good honest pro with a pastoral role in the dressing room.

Juan Mata’s first touch is a thing of beauty. 😍 pic.twitter.com/rq8usVFRqc

He’s also reminded us of what he’s capable of during 2020-21, from the brilliant cameo appearance against West Ham to a cheeky trick shot following United’s win at Aston Villa.

With his contract expiring at the end of the month, the 33-year-old now looks set to leave Old Trafford with a respectable record of 51 goals in 273 appearances across all competitions.

“He’s such a top professional, a very good player,” Solskjaer said in May 2021. “It’s hard for me not to play him more than I have done. There have been circumstances this season, personal issues that made him less available, but still he is a top player.”

To the cynical observer, Mata was a luxury signing for United, and he hasn’t been able to consistently recapture the truly sensational form he had shown in west London.

That doesn’t mean he wasn’t a successful signing, however, and his occasional moments of brilliance have made him worth every penny.

Can you name the six Spanish players to appear for Man Utd in the Premier League?