Manchester United have been in talks with Ander Herrera over a new contract. They should give him what he wants, or he might kick them.

There’s a reason why Manchester United supporters see Ander Herrera as a future captain. Though he’ll be 30 next season, the Spaniard has been a key part of the club’s recent upturn in form, playing some of the best football of his life.

And while he has been in and out of the team during his time in Manchester, fans have rarely spoken of him in less than glowing terms. A willing runner, a fighter, a bit of a bastard, Herrera is everything a fan favourite should be.

It could have been very different though.

While Herrera still seems like a relatively new United player, he arrived as a part of Louis van Gaal’s large and illogical attacking influx of 2014.

It was a strange time, and one that could have ended with the Spaniard walking back out of the club along with Angel Di María and Radamel Falcao. 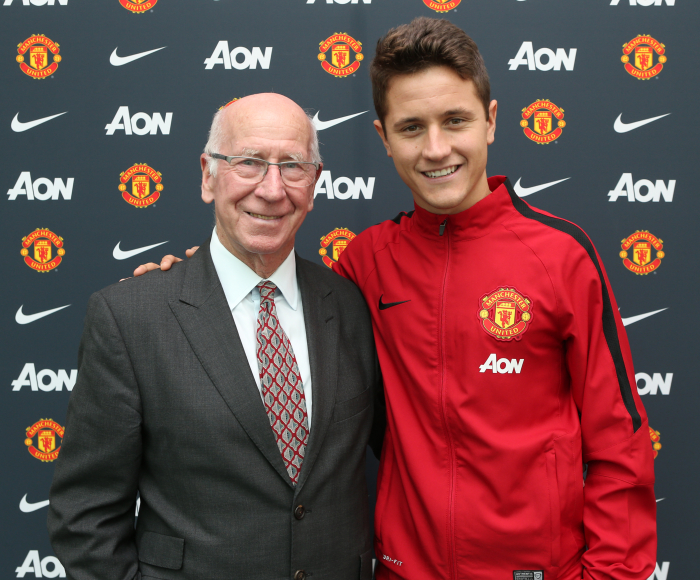 During United’s infamous 5-3 defeat to Leicester early in Van Gaal’s reign, for example, Herrera played behind an attack of Di María, Falcao, Wayne Rooney and Robin van Persie but ahead of a ghastly defence containing Tyler Blackett and Jonny Evans.

So fragmented was that side, it seemed like the club could have sold anyone and everyone.

In fact, since that confusing start, United managers have actually pushed Herrera toward the exit on more than one occasion. Just a year after signing the Spaniard, Van Gaal brought in Bastian Schweinsteiger and Morgan Schneiderlin to compete with him.

The manager even favoured Adnan Januzaj for a short while.

Herrera ultimately chose to stay, and his positive attitude when left out of the side has actually contributed to his popularity.

Van Gaal dropped him on several more occasions before getting the sack, while Mourinho effectively tried to replace him with Nemanja Matic — even after his Player of the Year performances in 2016-17.

But Herrera has rarely kicked up a fuss.

“I have always said the same,” he said recently. “If, one day, the manager decides to drop me, I will be ready to help the team for 10 minutes, 12 minutes or even two minutes.”

Ander Herrera has Making a 'what are you on about I didn't even foul him ref!' Face under Skills & Endorsements on his LinkedIn profile.

It’s an attitude that understandably endears Herrera to the Old Trafford crowd.

Rival fans, however, couldn’t feel more differently: the midfielder is an absolute terror, one of the most willing foulers in the league, and has a habit of bending the rules in other ways, always prioritising the win over moral integrity.

More than that, he seems to have a great time doing it. Unlike, say, Joey Barton, Herrera doesn’t kick people out of subservience to his personal demons. Rather, he uses cheating as a skill like any other.

That being said, it’s more than just the cheating that gets under people’s skin with Herrera. In fact, the midfielder could probably get away with a lot more if not for one thing: his face.

It’s hard to put your finger on why rival fans want to punch him so much, but Herrera falls into the category of disliked players whose manner and appearance are cited as much as their actions.

He is a footballer of the punchable face club.

I'd never tire of punching Ander Herrera repeatedly in the face.

While any tough-tackling Manchester United midfielder will be compared to Roy Keane, the particular composition of Ander Herrera’s face actually gives him more in common with a player like Nicky Butt.

Much like Butt, Herrera is a player who needs to throw in a few naughty tackles — not necessarily for tactical reasons, but to compensate for not being able to grow a beard.

It makes sense if you think about it: if defensive midfielders don’t have a scary face, they need to offer extra aggression in their actions.

Cruelly, however, that can contribute to greater animosity from rival fans. A baby-faced player who cheats will have the veracity of their ‘toughness’ constantly questioned; if he kicks, shoves and harangues, he will be accused of acting harder than he really is — one of the deadliest sins in football.

Premier League fans allowed Nemanja Vidic to be a hard bastard because he fit the part. Herrera, a mouse in comparison, doesn’t get that luxury.

But if we strip back the metaphor, and if we admit that 45-year-old Solskaer appears to have spent the last decade in a cave looking for his ‘precious’, time now well and truly catching up with him, we should also admit that the fresh-faced Herrera is more deserving of the nickname.

After all, doesn’t it work on a more literal level when talking about the Spaniard?

Picture it: it’s the 80th minute against PSG; Ander Herrera runs to the touchline and Michael Carrick hands him a note: “Throttle the attack,” it reads.

“It’s for the good of the team,” Carrick whispers.

That, as much as anything, is why he’s getting a new contract.