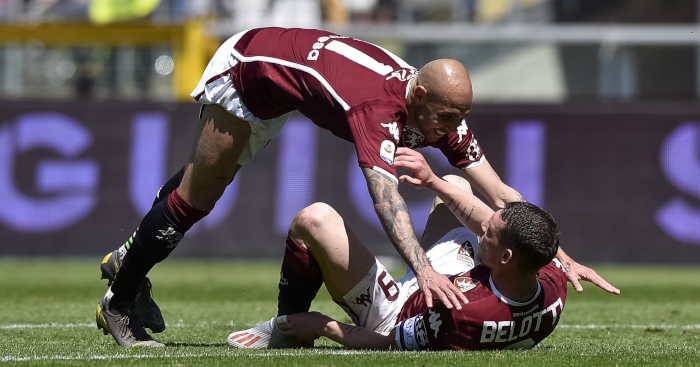 Ever since a 26-goal Serie A season saw him linked with anyone and everyone for a whole summer, Andrea Belotti has faded back into the background in terms of Premier League attention.

The Italian has remained at Torino, staying out of the limelight as the club finished last season in mid-table and his country missed out on the World Cup, but he hasn’t stopped plugging away.

Torino are threatening to crash the European party, having hovered around the Champions League spaces under Walter Mazzarri, and Belotti’s winner against Sassuolo has ensured their season is far from over with two games remaining.

During his hot season in 2016-17, Belotti became known for his aerial ability, hitting double figures for headed goals. But the Italian has always had more to his game.

He has needed to be persistent, too, working his way up through the lower leagues before ultimately breaking through in Turin, and his display against Sassuolo showed that persistence in action.

Early in the second half, with the visitors a goal to the good, Belotti rose up to connect with a powerful bicycle kick, only for goalkeeper Andrea Consigli to turn the effort over the bar. And this wasn’t the type of effort to get people complaining about the difference between a bicycle kick and scissor kick – it was a full body off the ground, throwing a bag off contraband off a moving freight train level of acrobatics.

The save was the sort of stop that can make you feel it’s not your day, but the Azzurri striker wasn’t going to give up just that easily.

By the time Lorenzo De Silvestri swung in a cross in the 82nd minute, Torino had brought themselves level for a second time. Belotti himself had scored the first equaliser, with Simone Zaza making it 2-2 after Pol Lirola had threatened to spoil the party.

Zaza’s goal had come just a minute earlier, too, so it would have been understandable had Belotti snatched at the chance. But as De Silvestri’s cross flies through the air, Belotti looks like a man for whom time is moving incredibly slowly.

Rather than rushing onto the ball, he calmly sets himself before lifting himself into the air and sending a powerful effort beyond Consigli’s dive.

After seeing the first effort tipped over the bar, Belotti might have been tempted to think simplicity was the key. After all, his bundled close-range effort for the equaliser demonstrated that it’s not all about the most spectacular finish.

However, instead, he decides the only thing wrong with the first bicycle kick was the elevation. He’d kept it within the goalkeeper’s reach, but if he was able to get over the ball this time the result would be different. And sure enough…

It’s like watching Free Willy soar through the air, with Belotti’s focus remaining on his own movement throughout and ignoring any potential obstacles.

Indeed, if there had been a defender blocking his path, you imagine the forward would have been able to slice straight through him as if he were a ghost. As soon as he makes the decision to leave the ground, the best the Sassuolo defenders and goalkeeper can hope for is to leave a beautiful corpse as Belotti shoots them down.

The debate isn’t about how to get in the way, it’s about where to stand to get the best view of your own execution. As with the Argentine defenders beaten by Frank de Boer’s diagonal ball for Dennis Bergkamp, or the Leverkusen players chasing back as Roberto Carlos lifts the ball into the path of Zinedine Zidane, the option of intervening was never there.

This was always going to be something that happened to you, rather than anything you would be able to stop from taking place.

Much like Andy Carroll’s comparable effort for West Ham against Crystal Palace in 2017, attempting to rationalise the move is missing the point: he has done it because he can, and if you’re searching for a deeper meaning it’ll take you a while.

A Champions League spot isn’t mathematically out of the question for Torino, but nor is a failure to gain a spot in Europe altogether.

If it ends up being the latter, Belotti may well decide to move to pastures new after more than 60 goals in four Serie A seasons.

And what team wouldn’t want a player who can produce what looks like a once-a-season bicycle kick, see it saved, and then find the net with a near-identical effort in the same half? Does it matter that trying a bike at all was ambitious as best? Of course not.

It’s a lesson in if at first you don’t succeed, try again – even if it’s debatable whether it was even a good idea to try in the first place.