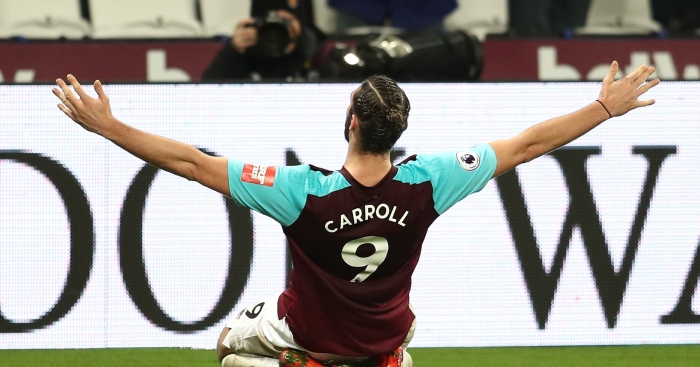 It’s January 2018, and more than 55,000 football fans have dragged themselves away from their new year’s hangover to watch two of the worst teams in the Premier League.

As the clock ticks into the 94th minute at the London Stadium, Marko Arnautović gets free down the left and curls a tantalising low ball across the face of Ben Foster’s goal.

It’s too far in front of Javier Hernández to get there, even on the stretch, but there’s another West Ham player coming in far beyond the back post to slide in right-footed from an absurd angle. It can’t be Andy Carroll, surely – what would he be doing there? Oh, wait…

The goal demonstrated the best and worst of Carroll at once: a fantastic and vital effort, sure, but one he has only scored by denying himself the chance to score a much easier goal.

Carroll should have been in the middle anticipating a ball into the box, not steaming forward on the overlap to score from a near impossible angle with his wrong foot.

Just six of Carroll’s 53 Premier League goals have come with his swinger, and he has never been a man known for subtlety or precision. He has, however, become known for an ability to produce the unexpected, so much so that he frustrates as much as he impresses.

It used to be the case that, when you signed Andy Carroll, you knew what you were getting: a constant aerial threat outside the box, and a constant danger in both areas.

However, as his time at West Ham has drawn on he has looked like a man on a mission to prove us wrong in almost every respect.

We can perhaps trace this back to the draw with Burnley in 2017, when Carroll was handed two yellow cards for what can only be described as extremely Carroll-esque challenges on James Tarkowski and Ben Mee within the opening half-hour.

Even when he scored his usual type of goal, like the header earlier in that West Brom game, you felt he needed to show he could do other things too.

Like a shock-jock comedian realising the world has moved on from his brand of humour, Carroll began playing like a man who had discovered, at the age of 28, that he might need to expand his range.

The problem of course, is that it’s much harder to develop new skills at 28 than at 18. 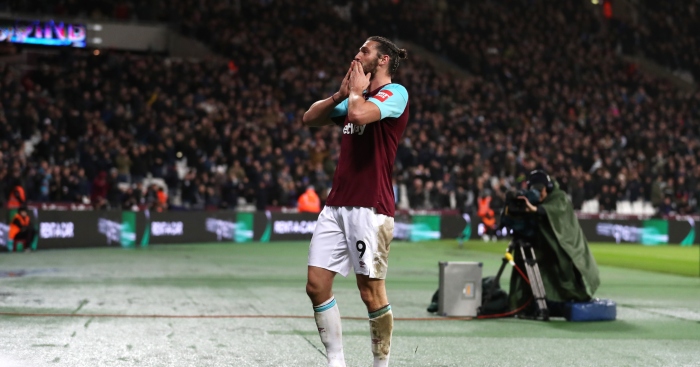 West Ham fans will have lost count of the number of times they see their team on the attack, in prime position to loft an inviting ball into the box, only for Carroll to be out of shot, admiring the ball he played from deep to start the counter in question.

This won’t even necessarily have started with a defensive corner – Carroll has developed a knack of drifting towards his own goal without even noticing it, eventually popping up on the edge of the box in acres of space, as if to question how the opposition were able to miss that 6ft 4in mass of hair just hovering in the middle distance.

And yet you can’t be angry with Carroll. There’s something loveable about a man seen as one-dimensional for so long attempting to better himself, even if it looks like he hasn’t bothered to ask anyone how he might actually go about it all.

In the recent FA Cup win over Birmingham, as he tried and failed to round Lee Camp, it was hard not to extend some sympathy towards a man who was clearly just trying something new – getting angry at Carroll for trying this is like chastising a baby for trying to learn a new language.

Failing at something no one asked you to try ought to earn you some sympathy, just as long as you do what you’re supposed to do as well.

Carroll’s late arrivals into the box seem to be getting later by the week, but that’s not always a bad thing, as we saw against Stoke City late last season – incidentally, his only league goal since that winner at West Brom.

For someone who doesn’t always seem to know how his feet work, he has a real knack for making sweet connections, be it his acrobatic volley against Arsenal in 2016 or the equaliser against the Potters which all but secured West Ham’s Premier League status for another year.

Let’s not dwell on the fact that, without so much of his nonsense, they might not have been in such deep trouble to begin with.

This, indeed, may be why Carroll continues to be linked with teams in the upper reaches of the Premier League, those clubs who won’t need to rely on regular contributions but who can benefit from him popping up when you least expect it.

He will bail you out of a mess of his own creation, like a dog yapping to stop you from stepping in his own faeces, and you can’t get mad at him because you know he has your best interests at heart.

It might be difficult to justify such a contribution from a £35million striker, as he was at Liverpool, but at this stage of his career do we really need any more from him?

An ode to resurgent Robert Snodgrass, a man who can see through walls