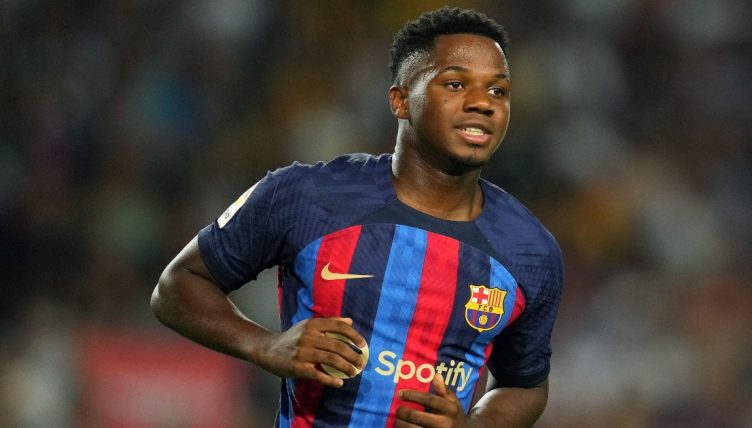 It was the kind of performance that defines matches, seasons and careers.

Barcelona, having spent the GDP of a small country in the summer – despite their well-documented financial troubles – were being held at Real Sociedad as the clock ticked over the hour mark. Just like they were held by Real Vallecano during their season opener.

Robert Lewandowski scored in the first minute but otherwise looked starved of service. Frenkie de Jong was underwhelming. Ferran Torres put in the kind of lacklustre display that’s fast becoming his trademark at Barcelona. And La Real were gaining the initiative.

Thirty minutes later and Xavi’s side had romped to a 4-1 victory at one of Spain’s toughest away venues.

Anybody subjected to a half-hour power cut would be forgiven for thinking the final scoreline was a misprint but Barca had made their early statement of intent. And nobody disputed the reason behind their impressive win; step forward Ansu Fati.

Fati has struggled to keep fit following knee surgery in 2020 and missed a large chunk of last season with a hamstring problem.

The Spain international was handed Barcelona’s No.10 shirt after Lionel Messi’s departure for PSG last year, which would seem an unnecessary burden if not for the fact that the 19-year-old is awe-inspiringly good.

And, after replacing Torres in the 63rd minute of Sunday’s clash at the Anoeta, Fati set about making himself indispensable to the Barca cause.

Within minutes of his arrival, the talented youngster had controlled a pass fired at him with the ferocity of a million suns, drew a Real Sociedad defender into his orbit and made him look a fool with an impetuous flick to the path of an unmarked Ousmane Dembele.

Dembele dare not have missed. Los Txuri-Urdin had been undone by a piece of wizardy from Fati.

A fantastic back heel from Ansu Fati provides the assist and Ousmane Dembélé smashes it home to make it 2-1 to the visitors 🔵🔴 pic.twitter.com/iLHwyaERm0

Having rendered the opposition disoriented and the Basque crowd mute, Fati began to press home the advantage with a rarely-sighted ruthlessness.

After combining with new signing and fellow substitute Raphinha on the left flank, the La Masia graduate collected a sloppy clearance, arrowed a header into Pedri and demanded the ball back.

Upon receiving it, Fati played a delightful one-touch pass into the onrushing Lewandowski. Another goal – 3-1. It had taken him just five minutes to bend the course of Barca’s season to his will in Messi-esque fashion.

Robert Lewandowski gets his second with a typically clinical finish, and Barcelona have some breathing room 👏 pic.twitter.com/CcAuxdaGUM

Barcelona were purring like an overly-affectionate cat by now, toying with their demoralised opponents with dainty flicks and their telepathic understanding of the football.

But something still felt incomplete, their cake missing a delicious cherry to elevate it to greatness; the absence of Fati from the scoresheet was glaring and unjust. Until the issue took care of itself.

With seven minutes remaining, Lewandowski turned provider with a cheeky backheel into Fati’s destination of travel. His finish somehow surpassed the assist; controlled, calm and nestling unerringly in the corner of the net.

Job done. Fati took the acclaim of his team-mates and the Barca supporters who’d made the 352-mile trip to San Sebastian on a Sunday evening. He’d made it worth every inch.

Two assists, now he gets his goal, and he's staking a claim for a regular starting spot 👀 pic.twitter.com/mV5kXVh5VP

Far from being cowed by wearing the No.10 shirt, and all the expectation that comes with it, Fati appears to be relishing the challenge and his performance against Real Sociedad will surely move him ahead of Torres and Raphinha for a place in Xavi’s starting XI.

After all, this is a player who set records as the youngest goalscorer in the Champions League, for Spain, and in El Clasico – though his international record has since been surpassed by team-mate Gavi.

“I’m working to achieve it and I have no doubt that with work and sacrifice I will achieve it,” Fati told TV3 in July when asked whether he could return to his pre-injury form. “Right now I’m not 100 per cent, but I’m very close.

“It’s normal that when you come back from an injury you play very cautiously. But that’s only the first minutes of the first game, then you forget it. Right now, I’m playing without fear.

“I know where I’ve come from and everything I’ve done to be here. I never thought about quitting. I’m very young, and I have my whole future ahead of me.”

There was nothing cautious about his cameo against Real Sociedad. Instead, here was a player underlining exactly why he’s been called the ‘new Messi’ in some quarters.

If he can steer clear of injuries, the hype might eventually be justified. All we hope is that there is much more of this to come…

READ NEXT: A brilliant Xl of Barcelona players aged 23 or under: Fati, Pedri, Gavi…