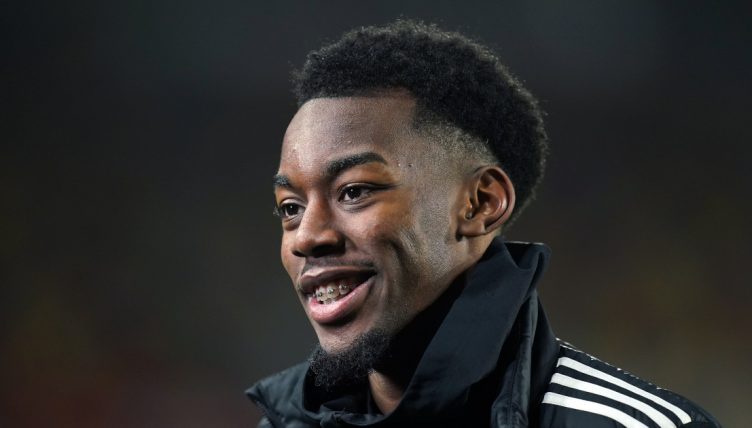 Salmon are fascinating. Against the current, and against all odds, they leap up waterfalls to return to the place where they were born.

To see salmon fully on their run is quite rare, but that’s alright; we’ve got Anthony Elanga who has leapt into his rightful home in the Manchester United first team.

Some United fans were confused as to why the 19-year-old Swede did not go on loan in early January. There were certainly offers, and the logic followed that he could do with the senior minutes.

Those concerns were answered when Elanga headed United in front against Brentford.

But quietly Elanga had been proving himself behind closed doors at United for a number of years. When Ralf Rangnick needed a youthful thrust, Elanga was the natural next in line.

For the past year, Elanga had emerged as one of the elite talents in the Manchester United academy and had rightly earned himself a spot on the fringes of United’s squad.

Before Rangnick, Ole Gunnar Solskjaer had begun incorporating the next generation of United’s talent into first-team training and Elanga was the one who seemed the readiest.

Physically he has put in the work to ensure that he can go toe to toe with an average Premier League player, with videos over the summer emerging that showed him working on himself in a manner many other youngsters overlook.

It is the reason why Hannibal Mejbri, who Rangnick has openly said will soon get his chance, has not yet made his full Manchester United debut and Amad Diallo has had to go to Rangers, despite their supreme technical talent.

But that is not to say Elanga lacks technique, for the opposite is true.

Playing for the Sweden Under-21s last year he scored a wonderful goal on his debut that highlighted his natural talent.

Receiving the ball in the far-left corner of Sweden’s attack, he stared down the oncoming defender like he was a Viking challenging the Finn to a duel that he knew he would win (yes, Vikings didn’t come from Finland but allow it for the sake of the metaphor).

The Swedish Viking was markedly more confident than his Finnish counterpart. He wielded his axe-of-a-leg with strength and ability that far outranked almost all others on the pitch.

With one defining slash Elanga sent the ball cutting between two defenders into the feet of another in a yellow shirt before dashing through the gaping wound in the Finnish defence he had created.

Receiving the ball back he drove forward before powerfully delivering the killer blow, sending the ball curling around the ‘keeper in a brutally efficient manner.

He has scored seven times in eight Swedish Under-21 caps, preparing himself for an inevitable call-up to the senior side.

But for now, he is content with pillaging the pitches of England.

Both his senior goals, against Wolves last season and Brentford earlier this year, demonstrated a unique ability to sneak up on defenders and strike a single, effective blow.

It explains why his first two goals have been headers, demonstrating a fantastic ability in the air for a small player.

Against Wolves, it was as if he transported himself from seemingly nowhere to appear on the wrong side of Rayan Ait-Nouri, who tried to push Elanga down expecting to meet the little resistance of a normal youngster but instead was shrugged off by the Swede who powered his header home.

Against Brentford, the 19-year-old was a dagger sneaking into the side of the Brentford defence to break their resolve and open up United’s full attack.

He was quicker both mentally and on the pitch than his marker Mads Roerslev, who realised too late what the youngster was doing.

An incisive ball from Fred and a touch to control the ball saw Elanga craft himself a golden chance.

This was his moment, this was where he belonged, and he leapt like a salmon to take it.

A moment of quality gives Man Utd the lead vs Brentford 🔥

Fred with the pass, Anthony Elanga with the touch and finish!

Rangnick's side badly needed that… pic.twitter.com/Ncfj0ISYRs

“He’s been a top kid, waiting his moment, training really hard and he deserved the chance he got today and he was, for me, one of the best on the pitch. He gave everything,” Bruno Fernandes marvelled.

“He was outstanding in the second half, put in a lot of work against the ball and then scoring the first goal,” Ralf Rangnick said after the Brentford match.

“I must say from the very first day from my first training session, he showed up.

“l had heard his name before and I was in my hotel room watching videos of him on YouTube, I thought this boy was really good.

“He was almost on his way out on loan, I told him you will not go out on loan, you will stay here. He has developed in training.”

The second half of the season will see Elanga become of increased importance to United.

He has set the precedent for the new generation of young players coming through; work hard and you will get your chance.

Mejbri, Charlie McNeil, and Zidane Iqbal are waiting; they must leap like Elanga to make Old Trafford their rightful home.