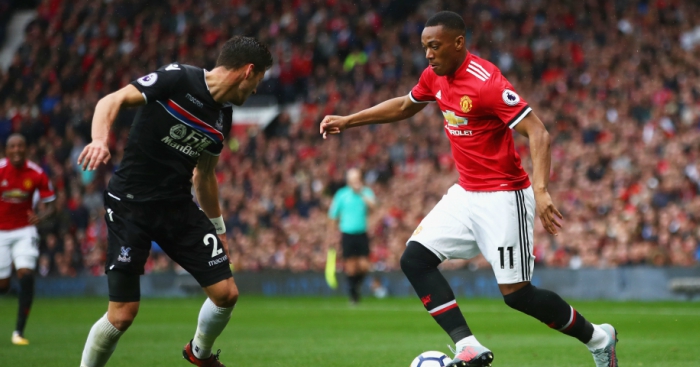 On Saturday September 30, just seven games into the Premier League season, Anthony Martial produced one of the most significant moments of the 2017-18 season.

Manchester United beat Crystal Palace 4-0 at Old Trafford to maintain their unbeaten start, while Romelu Lukaku scored again to equal Andy Cole’s club record of seven goals in his first seven Premier League matches. But that wasn’t the highlight of the weekend.

Nor was Harry Kane scoring twice at Huddersfield that same day to make it a remarkable 13 goals for the month of September.

And nor was Kevin de Bruyne’s classy winner that helped Manchester City cling onto top spot going into the international break.

In fact, the highlight of the weekend wasn’t even a goal. Oh no.

The highlight of the Premier League’s seventh gameweek came when Anthony Martial vanquished Andros Townsend with the nutmeg to end all nutmegs.

For Townsend, it was the spoiled cherry on top of the shit sandwich that was his afternoon.

The England international had already been caught out for United’s second goal, allowing Ashley Young to cut inside from the left flank and deliver an inswinging cross for Marouane Fellaini to head home – a move made even worse by the fact that the dropped shoulder and movement inside is Townsend’s own trademark move.

But we’re not here to talk about the recipient of a nutmeg – my friend Zito Madu has already written the definitive text on the matter, noting that, as a meggee, ‘You can destroy the evidence but you can never erase the crime.’

No, we’re all about positivity, so rather than dwelling on the self-reflection that comes with victimhood, I’ve decided to turn my attention to Martial’s achievements. Yes, achievements plural.

Cast your mind back almost 12 months, and you’re transported to Stamford Bridge and a low point for Martial, just three days after the Frenchman had found the net in a 4-1 win over Fenerbahce in the Europa League.

Chelsea had taken a 4-0 lead over Manchester United and brought on Nathaniel Chalobah. Within minutes, the youngster – making his third Premier League appearance – collected the ball on the right touchline and nutmegged Martial.

Seconds later, if that, he nutmegged Martial’s team-mate, Ander Herrera.

It’s comparable to going hiking with friends and being encountered by a bear. You don’t have to outrun the bear to survive, you just need to outrun your friends.

That might sound extreme, but desperate times call for desperate measures, and Martial’s exploits show he’s a fast enough learner.

The obvious response is to call for safety in numbers, joining Herrera in mourning for your respective afternoons and nursing each other’s wounds. Obvious, but wrong.

A year or so before that, Martial had been on the right end of a nutmeg, consuming the soul of Wolfsburg’s Christian Träsch in the Champions League.

That skill had been one of the factors in the forward’s inclusion in the vote for the cover of FIFA 17.

He was one of four contenders, alongside Chelsea’s Eden Hazard, Borussia Dortmund’s Marco Reus, and James Rodríguez, then still on the books of Real Madrid.

None of these players were known for their prolific goalscoring exploits, with Hazard the only member of the quartet to ever score 20 goals in a league season.

They were in contention for their skill and flair. They were there because when they did score, they did so with finesse – like James’ World Cup strike against Uruguay or Hazard’s solo effort against Liverpool.

Establishing yourself as one of FIFA’s most skilful and innovative players is a badge of honour; the equivalent of playground bragging rights, except as a grown-up.

You don’t lose bragging rights by losing your own touch, but if someone else embarrasses you then you’re in trouble.

The correct thing to do, as Martial has established, is to pay it forward, nutmegging as many opponents as possible until everyone forgets you were ever on the receiving end.

Then he did this to Mame Biram Diouf – not technically a nutmeg, but possibly even more humiliating.

His choice of victims is no coincidence, either.

Nutmegging a defender is one thing, but there’s every chance they will respond unkindly to the treatment and attempt to break your legs so you never attempt the same thing again.

Träsch was the exception – an example of Martial showing people what he was all about during his first season at Old Trafford – and he knew better than to try that twice.

No, instead you want to do it to an attacking player. Someone who uses skill and precision as two of their biggest weapons.

Someone who will respond not by acting out but instead by immediately accepting they’re finished, that there’s nothing they can do short of returning the favour, and even then it won’t be enough.

To respond to a nutmeg with aggression is to surrender any moral high ground when it comes to your own reputation with the ball at feet.

That’s why Martial did what he did to Townsend, and why Paris Saint-Germain’s Adrien Rabiot chose Lionel Messi as his victim in last season’s Champions League.

Messi’s response is one of humility, standing off and hoping his opponent makes a mistake.

If that’s all that the world’s greatest can do in such a situation, it’s no surprise to see Andros Townsend – a man once described as a ‘Farmfoods Arjen Robben’ – was never likely to be able to do more than keep walking.

It’s an interesting approach, I’ll admit, but Townsend’s refusal to turn back towards play carries some internal logic.

From his point of view, if he doesn’t turn around then he’s intentionally failing to acknowledge the act at any level. He’s wrong, of course, and he’s already lost, but we can’t fault him for trying.

We know what will come next, of course. Townsend will have opponents on red alert for more of the same in his next Palace game, and Martial inflicting this on him before the international break is especially cruel.

Two full weeks of pressure building up, knowing you need to deliver with precision on your return and – worse – you have to wait for the chance.

And Martial? Well it’s safe to say he has well and truly got his mojo back.