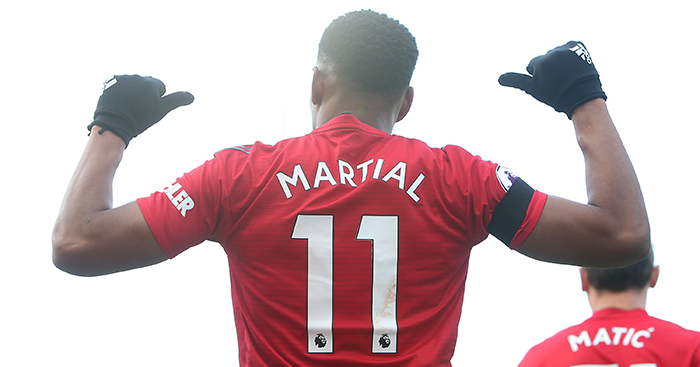 The best footballers in the world have no qualms about wearing their influences on their sleeves, and Anthony Martial is no different.

Luis Suárez has spoken of looking up to Gabriel Batistuta, for example, while Sergio Agüero has spoken of watching and wanting to be Michael Owen when he was younger.

However, the best forwards in the game are those who take a great number of influences and use them to mould a fresh new identity for themselves – one strong enough that the next generation will end up invoking their names when reflecting back on their childhood heroes.

Martial was always destined to draw comparisons with Thierry Henry upon arriving at Manchester United from Henry’s former club Monaco.

It wasn’t exactly a lazy comparison, either, though there’s no doubt some will have been relieved when the dots they blindly joined before watching the youngster play were quickly vindicated.

There’s the fact that he’s a speedy forward comfortable with cutting in from the left, of course, but the early coup de grâce arrived on Martial’s debut against Liverpool when he produced the kind of finish Henry was able to pull out at will during his time in England.

It was a reverse-Robben, of sorts, but its relative rarity makes defenders less likely to see it as a foregone conclusion.

The finish, for Martial, is more like a tennis player’s drop-shot: he knows how effective it can be when used at the right time, but he also knows overusing it will hurt him in the long run.

His goal against Fulham, though, drew some different comparisons. It had that Henry element of opening up his body, but Manchester United fans were drawn to two other goals of years gone by.

The strength to hold off Denis Odoi and change of pace to waltz past Maxime Le Marchand as if he wasn’t there was pure Martial, though.

When he’s on his game, he will treat his opponents as little more than props for a game of one-upmanship he’s playing with himself, in this case effectively telling the Fulham duo to wait until the last moment to remove their mental blindfolds and watch the very thing they were supposed to prevent.

Even Sergio Rico is little more than a bright orange guy rope, helping the Frenchman perfectly pitch his shot while keeping it the right side of the blinding white goalpost.

As he strolls away, his job done, the Manchester United man has the satisfaction of someone who never considered a lesser outcome was possible.

Martial has shown under three managers that there’s a great deal more to his game; be it his displays of physicality when called upon or the playful nutmegs and sharpness of mind which he pulls out time after time.

And if that wasn’t enough to draw comparisons with Cristiano Ronaldo, scoring a solo goal of this quality against this specific opposition was enough to level up the likeness.

In Ronaldo’s example, the run began from a wider starting position and ended with a flatter and more powerful finish to beat Jan Laštůvka, but we had the same broad concept of escaping a desperate challenge before cutting in from the left and hitting a shot which you felt was going in from the moment it left his boot.

But Fulham have been particularly unlucky against Manchester United. To concede one goal like Martial’s is unfortunate, to concede two is careless, but to have it happen to you three times makes you appreciate the depth of attacking talent United have had over the years.

Before Martial, and even before Ronaldo, we had Ruud van Nistelrooy score a solo goal with more than a little similarity to United’s second at the weekend.

Again, it was the end result of a one-man move beginning on the halfway line. Again, it saw one United striker escape challenge after challenge without looking around for support because he was confident he wouldn’t need it even if it was forthcoming.

And again it ended with a shot from the left-hand side of the area for which the goalkeeper was effectively a statue, but one where even the best keeper in the world would have been made to look ordinary.

Van Nistelrooy was not known for this kind of goal – much of his work in a United shirt both ended and began inside the box – so was this an example of the Dutchman scoring an Anthony Martial-style goal before anyone knew who Martial even was?

It’s hard to point to a single player who hasn’t drawn comparisons with other greats at the start of his career – even Lionel Messi was being called “the new Maradona” before we started hearing players described as “the new Messi” – but the challenge comes in carving out a reputation for oneself which goes beyond likenesses to what has come before.

Even the best musicians and artists had someone inspiring their work when they started out, but we still talk of them as their own person rather than a mere follower of their idols based on the way they built on those influences to become the sum of those parts and more.

At 23 years of age, Anthony Martial is approaching the point in his career where, if he wants to be seen as a great rather than just part of a great team, he needs to show depths to his game and produce moments which, while evoking the work of others, can be seen as carrying his own essence.

There’s still a bit of work to be done, but it feels like he’s well on the way.