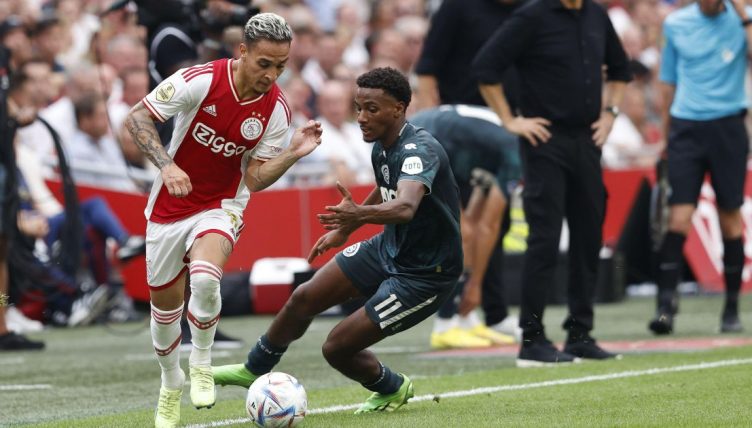 The language of Brazilian football is rich and poetic. Ajax winger and Manchester United target Antony is fluent in its every nuance and dialect.

There are dozens of skill moves and dribbles that the Brazilians have perfected and taken to the world, and each has its own name. Or in some instances several names depending on where you are in the country.

One of the most intriguing is the drible da vaca – the cow dribble – which involves playing the ball around one side of the opponent and running around the other.

Why the cow dribble? In Brazilian football’s very early years, the game was often played on a bit of spare agricultural land with all the hazards that brought; hazards including roaming cows. Confronted with one, the best option was to knock it to one side and run around the other.

It was on those fields that Brazil legend and double World Cup-winner and vein-twisting dribbler Garrincha grew up and it was there that the boy with the bowed legs mastered the art of the cow dribble before unleashing it on the world to such devastating effect.

Times have moved on. Most modern Brazilian footballers of note come not from the rural field but from the tight alleys of the nation’s urban sprawl. Yet still, there are obstacles, and still, they need to be averted.

So even on the concrete streets, the cow dribble lives, kept alive by modern masters of the feint and twist and sleight of foot like Antony, a natural heir to the dribbler’s throne upon which Garrincha once sat.

On Sunday afternoon, as Ajax ripped Groningen apart at Amsterdam’s Johan Cruyff Arena, Antony was giving chapter and verse on the jogo bonito and just how it should be played.

Within 75 seconds, he’d annihilated his first victim, standing up Groningen’s Isak Dybvik Maatta to knock him down with a petrifying flip-flap nutmeg.

By the time Antony emerged with the ball on the other side, less than 90 seconds of the 90 minutes had passed, but the game was already over and Groningen players knew it.

Yet Antony was determined to twist the knife. Ten minutes later, he did so in style.

Having seen Dybvik Maatta and Laros Duarte double up on the Brazilian and still fail to stop him, Groningen players now tripled their efforts to mark him out of the game.

The answer to such unexpected and seemingly insurmountable obstacles? The cow dribble, obviously.

First Antony cut inside Duarte and was then confronted with Dbvik Maatta and his mate Tomas Suslov. They may well not have bothered.

Antony dragged his studs over the ball, flicked it back the other way with the outside of his boot, and then, like greased lightning, pulled it back in the other direction, around the back of Dybvik Maatta. Naturally, Antony ran the other way around his marker to collect it.

While the shot came to nothing there was no coming back from that degree of humiliation.

These were relatively highly paid professional footballers, not a small herd of dairy cattle, but the cow dribble had been applied to the same effect.

By this point, confidence was dripping from Antony like fritessaus from a Dutchman’s chips.

A few minutes later, he curled a sighter onto the roof of the Groningen net. Then with just under half an hour gone, he turned that goal threat into something more tangible.

He cut inside the forlorn figure of Dybvik Maatta and whipped a shot with venom and bend into the far top corner.

Before half time it was three, a delicious cross from Antony setting it up.

After the interval, Ajax made it four, five, and then six.

While Antony wasn’t directly involved in any of those, it was the 22-year-old Brazilian who had broken Groningen players’ spirits, allowing his team-mates an easy ride in the second period.

After the game, Antony was asked about the interest from Manchester United, who have been linked with a move but are reportedly unwilling to pay the £70million Ajax would like in exchange for his services.

“Will [Erik] Ten Hag call me? No idea,” he told NOS (via Metro). “He has to discuss this with my agents, I’m focused on here. What will come will come, we will see.”

We will see indeed.

But after the brain-bogglingly bad display Manchester United produced on Saturday and the performance Antony put in on Sunday, Ten Hag and the United hierarchy may well be thinking that £70million looks like a bargain.