Meet Antony, the p*ss-taking footballer of your dreams – as PSV found out 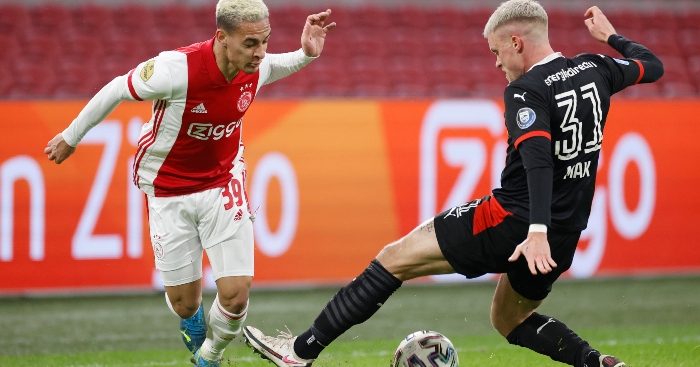 Every January, 120 of the country’s best Under-20 sides descend on the state of Sao Paulo – along with hordes of scouts from across the world – for the Copa Sao Paulo de Futebol Junior.

Unfortunately, the 2021 edition has been cancelled owing to the pandemic, but in any normal year, it would already be well underway.

The competition, affectionately known as the Copinha, or ‘little cup’, is broadcast live on Brazilian terrestrial television during the off season, so is watched by millions. And it has served as a launchpad for Robinho, Neymar, Marquinhos, Kaka, Gabriel Jesus and countless others.

In 2019, it was the turn of Antony, a lightning quick winger then so scrawny he looked as if he was running around on a playground in a kit handed down from an older brother.

Playing for Sao Paulo, the team he supports, Antony progressed through the group stage and seemed to grow in stature as games passed, scoring one in the round of 16 and three more in the semi-final.

By the time the final came, he was being talked up as the player to watch – and for those of us lucky enough to be in attendance, he did not disappoint.

The final of the Copinha is always a wonderful event, with 35,000 people packing into Sao Paulo’s Art Deco Pacaembu stadium on January 25, the anniversary of the foundation of the city.

Being a bank holiday, the pre-match mood is always jubilant – and lager-fuelled – and being the middle of summer, the weather is normally set fair.

For the first half of the 2019 event, it was, if not blazing sunshine, at least warm and dry.

Antony made the most of the good weather and perfect pitch to leave his mark. Just before the break he cut inside his defender and curled a perfect cross onto the head of centre-forward Gabriel Novaes for the opening goal.

At half-time, though, the heavens opened; not just a shower but a full-on tropical downpour. Some fans ran to find what little cover there is in a stadium without a roof, others made for the exits. Antony was undeterred.

Seven minutes into the second half, he motored onto a Paulinho through ball, turned his marker inside out and slotted beneath the ‘keeper and into the net.

Vasco went on to level the scores, but Sao Paulo eventually sealed the silverware from the penalty spot and the tournament’s best player, who had proved he had the substance to go with his abundant style, had his just reward.

Antony went on to make his senior debut shortly after and became a mainstay of the first team before being sold to Ajax – with whom Sao Paulo have an ongoing relationship, having sold David Neres to the Dutch giants in 2017 – in February 2020 for an initial fee of €16million.

Now, having been in Holland for almost a year, Antony is starting to show all of his natural trickery, swagger and decisiveness.

Before the weekend, the 20-year-old Brazilian had six goals and seven assists in 13 games, working out as a goal contribution every 62 minutes.

In mid-December, he managed two assists and a goal in a single game against PEC Zwolle and followed that up with two assists against ADO Den Haag the next weekend.

One of the assists in each game was almost identical, a cut in from the right onto his left foot, followed by a bending cross that Klaas-Jan Huntelaar nodded in. Though Sebastien Haller fared badly at West Ham, it is the sort of service he will thrive off.

On Saturday, Antony continued that fine form with a smart finish against PSV Eindhoven, helping Ajax back from 2-0 down to a 2-2 draw.

But the real moment of joy he provided was not in front of goal but near the touchline five minutes after his equaliser.

Hemmed in by two PSV players, Antony scooped the ball up and over Philipp Max’s head, running around the German defender to collect it on the other side – a move that is known as a chapeu, or ‘hat’, in his homeland – before laying it off to a team-mate.

It was showmanship of the first degree, but it was also highly effective and, at the time, one of the few options available to him to wriggle his way out of a tight situation.

That, perhaps, sums up the magic of Antony.

He is capable of skills and flicks and his YouTube compilations are doubtless full of them. But he is also highly efficient when in form. Even if he remains very one-footed, his finishing is smart and his crossing pinpoint.

In a recent interview with Yellow and Green Football, he revealed how hard his upbringing was. He lived on a corner where gangs sold drugs and, he said: “I suffered when police invaded my home to see if there was anything there.”

More recently, his struggles with the responsibility of becoming a father for the first time aged just 19 were well publicised in the Brazilian media.

Yet he is clearly tougher than that wiry frame suggests, for he has come through and is thriving at the top.

Ajax sit first in the Eredivisie and in February they face Lille in the last-32 of the Europa League. They are favourites for the domestic title and with their young Brazilian in his current destructive form, they surely stand some chance in Europe.

Following the completion of the club season, Antony will – pandemic permitting – be aiming to take an Olympic gold medal with the Selecao’s Under-23 team, and from there, the sky is the limit.

If he moves on from Ajax for serious money in the next couple of years, do not be surprised.