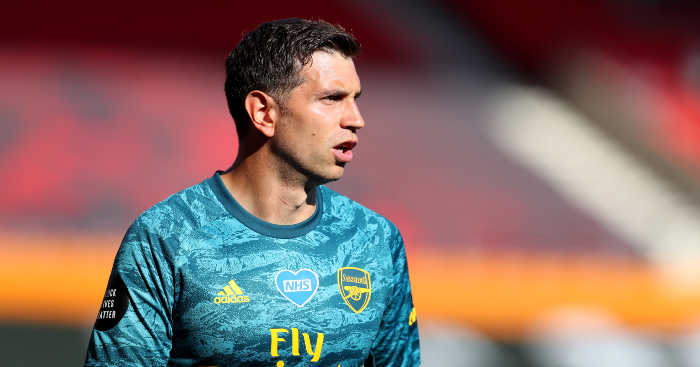 Rondo, schmondo. This Arsenal team would do well to hoof it long to Pierre-Emerick Aubameyang whenever possible.

We can all agree that Bernd Leno getting crunched by Neil Maupay was a bad thing.

The Brighton striker didn’t need to jump into Leno, and the poor keeper — one of Arsenal’s best players this year — now looks set to miss a month of football.

The injury has been one of several disappointments for Arsenal since Project Restart began.

David Luiz remains David Luiz, Mesut Ozil seems to be persona non grata once again, and, maybe worst of all, nobody at the club looks particularly arsed about anything.

Given all that, the Gunners should take silver linings where they can find them.

Whether it’s the continued good form of youngsters like Bukayo Sako and Eddie Nketiah, or the fact that players can wear the bruised banana kit for a few more weeks, it’s not all doom and gloom.

In fact, the 2-0 win against Southampton had its fair share of silver linings.

Luck, it would seem, was on Arsenal’s side: Alex McCarthy did his own little David Luiz tribute for Nketiah’s opener; then later on, less embarrassingly but of equal consequence, he fumbled a shot for the second.

But maybe the biggest positive from the game was how threatening Arsenal looked as a Route One side.

The north Londoners, whose strengths and weakness have remained virtually unchanged since Arsene Wenger left the club, haven’t been known for their directness.

And yet, with reserve goalie Emiliano Martinez showing he’s actually a star quarterback, Arsenal might have unlocked the deadliest weapon in their… um… arsenal.

We don’t know exactly what Mikel Arteta tells his players before a match.

Personally, I don’t even know what he tells his players during a match, because my sports network of choice won’t let me mute the artificial crowd noise. (“Come on, protect the gaps!” is all I could discern yesterday.)

If we had to guess, though, we’d say the manager isn’t telling his goalkeeper to play a lot of long balls.

But should it be?

Around eight minutes into the second half at St Mary’s, keeper Martinez caught an overhit cross from Southampton’s Pierre-Emile Hojbjerg.

The 27-year-old Argentine looked for the quick short option.

I mean, he really looked for it. I’ve timed it, and he actually held onto the ball for eight whole seconds.

The option wasn’t there, so instead he did something quite un-Arsenal: he played one of the most delicious drop kicks you’re likely to see.

Pierre-Emerick Aubameyang — arguably the best Pierre-Em-something on the pitch — was holding his run out on the left, and when he saw Martinez winding up the pass, he sped off.

Martinez launched the ball with one of those incredibly aesthetic swerving kicks. You know, the kind where the goalie leans to a fully diagonal angle and almost slices the ball upward with the outside of the foot.

The ball dropped deep into Southampton’s half… and right onto Aubameyang’s left foot.

And the forward’s touch was good enough to eat.

As Aubameyang killed the ball dead, it looked like Arsenal were putting together the best Route One goal ever scored.

But then he slightly fudged his low cross.

A split second later, it looked like we would at least be getting our second comedy goal of the day, with Southampton’s Jan Bednarek diverting the cross towards his own net.

Sadly, that didn’t happen either.

And in any case, VAR would surely have intervened to punish Martinez for holding onto the ball two whole seconds too long. (I’m joking, but… would it have??? Please get in touch if you know.)

Still, the thrilling move did at least show what Arsenal would be capable of if they occasionally played a bit more Allardyce and a bit less Arteta.

As if to drill this idea into their heads, the next big opportunity came from another long-ish pass towards the Southampton box.

Only this time it was a shonky back-pass from Hojbjerg, playing in his namesake Aubameyang and getting Jack Stephens sent off for a last-man foul.

Arsenal scored from the resulting free-kick.

Weirdly, you have to wonder whether this was Wenger’s grand plan all along.

When Le Professeur almost signed Jamie Vardy for £20million back in 2016, many people doubted how the tactics would work.

Vardy was a star for Ranieri’s glorious but direct Leicester, while Arsenal had their own very different philosophy. A bad one.

The Gunners ultimately got Lucas Perez for £17million, then had to wait another 18 months before getting the Vardy-adjacent Aubameyang for £56million.

Has Route One Arsenal finally arrived? Better late than never.