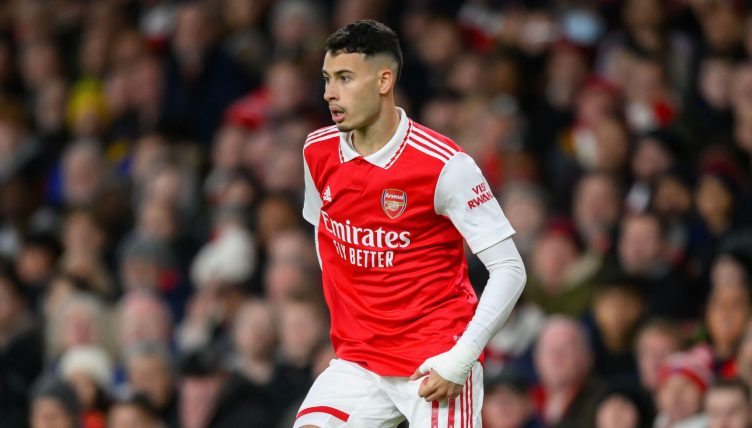 Never mind the goals or general competence, it took one piece of piss-taking skill to illustrate the difference between Arsenal and Tottenham at the start of 2023.

The atmosphere at the Tottenham Hotspur Stadium before kick-off was feverish; Spurs fans hummed with anticipation of another full-bloodied derby, while Arsenal were motivated by the prospect of opening an eight-point gap at the Premier League summit.

In the event, things were a lot more routine. Arsenal eased into a two-goal lead, and should have scored more during an embarrassingly one-sided first half, before just about holding Spurs at arm’s length after the break.

Off the pitch, Antonio Conte went through his usual touchline repertoire, but his eyes told the story of a man that’s already in Paris or Turin. Across No Man’s Land, Mikel Arteta ducked and dived in the manner that whips Richard Keys into an impotent frenzy.

But it was Gabriel Martinelli that highlighted the growing chasm between the two great rivals. Martinelli was a regular menace on the left flank – some viewers claimed to witness Cristian Romero giving birth to kittens at one point – while the vaunted Son Heung-min was once more ineffectual.

And, with all the fearlessness of youth, the 21-year-old managed to deflate the Spurs crowd just as their side were applying some belated pressure.

As the ball bounced towards him on the far touchline, Martinelli bought out that dawg in him by turning around and allowing it to bounce off his back. On the touchline, humility’s Richarlison seethed at such show-boating.

Granted, no Spurs defender could be found between Harringay and Walthamstow as the ball arched its way towards Martinelli. But, as a way of demonstrating which of the north London sides is going places, the youngster’s piece of impudence was hard to beat.

Hahaha, so cheeky from Martinelli pic.twitter.com/VatP892U7F

While Arsenal fans were seething on Saturday night at being gazumped for the signing of Mykhailo Mudryk by Chelsea, Martinelli’s continued excellence is the perfect consolation.

Despite not registering a goal contribution against Spurs, his seven goals and two assists already represent a career-best for the budding young starlet.

This supports the impression of a player developing at breathtaking speed; Martinelli has packed on muscle since his arrival at the club as a teenager in 2019 and he now speaks excellent English.

It’s little wonder that Arsenal are trying to tie him down to a new, more lucrative contract; they know exactly how important Martinelli has become to the club’s future. Talks are ongoing, and the player himself has publicly declared that he wants to stay.

As Arsenal fans drifted into the night dreaming of a first league title since 2004, which is becoming an increasingly real prospect, we don’t expect it to be long before they turn Martinelli’s piss-taking into a witty terrace anthem.

For, more than any other event at the Tottenham Hotspur Stadium yesterday, it illustrated both Martinelli’s blossoming into a top performer that’s comfortable in his own skin and the equally startling transformation of Arsenal into an unquestionably elite side.

TRY A QUIZ: Can you name every player to score one PL goal for Arsenal?