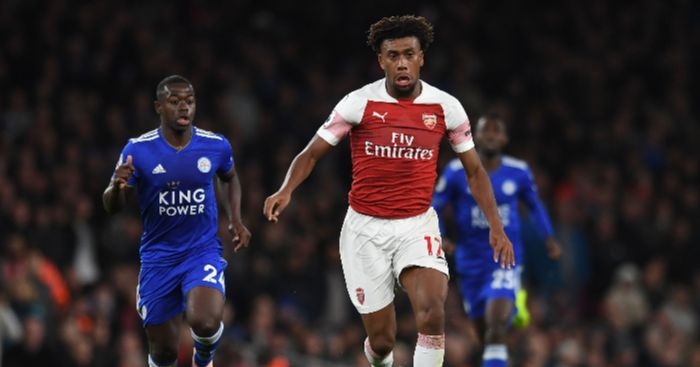 There is often a moment in a game in which a team knows for sure it is beaten. Leicester City experienced one of those against Arsenal after just 35 minutes on Monday night. They were winning 1-0 at the time.

Leicester had dominated the opening half an hour at Emirates Stadium and had already forced a sensational save from Bernd Leno by the time they took the lead through Hector Bellerin’s own goal, yet it only took another five minutes for them to realise it wasn’t going to be their night.

Claude Puel may have already thought it when his side were denied a penalty after Rob Holding handled inside the box, but it wasn’t until the 36th minute that the Foxes players realised their fate was already sealed.

They would not actually concede an equaliser until moments before half-time and did not fall behind until past the hour mark, but make no mistake about it, Alex Iwobi let them know they were beaten long before that.

Still on a high from the goal and pressing hard to keep Arsenal penned in, Leicester may very well have spotted an opportunity to break on their hosts again when Stephan Lichtsteiner casually lofted a ball out from the back towards Iwobi on the left flank.

Nampalys Mendy certainly seemed to back himself to get his head on the ball before it even got to Iwobi, using all of his body weight to stop the Arsenal man from getting off the ground. Ricardo Pereira was there too, ready to pounce once Mendy got his bonce on it.

But Iwobi wasn’t even thinking about a header. That would have been an acknowledgement that Leicester were on top, that all Arsenal could do at this stage was clear their lines. And Iwobi wasn’t having that.

Instead, he did this.

It was the clearest possible message he could have sent to Leicester that Arsenal were going to win that game. And a clear message that they were going to do it in style.

The visitors might as well have walked off the field there and then because there was literally nothing they could have done to prevent the three goals that were to follow.

First of all, Iwobi was stronger. Despite Mendy’s efforts to impede him, he still climbed way higher and could easily have headed the ball on if he’d wanted to. That was him letting Leicester know they couldn’t be bullied.

And then there was the control. We’d like to think there was a traditional Sunday League shout of ‘how’s your touch?’, but even if there wasn’t, Iwobi bringing it down like that was him letting Leicester know he was better than them. He was quite literally in control.

But Leicester still hadn’t realised it at this point. Mendy and Pereira both gave chase, and actually, Pereira caught him up. Maybe he even thought he could win the ball back.

Iwobi, of course, knew he couldn’t. And he could easily have passed to Mesut Ozil to immediately render Pereira’s effort meaningless. In fact, such is his strength, he probably could have kept going down the flank, too.

But that wasn’t enough. For some reason, as he ran down that flank having already produced that touch, Iwobi decided he needed to dish out some more punishment. So no, he wouldn’t lay it off or risk losing it by continuing his run. He’d turn back towards Mendy instead.

It presented the Frenchman with a chance of immediate redemption. And there was a split second when Iwobi took what could have been perceived as an unnecessary touch that he looked prime for a reducer. As Mendy raced in, a big challenge was surely coming.

Again, no. He raced in, sure, but Mendy’s only reward was to have his humiliation completed.

In all honesty, he should have known what to expect. Better players than Mendy have been helpless to prevent an Iwobi nutmeg, and an angry opponent rushing in seeking immediate revenge presented the easiest of pickings for the Premier League’s Nutmeg Prince.

And so it proved. As he felt the ball pass between his legs, Mendy knew for sure he was playing for the losing team that night. Everything that followed was already predetermined. That third goal, one of the great Premier League team goals, was inevitable.

Arsenal’s first and second goals were special enough, but with Leicester’s spirit crushed by now, that third was a message to the rest of the Premier League.

This wasn’t just any old Arsenal team goal, this was incisive pass followed by incisive pass, interspersed with flicks, dummies and telepathic moment. This was a team winning for the 10th time in a row, a team that seems to be getting better with each passing game.

But most of all, this was a team that knew they’d won when they were still 1-0 down.