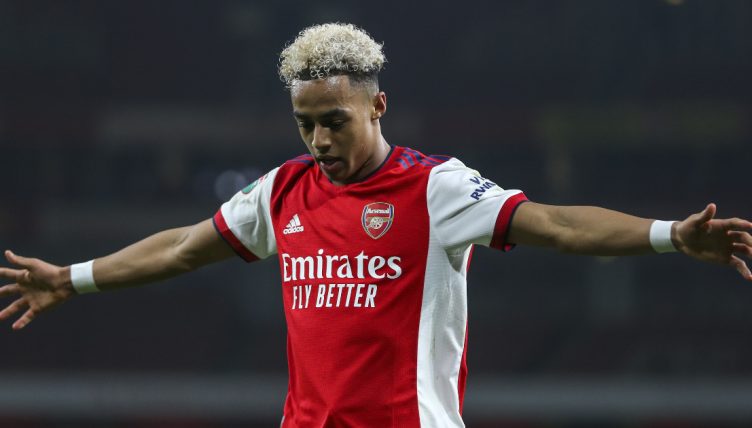 Bukayo Saka. Emile Smith Rowe. Ainsley Maitland-Niles. Charlie Patino. Arsenal’s Hale End academy has been churning out the talent, and Omari Hutchinson looks set to be the next youngster to make a name for himself at senior level.

The 18-year-old attacking midfielder has been in sensational form in the Premier League 2 this season, scoring four goals and assisting five times in just eight starts.

Impressive numbers, but these only tell part of the story when it comes to Hutchinson.

It is rare for a player to develop their own signature trait before they’ve even made their first-team debut, but when you watch Hutchinson, you notice it almost instantly.

There is a buzz every time he picks up the ball, a buzz which not even the other insanely talented Arsenal youngsters produce to the same level.

Hutchinson’s quick feet and stunning technique are reminiscent of some of the great entertainers we’ve seen over the years: Nani, Hatem Ben Arfa, Franck Ribery.

This isn’t just skill for the sake of skill though. Hutchinson may produce a move which Neymar would be lauded for, but he does it for the benefit of the team.

More often than not, his outrageous dribbles and stepovers will help him beat a man, or his outside-of-the-boot passes will find a teammate in space.

His ridiculous technical ability was on full display from the moment he made his Premier League 2 debut in August 2021, away at West Ham.

Picking up the ball in his own box, he went on what looked to be one of his signature dribbles, before playing a pinpoint pass… with the outside of his boot, just like one of Ricardo Quaresma’s signature trivelas.

The ball found his teammate Mika Biereth upfront despite Biereth being closely marked by two defenders and is a great example of the ingenuity Hutchinson often shows with his creative talent.

His bank of skills, coupled with lightning pace and fair upper body strength at this stage of his career draws comparisons with Saka, whose intelligence, strength and technique has seen him rise to become Arsenal’s talisman at the age of 20.

Hutchinson’s signature goal – cutting in from the left, dribbling with too much flair for any youth defender to handle, before firing in his shot to the opposite corner – has attracted the attention of Mikel Arteta and Arsenal senior staff, and he was rewarded with a place on the bench for a number of senior games during the January injury crisis.

He and his team-mates are aiming to follow in the footsteps of the likes of Smith Rowe in the group above him.

“There are players like me, Zane[Monlouis], Charlie [Patino], Brooke [Norton-Cuffy], Marcelo [Flores] and Jack [Henry-Francis], we’ve been together since Under-12s and 13s,” the youngster stated in September.

“It’s just like the group with Emile, Saka and Joe Willock. If everyone keeps working hard, some of us should hopefully one day get some first-team experience.”

The young star has already endeared himself to the Arsenal fanbase, with a filthy chop leading to a stunning goal against Tottenham Hotspur Under-18s a year ago alerting everyone to the extent of his ridiculous ball control.

Omari Hutchinson balling against Spurs u18s yesterday. He also got an assist in the 4-1 win.pic.twitter.com/PCENw1LzYT

The Spurs defenders could only watch on in horror as Hutchinson found the net after humiliating two defenders on the way.

When youngsters move up age groups, they often keep things simple whilst finding their feet. From the moment Hutchinson progressed to the highest youth team, he continued doing what he does best: entertaining.

Yes, Hutchinson scores goals, but he scores them in style and with sheer confidence.

If he continues the way he’s going, then Arsenal will have another young star to give Saka a run for his money.