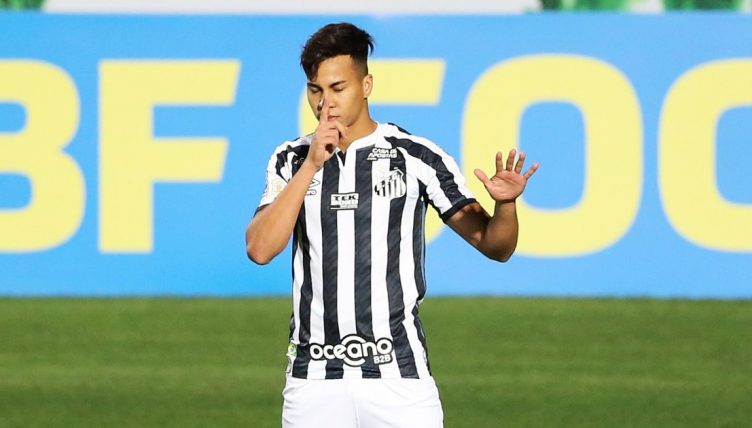 If reports in various publications across Europe are correct, then Kaio Jorge will soon become the latest in a long line of Brazilian wonderkids to jet across the Atlantic and join one of Europe’s elite clubs.

He has been hyped as the next Ronaldo. He has, as the most recent star to emerge from the endless talent factory that is Santos Futebol Clube, been compared to Neymar and Pele. Former Napoli and AC Milan defender Andre Cruz says Kaio “reminds me a little bit of [Andriy] Shevchenko”.

But if his latest goal is anything to go by, the 19-year-old Brazilian might sooner be getting his hands on a Golden Globe rather than the Ballon d’Or.

Santos were 2-1 up in their second league game of the season against Ceara at their famous old Vila Belmiro stadium on Saturday night. Yet rather than sit on their lead, they were after a third. It is not in the club’s DNA, nor that of their manager Fernando Diniz, to sit back and defend.

With 20 minutes to go, they won a corner and Jorge, their main attacking threat, was being closely marshalled by a defender. He noticed that he was not about to get a free run at goal, so knelt down and tied his shoelace. Or at least that was what it appeared he was doing.

The acting was clearly convincing. Kaio’s marker lost concentration, wandered off to deal with more apparent threats in the six-yard box, and the young centre-forward was left alone on the edge of the area, still bent over fiddling around with his right boot.

His team-mate and fellow 19-year-old Gabriel Pirani was wise to Kaio’s tricks and sent the ball curling into the space that the Santos No.9 would have been expected to occupy, were he standing upright.

Kaio sprang to his feet, darted into the gap, headed it low and hard and, via a deflection off a Ceara defender, the ball was in the net. Santos’ first three points of the season were in the bag thanks to their latest supremely talented academy graduate.

It was not a goal to win a Puskas award. But a Best Supporting Actor nomination? It’s worth a shout.

“You’ve got to be street smart in football,” Kaio said after the game. “I saw that I was being marked and the way of trying to trick my opponent was tying my laces. I did what I could to score the goal, to be as free as possible. Pirani put the ball in and I managed to score.”

To those clubs shooting admiring glances Kaio’s way from the other side of the pond, that sort of goal will only add to the list of reasons to bring him across.

The Santos youngster has shown already that there is good variety to his game. In the Copa Libertadores last year, he was the club’s top scorer as Santos finished runners-up. He can also drop deep and link up with his team-mates in midfield, as he did when he set up his side’s first against Ceara on Saturday.

Add a bit of clever chicanery into the mix and you’ve got yourself a promising player, even if those comparisons with Neymar, Pele and Ronaldo still look extremely premature.

Arsenal have been linked – and heaven knows they could use a player who is ready to employ a few underhand tactics to find the back of the net. But reports suggest they’ll have to fight off interest from Juventus, Bayer Leverkusen, Napoli, Lazio and Atletico Madrid.

Whoever ends up bringing Jorge to a top five league though, defenders have been warned. If you see him tying his laces, however convincing the acting, don’t be fooled.