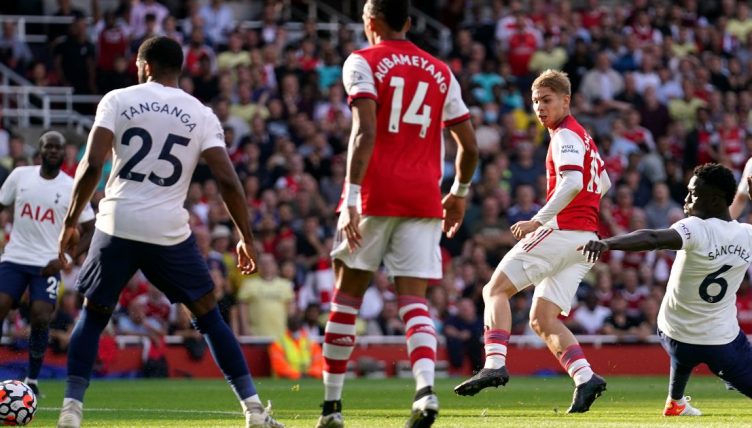 “It was probably the best day of my life,” a beaming Emile Smith Rowe told Match of the Day’s pitchside reporter shortly after the final whistle had blown on the North London Derby. He wasn’t exaggerating.

He is young, too young to have experienced those days that you are forever obliged to cite as the best of your life once you have passed them: marriage, the birth of children, the marriage of said children. And he had just come from a victory that had combined all the magical ingredients of a footballing fairy story.

Most of all, though, the individual performance of academy graduate turned first-team protagonist. And what a performance it was. A goal, an assist. More than that – utter domination that he was the main instrument in sculpting.

Arsenal surged forwards like red tidal wave throughout the first half, and Spurs’ defence crumbled like a white chalk cliff.

Smith Rowe had been at the centre of it right from the start, metaphorically, but literally too. His position on the left of the front four was nominal. When Arsenal had the ball, he drifted gracefully and menacingly inside, freeing the flank for a marauding Kieran Tierney.

That was where Arsenal’s first real chance came from. Granit Xhaka played it to Smith Rowe, who turned and drove and played it to Tierney. The Scot’s cross found Pierre-Emerick Aubamyeang and his shot forced Hugo Lloris into a save.

Then came the goal from Smith Rowe’s toe. This time the attack was down the other wing – Martin Odegaard to Bukayo Saka, a low cross and, flighting across undetected from that inside left position, there was Smith Rowe to fire beyond Lloris. Same move, just on the other side of the pitch and, from the Arsenal perspective, with a better outcome this time.

Yet that was not the apex Smith Rowe’s afternoon. Goals are great, of course, but at heart, Arsenal’s newest No.10 is a creator and it is success in that part of his game that will give him the most pleasure.

In that respect, he is much like his predecessors in the shirt. Jack Wilshere, Mesut Ozil, err… William Gallas. Well yeah, maybe not the last one, but you get the point.

On punditry duty for the game on Sky Sports, though, Tony Adams reached for the nuclear option when it came to his pre-match comparison of Smith Rowe with Arsenal’s No.10 of a bygone era. It was a comparison that even he showed some discomfort in making.

“I think technically, Emile,” Adams said, before pausing to consider the words that would follow, “I used to play with Dennis Bergkamp, he does so much one touch play.”

“Are you really making that comparison?” responded presenter David Jones, as surprised as he was delighted that the soundbite had come on his watch.

Adams rowed back a little (no pun intended): “Listen, the guy [Bergkamp] has got a statue out there so I don’t want to put him up alongside Dennis.” But he repeated the thrust of the point: “[Smith Rowe’s] football intelligence, he gets it and he’s seen it before it’s coming to him. One touch, he plays incredible.”

And, with the assist that followed his goal, Arsenal’s young creator proved Adams’ equivalence well placed, even if he had dressed with a caveat.

Smith Rowe drifted inside again and received it from Xhaka again. What followed? A round-the-corner, left-footed pass to Tierney. First time, like Bergkamp would have? You bet.

Then the 21-year-old burst forwards, getting the ball back after another one-touch pass from Pierre-Emerick Aubameyang. Smith Rowe’s first touch sent him flying forwards.

The second kept the ball shielded from Davinson Sanchez. The third returned it to Aubameyang, signed and sealed, ready to be delivered to its final address in the bottom corner of the Spurs net. Perfect, economical simplicity.

And, if Smith Rowe’s assist was an oblique ode to Bergkamp, then Aubamyeang’s knee-slide celebration was a more explicit nod to the Dutch genius’ one-time strike partner Thierry Henry, who was sat in the stands, looking the epitome of Gallic cool in his cap, sunglasses and JVC-stamped retro Gunners shirt.

Constantly harking back to more glorious eras is not always a particularly healthy way to build towards a brighter future, and the current creator-scorer duo is still little more than a tribute act to that great pairing of the early part of this century.

But if Smith Rowe and Aubameyang can channel some of the Bergkamp-Henry chemistry, then it will stand Arsenal in good stead for the rest of the season. Even a tribute to the irresistible, attention-grabbing artistry of the Bergkamp-Henry side is a better watch that a lot of the middle-of-the-road bands Arsenal have put together since.