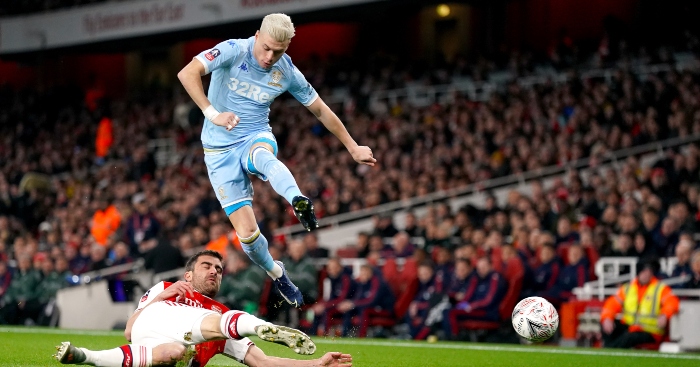 Arsenal were made to work hard for their FA Cup win over Leeds United, and one of their players had a tougher task than most.

Sokratis Papasthatopoulos was the latest to take on the Arsenal right-back role which feels less like football and more like performance art this season. After seeing Shkodran Mustafi play there under Unai Emery with mixed results, the presence of the Greece international on the right was likely met with a few cries of, ‘How bad can it be?’

The answer to that question is, well, we still don’t really know. Sokratis looked shot earlier in the game, yet produced a moment towards the end which had all the home fans on their feet.

After 85 minutes of hard running and, yes, breathlessness, he might have been forgiven for taking it easy late on and steeling himself for another Leeds onslaught.

Instead, the former Borussia Dortmund man attempted to take matters into his own hands, quite literally.

Taking possession from a quick free-kick, he carried the ball to the corner flag where he was met with, let’s say resistance. No bother.

Commentators will often lie about these moments as things “no one likes to see”, a suggestion immediately rubbished simply by looking at the standing ovation provided by Arsenal fans when the whistle blew with Sokratis taking on all comers by the corner flag.

As Barry Douglas and Jack Harrison approach in an effort to win the ball back, his response is far removed from anything you’d anticipate from one of Arsenal’s other right-sided options.

There’s no skill, no attempt to beat the Leeds players and no pretence that this was ever the intention. This is a man who came to fight, and fight is what he will do.

Sokratis shields the ball with the grace and guile of a horse attempting to escape its stable, thrashing with wild control in an effort to shrug off the humans attempting to shackle him. And, remarkably, it works.

In sending him to shield the ball in the corner, rather than one of the attacking players, Arsenal have looked at a Leeds duo prepared to put together flat-pack furniture and asked them to haul away a fridge.

NFL analogy if I may :

Arsenal are still in a transitional moment, with this season unlikely to end on too positive a note in the league. With that in mind, now is the time for value to be placed in things which send the right message as much as those which provide a couple of ultimately meaningless results.

No one is kidding themselves that a 1-0 win over a (let’s face it) superior Leeds team counts as progress, but it’s still a step forward for some Arsenal fans to care about the result rather than reacting with a relaxed apathy.

Sokratis’ corner flag antics might not represent what the fans expected this season, but they do at the least represent a clear direction and a man doing exactly what he set out to do. After all that has gone before during the 2019-20 season, even that feels like a step forward.