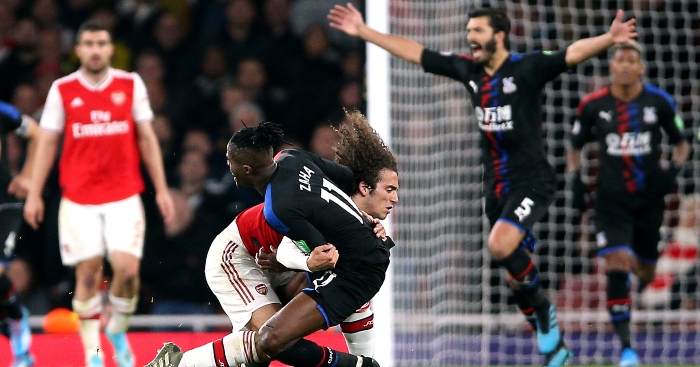 Matteo Guendouzi has been given a lot of responsibility for someone so young, but the Frenchman has repeatedly shown he can be trusted.

Much of the talk after Arsenal‘s draw with Crystal Palace will surround the visitors’ comeback or the late disallowed goal which might have handed the Gunners all three points.

There was also the not-too-small matter of Granit Xhaka’s exit, the Swiss international leaving the pitch in a manner which hardly screamed ‘leadership’, and for this reason the willingness of Guendouzi to take one for the team becomes even more notable.

One of the major criticisms of Arsenal in recent years has concerned how welcoming they have been to opponents, losing the knack of using the dark arts to see out a game.

The Gunners drew three and lost four from winning positions in Arsène Wenger’s final season in charge, while the 13 points lost after taking the lead last season – compared to nine for Chelsea – was arguably the difference between Champions League and Europa League football.

Yes, Unai Emery’s team went from three points down to one against Palace, but it could have been even worse without their young Frenchman taking matters into his own hands.

With the five allotted minutes of stoppage time up, and with Wilfried Zaha breaking clear from deep, Guendouzi knew what he needed to do.

Shithousery is a hugely underrated aspect of elite Premier League football. It’s something Manchester United have lacked since Ander Herrera’s summer departure, contributing to their underwhelming start to the season, and it’s something United’s current manager displayed wonderfully during his own playing days.

All the best sides around have known how to master the dark arts, with the likes of Mark van Bommel and Thiago Motta ensuring longevity in title-winning squads by virtue of having this string to their bow, while Manchester City’s new recruit Rodri has already shown us his knack for a well-timed tactical foul.

These players, however, have spent years perfecting the art to avoid the maximum punishment. They will know exactly what they’re doing, as will players on both sides, but they’ll leave enough of a grey area to ensure the referee is often convinced not to issue the harshest possible punishment,

The foul on Zaha will suggest to some that Guendouzi is not quite at this stage yet, but perhaps it shows he has gone past this point and out the other side, refusing to hide any aspect of either his intentions or execution. While others will spend weeks memorising blueprints and figuring out exactly how many seconds they have to shut down the alarm system, he just bulldozes his way through the front door.

Guendouzi just stopped a Zaha counter from an Arsenal corner with genuinely the most cynical foul you will ever see. Probably too high to even be considered a rugby tackle, although ultimately not even rugby fans know the rules of their sport, so who knows

Of course, you wouldn’t pick a player just for fouls – at least we don’t think you would – and the same game saw Guendouzi remind fans what he is about at the other end of the pitch too.

Inside the first 15 minutes, with Arsenal already two goals to the good, the former Lorient man pinged a phenomenal ball from deep inside his own half, setting Pierre-Emerick Aubameyang clear on goal.

Indeed, with a better first touch from the striker, it could easily have been game over. The comeback, the late drama and the Xhaka headlines might not exist. Arsenal might be two points behind fourth-place Chelsea rather than four adrift.

Guendouzi played 58 passes against Palace, more than any other player on either team, while his pass completion rate of 86.2% was higher than every Arsenal player other than David Luiz and Sokratis. And yet, at the point where he should have been at his most exhausted, he still found the energy to get where he needed to be.

The challenge was not to get to a position where he could execute a clean tackle on Zaha; he just needed to get near enough to stop him. He didn’t even need to avoid making it look obvious.

Arsenal fans won’t have left the Emirates Stadium feeling like they had much to cheer about on Sunday evening. A two-goal lead had been squandered for a second time this season, and the Champions League places were beginning to feel as distant as ever.

However, in Matteo Guendouzi, they at least have one bright spark. He might still be 20 years old, but he’s already looking like someone who won’t be out of place in any team.

It feels wrong to point senior players in the direction of a kid and tell them to be more like him, but rules were made to by broken.