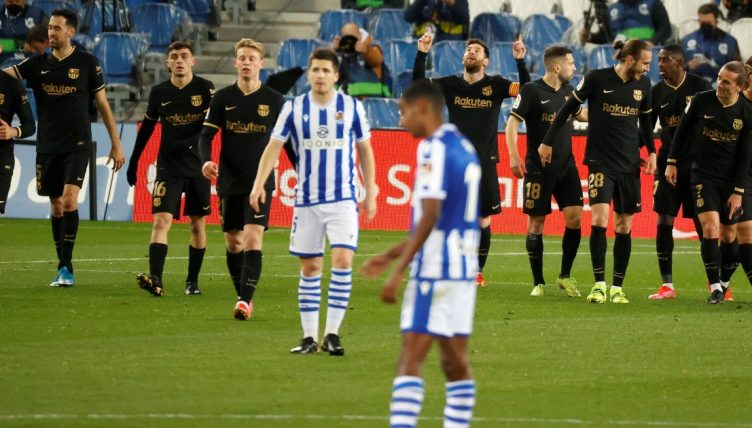 There were special moments throughout Barcelona‘s 6-1 annihilation of Real Sociedad, but none gave you the sensation they’re back quite like Lionel Messi‘s second, the icing on the cake in the 88th minute.

It’s been a long time since watching Barcelona felt like a treat, almost with a guarantee that you were in for wonderful entertainment.

Their various highs – Ronaldinho at his most fun, Guardiola’s revolution, Tito Vilanova’s 100-point record-breakers and Luis Enrique’s unrelenting side with Luis Suarez and Neymar up top alongside Messi – were the closest thing modern football has had to the Harlem Globetrotters.

Frequently given that late Sunday evening slot in the glory years of Sky Sports’ La Liga coverage, they were the perfect antidote to that end of weekend dread, with Terry Gibson or Gerry Armstrong on co-commentary duty, right there with you marvelling at a kind of football you’d never seen before.

They felt like the legendary exhibition matches of Pele’s Santos, happening in a competitive league environment.

But those occasions have felt increasingly few and far between following the sale of Neymar in 2017 and the club’s gradual decline.

Messi has remained a towering presence, almost single-handedly leading the club to back-to-back titles in 2018 and 2019, but the side around him started to resemble Argentina, otherwise ordinary in the shadow of his greatness. At some point during Ernesto Valverde’s reign, they stopped being appointment viewing.

Yet again, the Argentinian – now Barcelona’s all-time top appearance maker and the top scorer in any of Europe’s leagues with 467 goals in the Spanish top flight – has been in scintillating form, with 19 goals and seven assists in 19 appearances since the turn of the year. 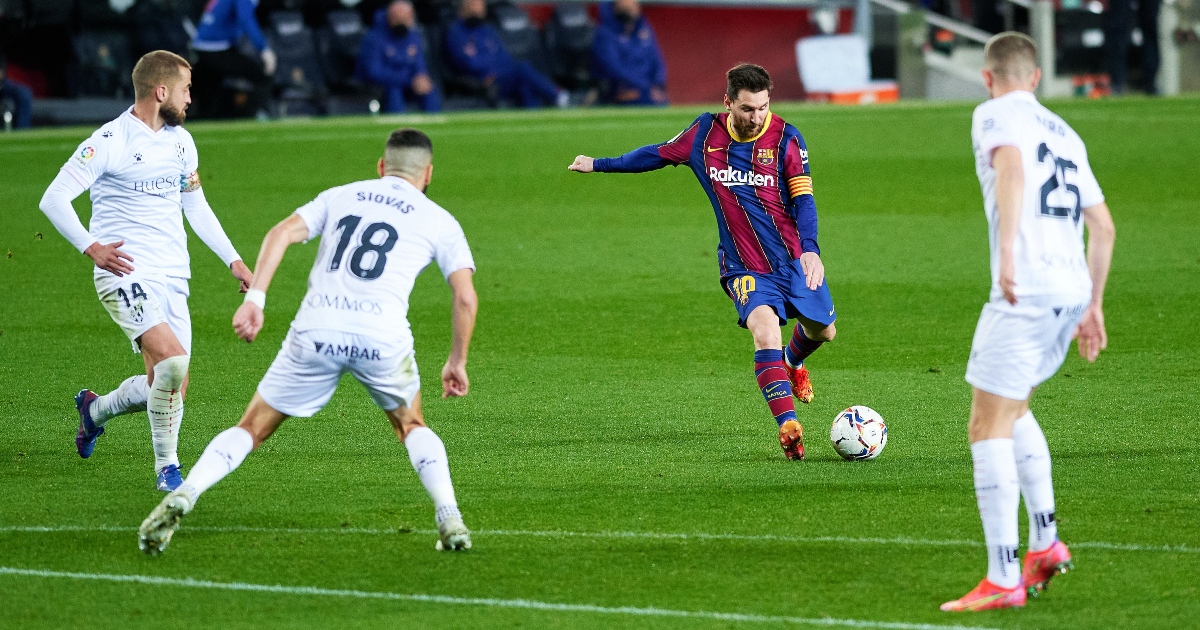 READ: Lionel Messi is taking the p*ss so much he can hit the bar twice while scoring

His form has got Barcelona back in contention for a domestic double, and now the supporting cast are starting to shimmer around him. Against La Real you were transported back to 2010; utterly captivating football you daren’t miss watching.

Not only are La Blaugrana picking up results – unbeaten in 16 in La Liga, with 12 wins from the last 13 – but they’re starting to do it in style, and at Anoeta, where even the great sides of the past failed to register a win between 2010  and 2017 (five defeats, three draws).

Messi and Jordi Alba demonstrated their telekinetic understanding in the build-up to Antoine Griezmann’s opener, 20-year-old American right wing-back Sergino Dest did his best Dani Alves impression with two goals, and Ousmane Dembele reminded us why there was so much hype around him at Borussia Dortmund with a fine solo effort.

Pushing up to the final third and fizzing with ideas and quick interplay, Real Sociedad were given their toughest test of the season against a side brimming with confidence, with arguably the greatest player in history at their heart.

But it wasn’t until the final minutes – after Real Sociedad had struck back with arguably the goal of the game from their talented 19-year-old winger Ander Barrenetxea – that you felt like were truly watching a classic Barcelona demolition job.

Often in recent years, Barcelona have looked happy to declare, conserving their energy once they’d gotten into a comfortable lead, but on Sunday evening at Anoeta they looked imbued by the spirit of Marcelo Bielsa. Always hungry for more.

What a move this was for Messi's second goal! 😍

Vintage Barcelona on a night when they hit Real Sociedad for six 🔥 pic.twitter.com/VVV2kcLTsv

In the 88th minute, Ronald Koeman’s men had eight players swarming around the opposition box, playing it out from their own half with slick passing, each player rarely taking more than a couple of touches, drawing Real Sociedad to the ball to open up space.

Eventually, fittingly, it was Messi at the end of the move, with a simple finish from nine yards, having featured prominently in helping cut through.

On a weekend where Karim Benzema scored a hat-trick to keep Real Madrid snapping at their heels, and Jan Oblak made a crucial last-minute penalty save to keep Atletico four points clear at the top, the pressure was on Barcelona to keep the pace.

Not only did they step up to the plate, but they did so with a vintage performance. If this is 2010 again, set aside two hours of your weekend to watch Barcelona. You’re not going to want to miss football like this.