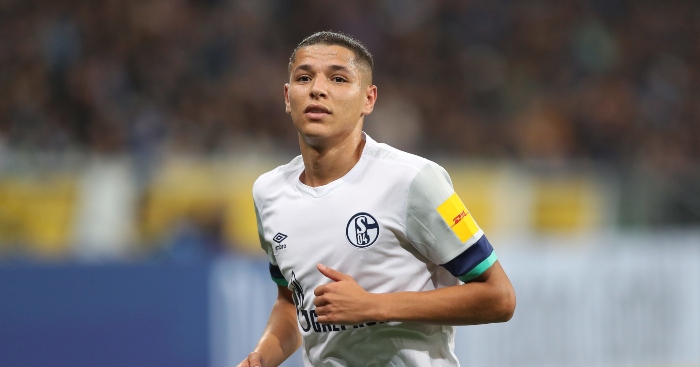 Schalke playmaker Amine Harit was being watched by Barcelona during his team’s match in Hoffenheim. While Schalke drew a blank, the Moroccan may well have entrenched himself in Barça’s good books.

For much of the last decade, the Catalan club have been able to fall back on an array of clinical attacking talents, led by Lionel Messi but with a storied supporting cast.

Before that, though, the seats were filled by the promise of watching players who couldn’t guarantee goals but could guarantee fun. Players like Ronaldinho, Rivaldo and – briefly – Riquelme. If they’re looking for another player of that ilk, Harit could well be their man.

A pirouette turn isn’t necessarily a standout moment, but when you watch the way Harit stops Andrej Kramarić in his tracks you’d be hard pressed to argue this one doesn’t count.

Even after he has turned back into space, Kramarić is staring at the area where Harit is supposed to be for a good couple of seconds, failing to square the necessary hand-off with the movement of the man he was meant to be tracking. It’s a real ‘wait, if he’s there, and I’m here, then…oh no’ moment, condensed into just a couple of frames.

Kramarić might have scored Hoffenheim’s opener in the second half, but there will be a little part of him that didn’t feel quite right when he left the pitch, and this is why.

It’s no surprise to see Harit’s name linked with Barcelona given his receipt of the Bundesliga’s Rookie of the Year award in 2018. Previous winner Ousmane Dembélé showed his class at Camp Nou last season, and it makes sense for a second recipient to follow in his tracks in pursuit of a new generation of first-team talent.

His 2018-19 campaign wasn’t the best, but this year things have changed for the better: four goals in eight league games equates to his tally in the previous 50, and the third of those four was one for the ages.

With Schalke being held 1-1 by Mainz and the opposition sitting deep, there shouldn’t have been enough space for anyone to do what Harit did. However, he has shown an ability not just to identify gaps which are there already, but to spot those which are about to open up.

The outside of the boot finish will evoke another former Barça recruit in Ricardo Quaresma, but the movement before it also brings to mind the smarts of the Portuguese international.

It feels like he is using his eyes to buy himself a shield, politely inviting the defenders in his path to wait that little bit longer before stepping to him. Not that any speedier movement would have been enough, if the jinks and feints are anything to go by.

Quaresma’s arrival might have come at the wrong time for player and club, but Harit’s timing this season has often seemed flawless.

In a team which enjoys as much possession as Barcelona, and whose players feel as though they’re there to be got at, it can be important to find individuals who can use their body as well as they can use the ball.

When watching Harit, it can feel as though he is throwing a second version of himself whenever he throws a feint or pulls a dummy, giving himself a personal picture of Dorian Gray to bounce off defenders and take the bulk of the physical hits.

The pirouette against Hoffenheim wasn’t his first of the season, you see. That came against Borussia Mönchengladbach, and was followed by one of those displays of ball carrying which looks so effortless you wonder why people don’t do it all the time.

Over the last few years, Barcelona have strived to find someone capable of taking the burden off Messi when his time at Camp Nou comes to an end, with varying levels of success.

Whether Harit does enough to convince them to take the plunge, or whether he stays in Germany for the time being, we’re likely to continue enjoying seeing him in action.

For those of us with fond memories of Ronaldinho and the other great entertainers at Barcelona, the sight of this sort of player in Catalunya is more than enough to get us to pay attention.

Nine players Barcelona missed out on – and who they signed instead