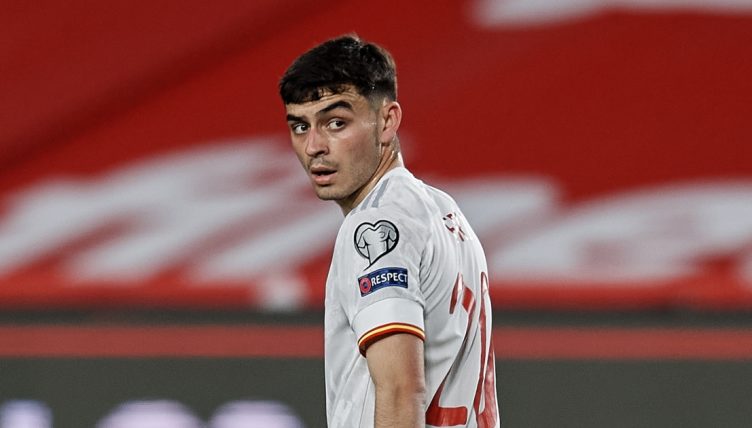 Think back to what you were doing as an 18-year-old.

I can’t speak for everybody of course but at that age, I was concerned about my appeal to the opposite sex, experiencing Bristol’s nightlife and worrying about being left behind while the rest of my friendship group left for university.

I certainly wasn’t bossing midfield during a European Championship semi-final. But Pedri isn’t most teenagers.

The pint-sized midfielder hadn’t even played a competitive La Liga game this time 12 months ago before Barcelona signed him from Las Palmas. Even then, the coaching staff at Barca rated him as one for the future.

But Pedri has made himself indispensable for his club over the past year, displaying footballing wisdom beyond his years and settling into midfield with the comfort of a university student returning to the family home, emptying the fridge and resuming their normal position on the sofa.

Spain simply couldn’t ignore him any longer. Making his debut during a World Cup qualifier against Greece in March, Pedri then became the youngest Spanish player to play at the Euros when he started the 0-0 draw with Sweden in the group stages.

He’s played all but one minute of Spain’s exhausting campaign since and Tuesday night’s semi-final was Pedri’s 62nd start of the season. Even for a teenager, that requires some serious stamina.

The match against Italy was a joy to behold. Two high-quality teams feeling comfortable enough in their own skins to play attacking football played in front of a crowd of enthusiastic British-based Spanish and Italian fans.

Italy eventually won on penalties following a pulsating 1-1 draw but it was one of those matches where neither side deserved to lose. Indeed, Spain probably shaded it on the night.

Even Danny Murphy proclaimed that he’d ‘not enjoyed a match as much in years’, although this was delivered in the tone of a man witnessing joyriders take off with his car.

And still, in the middle of a match that personified football as an art form, the 18-year-old from Tenerife stole the show.

Luis Enrique: Did you see what a kid of 18 called Pedri did (vs. Italy)? Not even Andres Iniesta has done what he's done. I've not seen what Pedri has done at Euro 2020 from any 18-year-old in a Euros, a World Cup, an Olympics… I've never seen anything like it. It defies logic.

By the end of 90 minutes, Pedri had completed all 55 of his attempted passes. By the end of extra-time, that had dipped to 65 out of 67 for which he was presumably punished by being placed into stocks and pelted with rotten tomatoes.

Some will look at these statistics and label Pedri as a stats padder, wedded to the sideways pass like Mark Corrigan is to anxiety.

Those people were presumably not watching when he dissected the Italian defence with a sumptuous through ball inside the first 15 minutes.

It was already apparent at this early stage that the game would be a special one; Italy had dominated the opening five minutes but the pendulum swung away from them once Spain gained control of the ball and put together some neat passing patterns.

Sergio Busquets, the grand conductor of Spain’s midfield and one of the last remnants of their imperial phase, shuttled the ball forwards towards a midfield partner 14 years his junior.

Pedri did the rest. Turning with ease, he found himself with a rare pocket of space that Italy had carelessly left for him.

He drove into it, needing no second invitation. All of a sudden, four Italian players had engulfed him with the remorseless feel of a gang of crocodiles closing in on a baby deer.

Pedri’s answer? Showing composure beyond his tender years, he waited until his opponents were fully drawn before firing a through pass directly into the path of Mikel Oyarzabal.

Maybe the pass was slightly beyond his team-mate’s comprehension. Oyarzabal found himself unmarked with only the goalkeeper to beat but was unable to control the ball and the chance was gone in an instant.

Yet, take nothing away from the vision and execution of the move that showed Pedri is destined to become one of European football’s midfield maestros. If he isn’t already.

His youthful demeanour was perfectly illustrated following the penalty shoot-out. Having given absolutely everything, defeat proved too much to handle as he wept in the arms of team-mate Thiago Alcantara. Who, lest we need reminding, is being kept out of the Spain XI by Pedri.

Despite their elimination, Pedri has truly announced himself to a global audience with his enviable ability and footballing maturity.

If any perspective is needed, just think about what you were doing at 18.