Bayer Leverkusen are brilliant to watch – and might finally win something 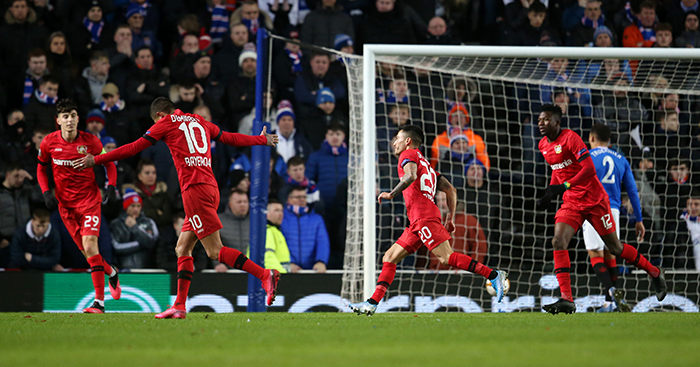 Bayer Leverkusen are famous for their failure to translate promising positions into actual success, but the culmination of the 2019-20 season will provide them with yet another chance to end their silverware hoodoo.

After making steady progress both on and off the pitch over the last few seasons under manager Peter Bosz, Bayer Leverkusen are starting to once again cement their position as one of Germany’s top clubs.

With another top-five finish in the Bundesliga looking likely when play hopefully resumes around the world, Bayer have instead turned their attention towards winning much overdue silverware on both the domestic and continental fronts.

Third division giant-killers 1. FC Saarbrucken are all that stands between Leverkusen and a place in their first DFB-Pokal Cup final since 2008, while Die Werkself have a solid 3-1 lead over Rangers in their Europa League last-16 tie after dominating the first leg at Ibrox.

Eighteen seasons on, Bayer Leverkusen are hoping for their first taste of silverware since the 1992-1993 season.

Like many German clubs, Leverkusen pride themselves on their youth system and the playing time of their young stars. Over the years the club has played a pivotal part in the development of Arsenal’s Bernd Leno, Barcelona’s Arturo Vidal, Manchester City’s Leroy Sane and former Germany international Michael Ballack to name but a few.

This season is no different. Bayer now boast eight regular first-team players under the age of 24 with stand-out talent Kai Havertz at the forefront of their push for glory.

Another graduate of their youth set-up in North Rhine-Westphalia, the 20-year-old recently became the Bundesliga’s youngest ever player to score 30 goals with a cool finish in a 4-0 home drubbing of Eintracht Frankfurt.

This season alone Havertz has nine goals and eight assists from 33 matches across all competitions, highlighting why he is being courted by some of the biggest football clubs in the world.

“He’s the full package,” Bosz said of the attacking midfielder in February. “Since the turn of the year it’s been the Kai Havertz we all knew last season. He’s incredibly important for the team.”

With mammoth bids seemingly on the horizon, it’s extremely likely that Havertz will leave the German club in the next transfer window, but Leverkusen’s fantastic youth scouting program means there are plenty of other youngsters ready to take on the mantle as the team’s star.

Indeed, Die Werkself have invested over £50million over the past two transfer windows on four youngsters who have already made a massive impact in the first team.

Forwards Moussa Diaby and Nadiem Amiri joined in the summer from PSG and Hoffenheim respectively, while the captures of centre-back Edmond Tapsoba and highly-rated Argentinian midfielder Exequiel Palacios capped off a productive January transfer window for the Bundesliga outfit.

With talk of £100million offers set to come in for Havertz, Leverkusen will certainly back themselves to reinvest wisely as they target a prolonged title push in the Bundesliga over the coming years.

Backing up Leverkusen’s young stars is an experienced spine, with 30-year-old Charles Aranguiz an ever-present in midfield, and Julian Baumgartlinger and twins Lars and Sven Bender offering further experience along the backline and in the holding role.

And, despite being only 22 and 24, winger Leon Bailey and defender Jonathan Tah have played nearly 300 games for Leverkusen between them, providing both youth and experience.

It’s that blend that has enabled Peter Bosz’s tactical set-up to produce some stunning, free-flowing attacking football which doesn’t come at the expense of defensive fault.

This was particularly evident in their Europa League knockout tie against Liga NOS league leaders Porto, who they comfortably beat 5-2 on aggregate to set up the showdown with Rangers.

The movement at times going forward was mesmeric from Havertz & co, especially in an open second leg at Estadio do Dragao, but the experience at the back limited a Porto side that has scored 89 times this season to just two goals in 180 minutes of play.

The club’s sturdy defence has seen them gain valuable points on the road throughout the Bundesliga season too, taking a solid point away at RB Leipzig and beating defending champions Bayern Munich at the Allianz Arena 2-1 back in November.

Bayer’s nickname of ‘Neverkusen’ should tell you all you need to know about their list of honours. On the domestic front, one lonely German cup.

The club’s inability to win silverware was highlighted at the turn of the millennium when Bayer finished as runners-up in four Bundesliga campaigns, a German Cup, and the Champions League, managing all three in the space of just 11 days in 2002. 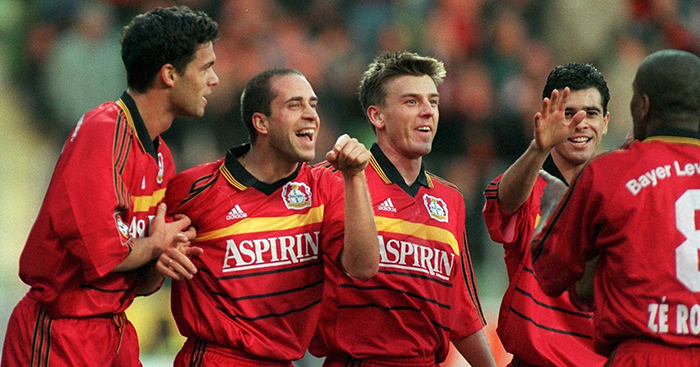 There was a hope among fans that a breakthrough was in sight, but Michael Ballack and Ze Roberto were both sold to Bayern that summer and Leverkusen finished the following season in 15th position, their lowest finish since 1982.

In Europe, meanwhile, Bayer won their only title in 1988 when they fought back from a 3-0 first-leg loss to Espanyol to beat the Spaniards on penalties in the UEFA Cup final. Since then, European qualification has been consistent but not exactly rewarding.

Besides finishing as runners up in 2001, Bayer have only got past the round of 16 on five occasions in their entire history across both the Champions and Europa League despite participating in Europe 25 times.

Since their last piece of European silverware, clubs of similar stature across the continent have outdone Leverkusen, with Porto winning both the Champions League and Europa League, Sevilla winning five Europa League titles, and smaller clubs like Zenit, CSKA Moscow and Shakhtar Donetsk all winning the Europa League since 2003 without having a golden generation of talent in their ranks.

With emerging world-class talent and a solid blend of experienced players in their squad this season, Bayer Leverkusen will hope they too can lift this trophy later this season to finally end their long wait for tangible success.

10 of the best sides that didn’t win the UCL: Leverkusen, Jose’s Chelsea…