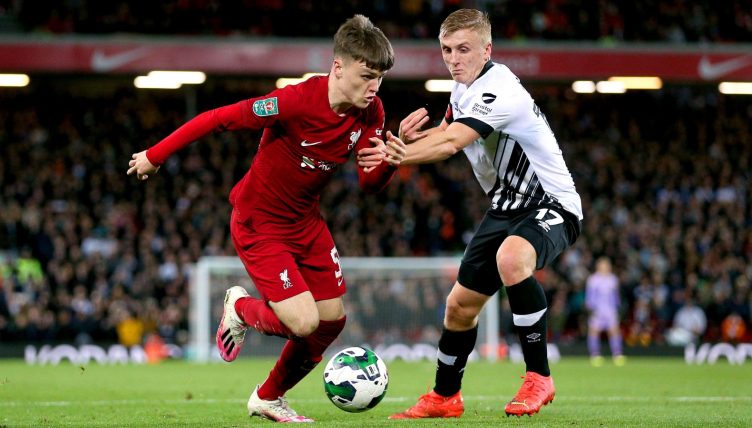 It took a 16-year-old Scot to sprinkle some stardust on a match that felt more like a box-ticking exercise for Liverpool.

Yes, the Carabao Third Round is never likely to set the pulses racing especially when a host of internationals are protecting their limbs before the upcoming World Cup.

But Jurgen Klopp’s side took the concept of ‘huffing-and-puffing’ and turned it into an art form on Wednesday night. They did create more chances than Derby but that should be a requisite against League One opponents and it took a string of substitutions to rouse Anfield from its slumber.

Darwin Nunez bought his endearing brand of chaos and class to the occasion but even he was upstaged by a teenager from Ayrshire. Doak joined Liverpool from Celtic this summer and, after impressing in the youth set-up, made his senior debut as a 74th-minute replacement for Fabio Carvalho.

Blessed with brilliant ball control and the fearlessness of youth, he immediately set about twisting Derby limbs as if toying with play-doh.

One such moment towered above an impressive catalogue; Doak ignored an over-lapping Harvey Elliott to jinx past two Derby defenders and drift dangerously infield.

In truth, the cross that followed wasn’t up to much and acted as a reminder of Doak’s rawness. But taking opponents on with the ball at your feet is a magnetic quality and this Salah shuffle was a hint of somebody Liverpool could conceivably build their attack around in the future.

“That’s Ben. His instructions were easy. ‘Do what you do all the time’,” Klopp told reporters after squeaking through. “He’s a really lively boy, a smart player, a good dribbler, fast, can use both legs.

“It’s good. It was nice to watch, really nice to watch. Coming in and immediately making an impact. A lot of things are obviously natural to him which is really helpful.

“Pretty sure his family were here tonight. I can remember when I saw them at the AXA when we signed the boy and how excited everybody was. Tonight is the next step. It’s cool, he showed up obviously.”

And the Liverpool manager spoke about the benefits of blooding a host of promising youngsters in the Carabao. “I liked it,” Klopp said after making 11 changes for the visit of Derby.

“It’s the most difficult thing in football if you are facing an opponent who is deep defending, counter-attacking, long balls, set-pieces. People don’t like it when you get knocked out. It’s like, ‘Very young, you don’t take the competition seriously.’ But that was never true.

“Even if we lose the game in the penalty shoot out, imagine if the people wouldn’t have seen Stefan, Bobby, Ben, Mel, Layton. Fabio is only a little bit older. Calvin of course and Harvey comes on.

“Eight or nine really young boys and it’s so nice to give them the opportunity to play real man’s football against a team who wanted to get through. To get through, it’s a great experience.”

And those who congregated at Anfield will surely be boring their future grandchildren with stories of attending Ben Doak’s debut. The boy has serious talent.

TRY A QUIZ: Can you name Liverpool’s top 30 goalscorers in the Premier League?