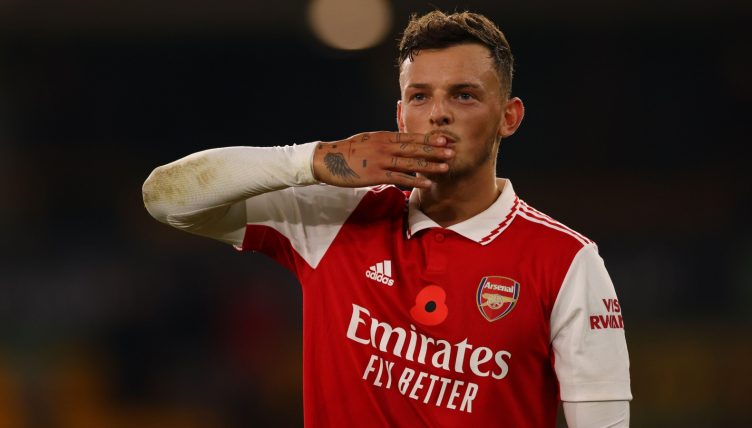 Forget Brexit, Trump and Netflix; we are currently living through the Ben White era and we are not worthy.

Plenty of pundits clambered over themselves to decry White as an over-priced and over-hyped signing when Arsenal shelled out £50million for the Brighton defender in the summer of 2021.

His performances during his debut season at the Emirates were more than satisfactory, but the return and blossoming of William Saliba put White’s place under threat.

Happily, Mikel Arteta had the perfect solution up his sleeve; stick White at right-back, where he’d played a handful of times for Brighton, and watch him turn into the reincarnation of Cafu for the rampant Premier League leaders. Simple.

The modern full-back is arguably the most important player in an elite side, tasked with providing defensive solidity with an unceasing supply of crosses that help bypass the crowded central areas.

And White is playing his part to perfection. No Premier League team has conceded fewer goals (11) or kept more clean sheets (seven) than Arsenal in 2022-23, while only Manchester City have allowed the opposition fewer shots per game.

But the more thrilling development has been White’s attacking prowess, which made him a no-brainer inclusion on the flight to Qatar.

The latest example came on a dank evening at Molineux, with Arsenal looking to sweep aside bottom-dwellers Wolves to take a five-point lead into the World Cup break.

Wolves threatened little, but that meant Arsenal’s concentration needed to be at its peak to deal with their rare forays forward. It was from this situation that White would demonstrate his jaw-dropping transformation.

As an opposition attack broke down, White collected the ball inside his own penalty area, strode forward and swept an imperious pass towards the galloping Gabriel Jesus.

Some critics would’ve described it as a clearance, hoofing the ball from danger with little forethought. They’d be wrong; White had already spotted his team-mate with a canny glance and found him with the precision of a state-of-the-art GPS.

Even Mesut Ozil, who could thread balls through the eye of the needle on demand, would’ve been proud of that one.

“I am really happy with him,” Arteta said earlier this month. “He is playing in different positions and is acclimating himself in a great way to that full-back position. His understanding with the players around him is top. I really like him.

“He trains every single day and he plays under any circumstances. I love the boy.”

He’s not the only one; White has been taken into the hearts of Arsenal supporters who cannot get enough of his elite mentality.

Moments like his Ozil-esque pass at Molineux make such hero worship inevitable; Sky Sports would’ve replayed it for weeks on end had it come from the boot of Joao Cancelo or Trent Alexander-Arnold.

He’s been described as underrated in some quarters, but that surely won’t remain the case for long. White is the real deal and we’re fortunate to be living in an era graced by his talent.

TRY A QUIZ: Can you name every player to get 20+ Premier League assists for Arsenal?