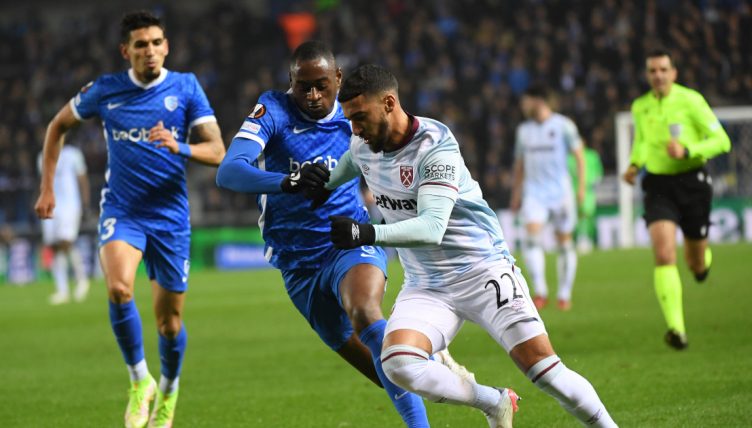 On a cold Belgian night, up stepped Said Benrahma of West Ham to warm the Genk stadium with a nutmeg, goal, and performance worthy of the European stage.

Just like David Moyes’ now 1000 game strong career as a football manager, there were ups and downs on West Ham’s latest European adventure, but Benrahma’s brace all-but-confirmed safe passage to the knockout stages.

It was another decent result for this thoroughly decent Hammers side full of properly decent players capable of much more than decent football.

And on this Thursday night, in this North Belgian city with its typical Flemish architecture, it was Benrahma that demonstrated just what extraordinary things he can do.

His first goal was a solid strike on the hour mark which topped off an impressive team move, something increasingly normal to see from this Hammers side, made all the better by the fact the Algerian’s strike went through the legs of Genk’s 19-year old goalkeeper Maarten Vandevoordt.

But Benrahma was not content with only the one nutmeg goal. No, he would have a second and this time it would be a stunning solo move that demonstrated the full extent of his increasing football potency.

Receiving the ball out on the left, he turned on a sixpence to face the Genk defender and knew in an instant he had the beating of him.

He dashed the ball to the right of the blue shirt and darted round the defender’s other side as if teleporting behind the Genk player’s back.

There’s a momentary pause as all the Genk players process what they’ve just seen before collectively yelling “oh Shit” and chasing after West Ham’s Algerian attacker who had already begun beelining for the goal.

The defender he just turned inside-out reached a hopeful hand towards him in the vague hope of dragging him back to detract from the move he had just been subjected to. It was like when you played football as a kid and someone absolutely did you and you had to retroactively cover up what had just happened by taking them out by any means necessary.

But it was to no avail. Benrahma was through on goal, the corridor leading to the Gent net shrinking around him as defenders closed in from all angles and Vandevoordt stepped outwards to meet him once more.

Not fazed, Benhrama picked out one of the few places he could to put West Ham in front, once more sliding the ball in between the legs of the young Belgian keeper.

Plenty of West Ham fans would have raised a glass of some unnecessarily strong Belgian beer to that; Proost.

He leaves a defender in the mud before skipping into the box and finishing through the goalkeeper's legs 🤐#UEL pic.twitter.com/cX0u9oH5h8

All that hard work would be undone a few moments later when Tomas Soucek sliced a header attempting to block an incoming cross almost impossibly into the far corner over Alphonse Areola and in to make it 2-2.

No matter; the draw put West Ham basically through, and with Liverpool at the weekend they have bigger fish to fry.

No doubt they will put in a perfectly decent performance at the London Stadium, but with Behrahma, Jarrod Bowen, Michail Antonio and co, they certainly look capable of a big result. Write them off at your peril.