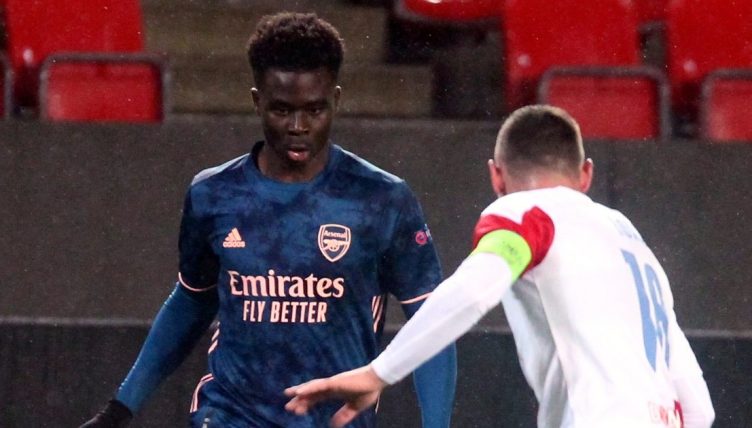 With Arsenal two goals to the good in the second leg of their Europa League quarter-final tie with Slavia Prague, the hosts’ defence’s eyes filled with fear as Bukayo Saka glided towards the penalty area once.

The late away goal Slavia had clawed back at the end of the first leg was, by this stage, useless. Mikel Arteta’s side now led the tie 3-1 on aggregate.

No one would have blamed them if they had chosen to sit back and be conservative. But Saka had no interest in being so mind-numbing.

Five minutes followed in which the 19-year-old, notoriously kind and warm-hearted away from the pitch, went into merciless mode.

Following Slavia’s restart, Arsenal bombed forward as soon as they could. With Smith Rowe carrying the ball down the right-hand side, Saka darted into the box from deep, leaving a panicked Jakub Hromada with no other course of action other than to scythe him down.

Alexandre Lacazette duly dispatched the spot-kick but, even with their hosts now needing three unanswered goals to go through, Saka was not prepared to let up the torture.

SAKA THAT IS CLASS! 🔥

A fantastic start to the game for Arsenal who have scored THREE early goals! 💥💥💥#UEL pic.twitter.com/I8tStBBmUm

This time, the north Londoners allowed three minutes to elapse before once again putting their opponents to the sword as some smart play from Callum Chambers saw Saka once again galloping into space down the right.

It was centre-back David Zima’s turn to be bamboozled by the England hopeful, who, with two perfect touches of his left foot, reduced his opponent to a baffled mess, staring desperately in every direction hoping to relocate the winger.

Ondrej Kolar was next on his list of opponents to embarrass as the shooting opportunity presented itself. Having forced a good save from him earlier in the game, diving to his right, Saka this time switched things up, dragging an early strike to his near post and leaving Kolar rooted to the spot.

If ever a situation called for the ‘Stop! He’s already dead!’ Simpsons meme, this was it, even before Lacazette added a fourth in the second half.

By all accounts, as soon as he steps off the pitch, you will struggle to find a nicer player in the Premier League than Saka.

Soon after breaking into the first team, he was invited back to his old secondary school to open a new building. He stayed for two hours to take selfies and chat with the current students. Nobody asked him to, he just did it.

A signed Arsenal shirt also hangs proudly in Greenford High School’s reception area along with a thank you note from the teenager.

An ability to combine this genial off-field personality with a relentlessly ruthless on-field persona has served Saka so well in his career to date. The influence such behaviour can have on others both on and off the field cannot be underestimated either.

In a few years time, the next generation of youngsters will graduate from Hale End. But they will do so with a blueprint of how to act from a player likely to be at the top of the game for a long time yet.

As Arsenal took a knee before kick-off on Thursday night, their opponents, fresh from disgracing themselves in the wake of Ondrej Kudela’s racist abuse of Rangers defender Glen Kamara, stood together in some weird show of unity. It was hard to feel anything other than hope that the Gunners would be in brutal form.

Saka and co were more than happy to oblige, and Arsenal stand to reap the rewards for the best part of a decade if he can maintain the balance between Dr Jekyll and Mr Hyde. Just make sure you don’t get on the wrong side of him.