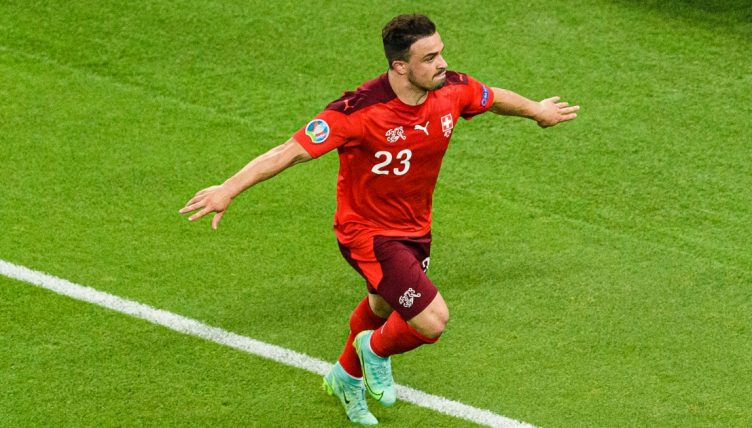 One of the joys of international tournaments is seeing those usually immune from football’s charms suddenly develop a keen interest.

That’s what’s happened in my shared house. Whether it’s the sense of occasion or the realisation that every game will be shown on the downstairs TV anyway, my football-averse housemates are really starting to enjoy Euro 2020.

And one benefit of watching football with people like this is their ability to cut the bullshit and summarise the essence of a match into one simple factor.

England drew with Scotland because they were “too slow”. Portugal lost against Germany because they “couldn’t defend crosses”. And Xherdan Shaqiri “looks more like travelling circus strongman than a footballer, but he’s bloody good”.

A lot of talk around Shaqiri centres around his build. Yes, he does look more like a rugby union hooker or the first footballer to resemble a cube. A lithe youngster at FC Basel, Shaqiri noticeably bulked up during his spell at the scientific lab otherwise known as Bayern Munich.

But that should never detract from his wonderful talents as an attacking player.

As Group A came to its conclusion on Sunday evening, we eschewed the temptations of Italy’s meeting with Wales for the chance of goals and drama between Switzerland and Turkey.

Both needed to win and, despite all available evidence, the pre-match feeling was that Turkey simply couldn’t play worse than their previous two games.

They didn’t, and they couldn’t live with Shaqiri as Switzerland claimed a crucial 3-1 victory that just about keeps them in the tournament.

The 29-year-old has struggled with injuries and a lack of playing opportunities during his spell at Liverpool but, excuse the cliche, remains a bewitching player on his day.

Shaqiri made only five Premier League starts last season and his only goal in any competition came against Lincoln City in the League Cup. But he remains integral to Switzerland and had scored in their past three major international finals.

We can now make that four. On a sweltering night in Baku, where those in attendance were largely supporting Turkey, Shaqiri delivered a match-winning performance just when his country needed it the most.

The game started at a terrific tempo, with Turkey actually looking quite dangerous in attack. This strange and unusual state of affairs lasted precisely six minutes before Haris Seferovic slotted the Swiss ahead.

Even at this early stage, Shaqiri was beginning to dictate play and the Turkish defenders looked unnerved whenever he was in possession of the ball.

That would explain the aghast looks on their faces when Steven Zuber collected a blocked Serferovic shot and calmly laid the ball into Shaqiri’s path.

The Liverpool forward needed no second invitation. Taking a perfect steadying touch, Shaqiri sent a curling effort with his weaker right foot arcing into the top corner of Ugurcan Cakir’s goal in a manner that suggested the film ‘Bend it like Beckham’ should have been based upon him.

Shaqiri’s finish aptly illustrated the difference between the teams. Turkey are not without talent, but their play during Euro 2020 has been naive in the extreme. A more pragmatic Switzerland are elevated by mercurial talents like Shaqiri, who is able to produce finishes that belong at the highest level.

Much of the credit for this should be attributed to Switzerland manager Vladimir Petkovic. His decision to allow Shaqiri to play a free role was inspired, as it allowed the team’s talisman to drift in between the defensive lines and exploit any space that he found.

He was denied a quickfire second through a fine save by Cakir and it only seemed a matter of time before Switzerland added to their tally.

Turkey belatedly made a game of it after half-time as Irfan Kahveci spanked in a long-range effort – their first goal of the whole tournament.

But Shaqiri wrenched the match away from them again. The impressive Zubar played a one-two with Granit Xhaka and slotted the ball across goal towards the onrushing forward. Without breaking his stride, Big Shaq shot unerringly and first-time into the roof of the net.

After the game, he told reporters: “The first (goal was particularly good), with my weaker right foot. Of course I was very happy with them both. I was happy with the performance and very happy that I was able to help the team.”

The discovery that this circus strongman has a brilliant right foot is the kind that makes international tournaments so alluring.

Scholz took Xherdan Shaqiri’s bait, only to find him in a different postcode