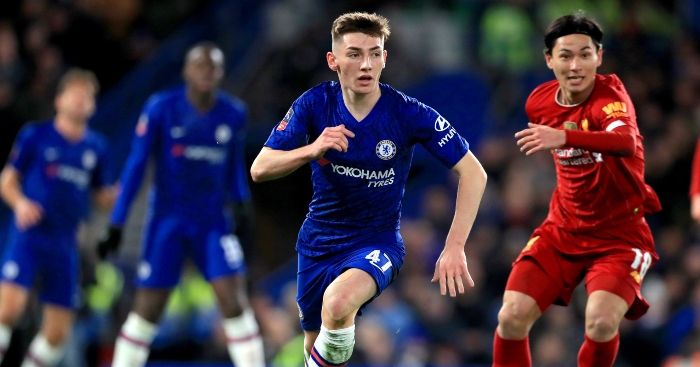 Ahead of the FA Cup fifth round, there was plenty of talk about how Liverpool’s Curtis Jones would fare against top opposition. However, as things transpired, Chelsea man Billy Gilmour was the youngster who really caught the eye.

Unlike some of the other young players used by the Blues this season, Gilmour didn’t have any previous experience of working with Frank Lampard. That hasn’t stopped the midfielder featuring this year, though, and his 90 minutes against Liverpool follows a start against Manchester United in the League Cup.

And, in one moment against Fabinho, he showed how he belonged there.

If you were to pick out one player who’s the least likely to take shit from anyone, it’s Fabinho. The former Monaco man is uncompromising enough that you’d expect him to react to humiliation by pinning his rival up against a wall until they provided him with a formal written apology.

Gilmour didn’t just humiliate the Brazilian, though. He fully schooled him in such a manner you can only assume he didn’t realise who he was dealing with.

A nutmeg on Fabinho ought to be the equivalent of a red rag to a bull. And yet, once Gilmour recognised what he had done, he didn’t freeze and await his punishment. Instead, he just carried on as if he does this kind of thing every day.

The most striking thing about the nutmeg isn’t just the subtlety, but how slowly it all seems to go off.

After the embarrassment, we witnessed countless tweets about how Gilmour “sent Fabinho” back to Monaco, but it was less a case of returning him from whence he came as it was leaving him where he was and moving on both literally and figuratively. The former implies stasis from the Chelsea man, but this was the opposite.

As the ball evades Liverpool’s number three, his legs turn to jelly. His mind knows where the ball is headed, but his body cannot compute at the same speed. His movements are no longer fluid but robotic, as if he’s a chess piece only able to move from one square to the next.

Instead of speeding past Fabinho, Gilmour waits for the Brazilian to come to a halt before ensuring he remains planted in the Stamford Bridge turf. Could we yet see the teenager do this to everyone he conquers, leaving them not just chasing shadows but becoming them?

Looking at Chelsea’s current season, it can be easy to forget the pessimism of August when the club was hit with the triple-whammy of a transfer ban, the departure of Eden Hazard and an opening day thrashing by Manchester United.

This was supposed to be a season in which fans took solace from the development of younger players, much like Gilmour’s standout display against Liverpool.

An impressive autumn might have opened the door for greater disappointment if targets are missed, but that doesn’t mean we should forget what was on the horizon before everything started exceeding expectations. And it certainly shouldn’t stop anyone getting excited by, well, genuinely exciting moments.