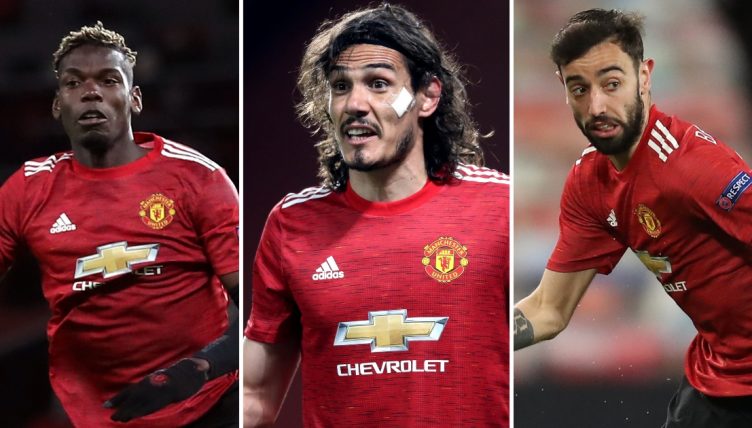 Wayne Rooney, Carlos Tevez and Cristiano Ronaldo formed one of the most ruthless attacking trios seen in Manchester United‘s history – 13 years on, Bruno Fernandes, Edinson Cavani and Paul Pogba look like they’re trying to match them.

When Tevez signed for the Red Devils in the summer of 2007, questions were raised as to how Sir Alex Ferguson could possibly get the best out of the Argentinian, Rooney and Ronaldo at the same time.

Those questions, of course, now look utterly ridiculous. The trio scored 79 goals between them throughout the 2007-08 campaign, leading the club to a 10th Premier League and second Champions League title in the process. The link-up play between them often bordered on the barbaric.

Trophies continued to flow into the red half of Manchester after Tevez and Ronaldo flew the nest in 2009, but as David Moyes, Louis Van Gaal and Jose Mourinho each tried and failed to return that attacking savagery to the club, it was the 07-08 clique that many fans found themselves longing for.

On Thursday night, no one would have blamed Ole Gunnar Solskjaer if he had reacted to the performances of Cavani, Pogba and Fernandes like a scientist might after finally cracking a formula that had long alluded his counterparts. “Eureka! I’ve finally done it!” the Norwegian probably shouted into a BT Sport microphone in a parallel universe.

When Roma arrived at Old Trafford for the first leg of their Europa League semi-final, few would have predicted the three-man masterclass that was about to ensue. While Cavani, Pogba and Fernandes have all frequently impressed, top performances from all three in the same game had proven elusive.

Just eight minutes had elapsed when Pogba collected the ball on the left-hand side, pirouetted gracefully away from Chris Smalling, dragged the ball beyond the reach of Amadou Diawara’s toes and fed Cavani on the edge of the box.

In his peripheral vision, a blur of red darted into the penalty area and the Uruguayan cushioned a perfect pass into his team-mate’s path. Fernandes iced the cake nicely with a chipped finish.

Even when Roma turned the game on its head before half-time through Lorenzo Pellegrini and Edin Dzeko, a sense of dread will have remained among the visitors having witnessed what the United trio could do.

Two minutes into the second half they were at it again with arguably an even better goal. A long ball through the heart of Roma’s midfield from Pogba found Cavani, who turned neatly and moved it to Fernandes. The Portuguese chipped a delicate pass back into the striker’s path, and his first-time side-footed finished bent beautifully into the top corner.

Cavani claimed his second just after the hour mark, gobbling up a loose ball after substitute goalkeeper Antonio Mirante could only parry Aaron Wan-Bissaka’s shot. Just five minutes later it was 4-2. As a low Marcus Rashford cross looked for Cavani’s instinctive near-post run, the Uruguayan was tripped by Smalling. Unsurprisingly, Fernandes made no mistake from the spot.

With 74 minutes on the clock, Roma were begging for mercy. A short corner from Luke Shaw was played to Fernandes, his first-time cross perfectly weighted for Pogba to get his name on the scoresheet with a header. 5-2. Eleven minutes later, substitute Mason Greenwood raced onto a Cavani pass to make it six on the night, all but ending the tie with 90 minutes still to play in Rome.

One of the greatest qualities of Rooney, Tevez and Ronaldo as a unit was their utter ruthlessness. There was never time for sympathy for those they were laying waste to. The same can now be said for this new group.

While there are many differences between them in terms of physical attributes and playing styles, the core characteristics and expert knowledge of one another crucially remains common across both trios.

In an ideal world, Solskjaer would retain the services of all three beyond the summer transfer window. But even if next season begins without Cavani or Pogba, or both, they have given the United boss a valuable blueprint of what is required to form another iconic attacking trident.