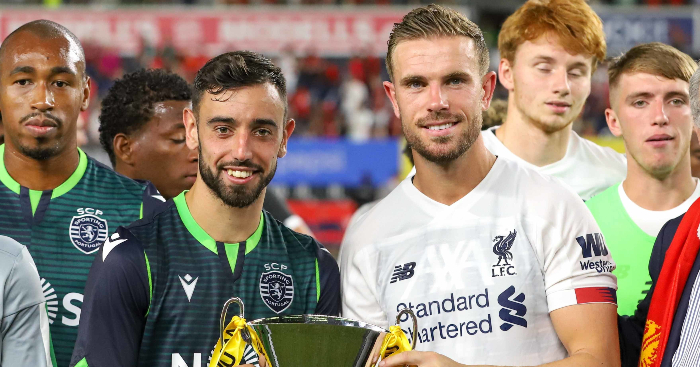 It took Bruno Fernandes just four minutes to show he’s a player to be admired and feared in equal measure the last time he came up against Liverpool, back in the summer of 2019.

Taking on the then European champions in a pre-season friendly at the Yankee Stadium in New York, Sporting Lisbon were fired into an early lead by their star man.

It was a speculative 30-yard effort, struck with plenty of dip and swerve, making it awkward for Simon Mignolet. Liverpool may well have confidence that Alisson would have capably dealt with it, but the Belgian allowed it to squirm under his grasp.

The early moment set the tone for a sensational individual display, which will no doubt have excited Ed Woodward, Ole Gunnar Solskjaer and co as they were scouting him for Manchester United.

Playing in a wider role than he does for his current club, out on the left, he gave Trent Alexander-Arnold a much more difficult evening’s work than he might have expected from a balmy pre-season friendly. This was no casual run out.

Mignolet actually put in a solid display after his early blunder, making a series of good stops, with Fernandes at the heart of everything Sporting were doing in the final third.

He registered three shots, five crosses and six chances created, eventually teeing up Wendel for a second-half equaliser after Jurgen Klopp’s side came from behind to take the lead.

But while he was a menace with the ball at his feet, giving Liverpool untold headaches at the back, arguably his most impressive moment of the match came off the ball.

Just watch his run here as he powers back from the final third to put his body in the way of a goal-bound Georginio Wijnaldum effort. If he’s putting this kind of work into a pre-season friendly, just imagine how pumped up he’ll be for his first trip to Anfield with United.

It wasn’t hard to see why the Portugal international was one of Europe’s most in-demand players at the time, given the mix of full-blooded dedication and the technical ability to thread a defence-splitting pass that few others possess.

Klopp was undoubtedly impressed, seeking out the playmaker after the match to give him a hug and heap praise on his performance.

He was similarly effusive in his praise in his post-match press conference when asked about the prospect of Sporting’s talisman moving to Old Trafford – six months before he eventually did.

“If he does that, then we’ll face him, he’s obviously a really good player,” Klopp said.

“They already have a few really good players, but that would make them probably stronger. It’s not nice. But it’s not our cup of tea, to be honest.”

Klopp, as ever, knew what he was talking about.

Almost a full calendar year has passed since United last faced Liverpool. At a packed-out Anfield, the Reds won 2-0 to move 16 points clear at the top of the table and 30 ahead of Ole Gunnar Solskjaer’s men.

It was reflective of the gap in quality between the two sides at the time. Soon after, Fernandes was finally signed and has more than lived up to the hype after the long-running transfer saga, with a transformative effect on their fortunes.

As the 2020-21 season reaches the midway point, Liverpool are three points behind United.

Klopp knew what he was talking about when he said it wouldn’t be nice for his club, but he might not have expected the impact to be quite so immediate.