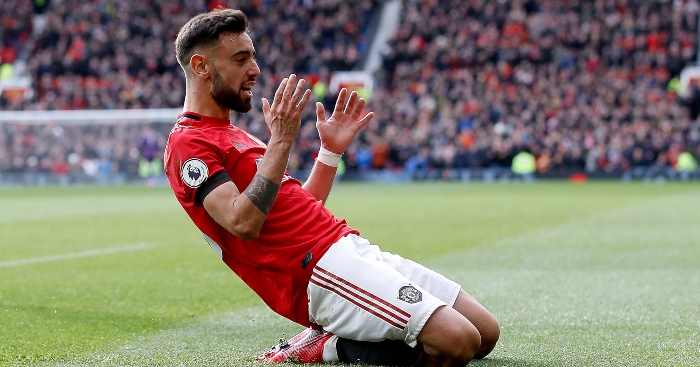 For much of the last year, we’ve been hearing how Manchester United‘s problems can’t be solved by just one player. However, against Watford, Bruno Fernandes made another attempt to prove that theory wrong.

The former Sporting midfielder scored his first United goal in the 3-0 victory and produced the kind of all-round performance fans have been longing to see from a player in his position for much of the season.

Ole Gunnar Solskjaer even compared Fernandes to two of his own former team-mates at Old Trafford, saying he has “the temperament of [Juan Sebastian] Veron and a lot of the quality of Scholesy [Paul Scholes]”.

While we’ll need a few more big performances to justify that praise, he’s certainly got off to a good start.

After winning and converting a penalty to open the scoring, Fernandes added an assist for Mason Greenwood with a pass less eye-catching than a few of the others he laid on in the early afternoon game.

Following the victory, Anthony Martial jokingly asked his team-mate for a better pass next time, following Fernandes’ defence-splitting ball which the Frenchman needed two attempts to turn into a goal.

In truth, though, the simplicity with which Fernandes slipped through his new team-mate speaks to a fantastic footballing brain unshackled by any need to get up to speed with new surroundings.

Martial’s improvisation to score at the second attempt has rightfully won plenty of plaudits, but United’s £47million man made it all possible by going from zero to chance in a matter of seconds.

The real star of the show is the guile with which he carries the ball forward, tricking you into marvelling at his strides so closely that the pass bypasses you while you’re still gawking at his movement. And it works on people far more important than your average viewer at home.

That wasn’t the only near-miss for Fernandes on the assist front.

Later in the second half, between Martial’s goal and Greenwood’s clincher, Fernandes delivered what scientists will refer to as ‘an absolute bloody peach of a ball’ for Harry Maguire.

There have been times in United’s season when a fantastic pass has felt more like luck than judgement, as if the ball has been powerfully shrugged in the vague direction of where an attacking threat might be, but this is nothing of the sort.

When Fernandes decides it’s time to deliver, he drags team-mates towards where the ball will be in some bizarre act of telekinesis: with one stroke he controls the ball, while another lets him move the other players into position like a game of Subbuteo taking place just outside our line of vision.

It’s not his fault Maguire couldn’t make the desired connection at the end. Except, when you consider the power Fernandes appears to wield all over the pitch, maybe it is.

We’ve seen enough of Man Utd by now to realise it’s foolish to get carried away with their on-field displays until there has been more than a shred of consistency.

The new leaf of that opening-day demolition of Chelsea was followed by three winless games, after all, while even the victory at Manchester City in December acted as the precursor to a home draw with Everton and humbling defeat at Watford.

Still, though, there is a bit more cause for optimism after the latest back-to-back wins in the league, not least because the club is able to point towards a tangible difference in the form of their new midfield star.

With this being Man Utd, there’s every chance they still find a new way to screw things up.

However, while there are positives to be gleaned, and a manager willing to get carried away with the impact of a new arrival, isn’t it more fun for us too to get caught up in the excitement? After all, who knows how long we’ll have to wait for the next time we get the ‘real’ Manchester United back?