Bruno played the stupidest pass of the year, but even when he’s bad he’s good 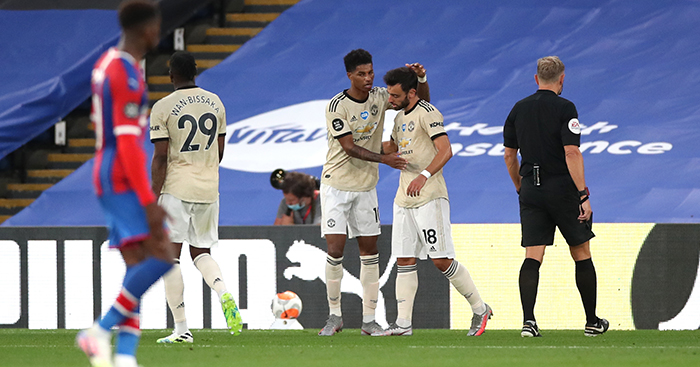 During the second half of United’s win, Fernandes knew he was having a bad game.

His passes weren’t finding their targets, and he cut a frustrated figure as United struggled to hurt Palace’s robust defence.

And this was after he’d got an assist for Marcus Rashford’s goal.

But in the 54th minute, he showed us exactly what ‘Bruno on a bad day’ looks like. And, to the delight (and bemusement) of fans at home, it’s still pretty entertaining.

With his back to goal, the Portuguese received a short pass from Paul Pogba. He had time to control the ball, come inside and keep possession.

Instead, he flicked the ball up, swivelled and booted a 40-yard volley to the right-hand side… straight into the feet of Mamadou Sakho.

It was a piece of brilliance, silliness and possibly tiredness rolled into one.

Less than two minutes later, Palace’s Jordan Ayew had the ball in United’s net — he was ultimately a hair’s breadth offside — but not before Bruno had conspired to give the ball away on two further occasions.

One of those misplaced passes was a header he could do little about; another was a wretched forward pass into Luka Milivojevic that led to Palace’s faux equaliser.

In total, Bruno made 17 unsuccessful passes at Selhurst Park.

His passing accuracy of 73 percent was worse than anyone on the field not named Vicente Guaita (goalkeeper) or Joel Ward (schooled by Frank de Boer in training).

For what it’s worth, Jesse Lingard completed all 15 of his attempted passes.

Of course, none of this should come as a surprise to anyone.

Everyone has their off days, and the clearly knackered Bruno has started all of Man United’s games since the restart — including 120 minutes being marked by a relentless Alex Tettey in the FA Cup.

What’s more, there’s an oft-told anecdote about the midfielder that pertains to his infamous passing stats.

According to the Mail, United decided against signing Fernandes in the summer of 2019 because either Ole Gunnar Solskjaer or Ed Woodward was sceptical about Fernandes’ ability to retain possession.

“Fernandes’ risk-taking may not have fit in with the club’s renewed style of play,” the newspaper claimed.

That 70-something pass completion rate jumped out more than the 33 direct goal contributions in 33 games for Sporting, apparently. You wouldn’t put it past United.

But while the club’s fears have been allayed by the midfielder’s excellent performances, the scouting team was actually right on the money.

Bruno’s pass completion is shit. He’s perfectly happy to flick the ball up, back to goal, in his own half, game on a knife-edge, and volley a pass to Mamadou Sakho.

That would have been a sick volley pass from Bruno

A minute later, he’s going to be just as reckless.

What United are realising every day is that it’s worth it. For every 10 shanks into the shins of Luka Milivojevic, there’s an inch-perfect cross or a devastating free-kick that gets them a goal.

Bruno is playing the numbers game, and he’s winning.

The vindication of Bruno’s methods is right there in the scoreline.

Watch the three-minute highlights of the game and you won’t see that attempted flick and volley. You might not even catch the much worse pass that led to Palace’s disallowed goal.

Truth be told, you might not get the impression Bruno was anything less than his usual brilliant self, or that he was one marginal VAR decision away from costing United two points.

Instead, you’ll see him taking part in both United goals: first assisting Rashford, then assisting the assist for Anthony Martial’s strike.

Except some day it won’t, of course.

Bruno is still yet to taste defeat in a United shirt, but one of these days United’s forwards will misfire and people will point fingers at the person who just so happens to attempt an overhead through ball just before United concede.

That, however, is the business of United fans.

For the rest of us, it might not be appetising for everyone to see United winning all the time, but it’s certainly good that they’ve stopped playing such turgid, lifeless football.

Thank Bruno for that.

His positivity borders on naivety, and that naivety very occasionally borders on idiocy. But if anyone tries to rein him in, it won’t just be United’s loss: it’ll be football’s.

Besides, who else will Joel Ward compare himself to?

What 15 Man Utd players have said in praise of Solskjaer: ‘We love him’