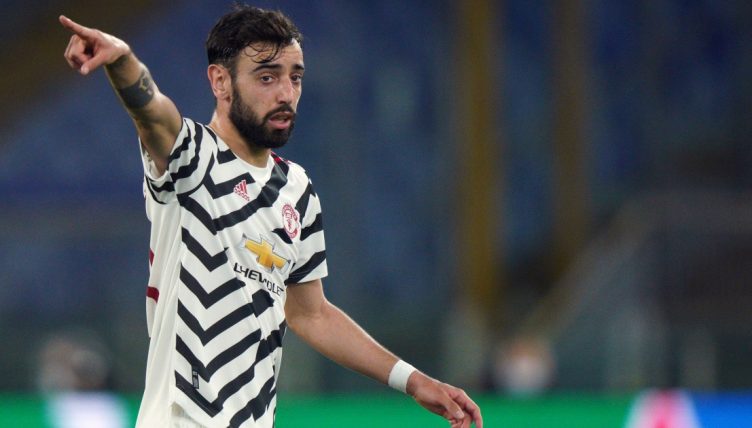 Manchester United travelled to Rome on Thursday expecting nothing more than to rubber-stamp their passage into the Europa League final.

This may seem presumptuous to you and I, but any team holding a 6-2 lead is entitled to feel more than a little secure about their progress in the competition.

The fact United injected more than a dose of jeopardy into their match with Roma was pretty impressive, albeit in a perverse way.

With nothing to lose, the Roma players decided to take the opportunity to play some fast and attacking football before Jose Mourinho implements his own special style from next season.

Despite trailing at half-time to an Edinson Cavani strike, the Italian side took the game to their opponents and were rewarded with two quick goals. United were fortunate that the current David de Gea had been replaced by his own 2015 vintage, but the night was threatening to become uncomfortable.

Enter Bruno Fernandes. There remains little more to be said about Fernandes, who has exhausted all avenues of praise since his move from Sporting Lisbon in January 2020.

For all the qualified praise currently being heaped on United’s progression under Ole Gunnar Solskjaer, the midfielder has been one of the most transformational signings at Old Trafford since Eric Cantona.

So, with pressure unexpectedly building on United against opponents beginning to smell blood, it was time for Fernandes to provide a moment of inspiration while simultaneously calming collective nerves.

A crossfield pass by substitute Nemanja Matic, a player many believe is no longer capable of sprinting but is still an underrated distributor of the ball, supplied that chance.

Controlling the ball calmly despite a deceptively tricky bounce, Fernandes rode one opposition challenge and began to head ominously towards the Roma goal.

Two defenders, their minds clouded with fear and apprehension, were unsure whether to stick or twist. In the end, they did neither which afforded the Portugal international the time to withdraw a top hat and rummage inside for a rabbit to pull out.

As a result, what happened next was a moment of excellence. Having reached the D, Fernandes stopped abruptly and cushioned the ball onto his right foot. Roma defenders Juan Jesus and Bruno Peres not only bought the dummy but had also purchased front row seats to a ventriloquist’s performance.

Having created the necessary space, Fernandes slipped a cute reverse ball into the path of Mason Greenwood. Making his 100th appearance for United despite only learning about algebra last week, Greenwood uncharacteristically put the shot wide.

In response, Fernandes fell to his knees, put his hands to his head and slammed the floor in frustration in a display of amateur dramatics not seen since Marco Materazzi graced the highest echelons of the game.

All jeopardy disappeared six minutes later following Cavani’s second of the game, after which United visibly relaxed and dug out their Lonely Planet guides of Gdansk.

But what should have been a serene night in the Eternal City was in real danger of becoming some ignominious after an hour’s play.

While Fernandes’ reverse pass did not provide a goal, it was further evidence that United possess a player capable of galvanising the team through his own technical excellence.