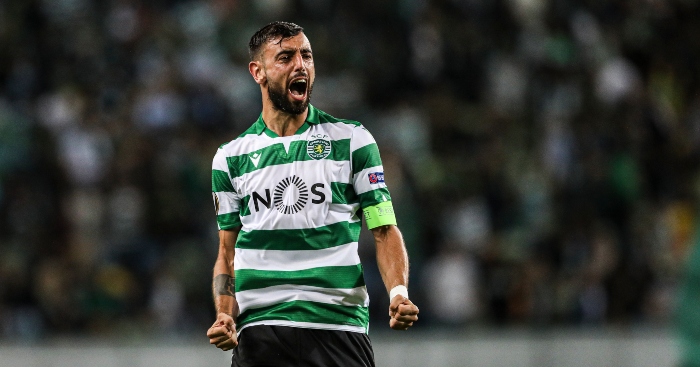 Manchester United have spent years searching for a complete midfielder – and Bruno Fernandes could well be the man to finally fill that void.

We’ve been excited about Fernandes for a while now. His numbers for Sporting Lisbon last season were frankly stupid – 32 goals and 18 assists in 53 appearances – but it was the nature of many of those goals that had us desperately hoping someone would bring him to the Premier League.

It didn’t happen, but now United are in for him again and we’re getting giddy again. He’s got 15 goals and 13 assists from 25 games this season FFS. That’s not normal.

And he isn’t scoring tap-ins either. He’ll have a pop from pretty much anywhere, and a bit like Gareth Bale’s final two years at Spurs, everything he hits seems to go in. He’s becoming the undisputed king of our absolute favourite kind of goal – the thunderbastard.

“You need to have instinct and qualities to score and he has it all,” Jose Mourinho told Eleven Sports in June.

“He strikes the ball well, heads well, cool when he is one-on-one with the goalkeeper. He finds space in the penalty area. It’s all there.”

Dip on that one 😳

With strikes like this, it's no wonder Bruno Fernandes is being pursued by Manchester United! 💥🔥 pic.twitter.com/7In6TpY0uV

But while a goalscoring midfielder is exactly what United could do with, the Portugal international has so much more in his locker. Including, it turns out, being able to turn opponents into statues.

Within the opening hour of Sporting’s first game against Maritimo, Fernandes showcased his technical ability with a manoeuvre befitting of a Brazilian winger at his peak.

As the ball dropped from the sky, most players would have brought it down and then worried about beating the opponent – but why waste time doing two things when you can do both in one go?

As his opponent stood wondering what on earth was going on, Fernandes was putting his cross in. But, more importantly, he had sent a message to everyone watching – and there have been plenty – that he has more than one string to his bow.

In that one moment, Fernandes let us all know he’d outgrown his current surroundings and was now ready to play on the biggest stage. This shit is just too easy.

And for anyone who wants to point out there’s more to playing in the Premier League than scoring thunderbastards and turning defenders into statues, you’re right – and Fernandes knows that too.

When Sporting played Liverpool in a pre-season friendly over the summer, Fernandes made sure we all knew he knows it. Now he knows that we know that he knows.

After a team-mate lost possession in the middle of the pitch, Fernandes watched and waited, realised he was needed, then turned on the afterburners and raced back from the Liverpool half into his own penalty area to block Georginio Wijnaldum’s shot.

You’d be forgiven for assuming that this was a crucial Champions League fixture rather than a meaningless friendly, but that typifies the type of player he is.

While most attacking midfielders tend to neglect their defensive duties, Fernandes is aggressive, happy to press and certainly not afraid to make a tackle.

Fans often worry that a player from a different country will struggle to adapt to English football, but the only people who should be worrying about Fernandes if he makes this move are all the defenders about to face him.

So, yes, Fernandes has an eye for goal, and yes, we’re desperate for him to move to England and score a load of thunderbastards, but he’s also a bloody good player who’s going to make his next team a hell of a lot better.

An exceptional XI of players sold by Udinese since 2010: Alexis, Fernandes…