Bruno Guimarães is in demand, but Chelsea even in 2020 would be ideal 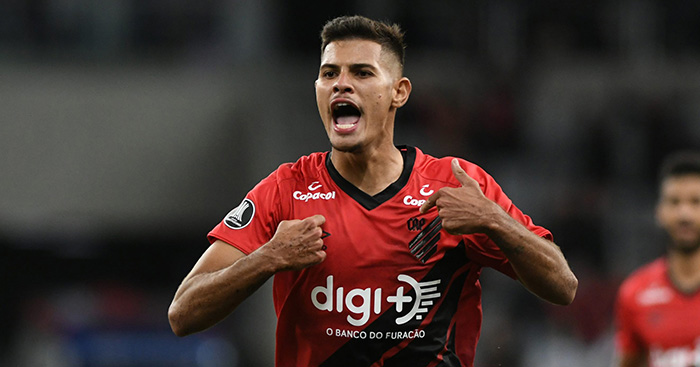 Chelsea’s transfer ban might mean they’re unable to buy until the summer of 2020, but that hasn’t stopped them gazing longingly through the shop window.

It was Athletico Paranaense’s biggest game of the year, a heavyweight clash between the 2018 Copa Sudamericana winners and last year’s Libertadores runners-up Boca Juniors. But one of the spectators at the Arena da Baixada wasn’t interested in the result.

Instead, the Chelsea scout had come specifically to lay eyes on one man – Athletico midfielder Bruno Guimarães.

And by the end, it’s difficult to say whether the employee of the west London club or the fans of the team from Curitiba would have been celebrating more.

Athletico had blown Boca away, putting three past their visitors in a devastating attacking display and announcing themselves as a force to be reckoned with in South America’s top continental competition.

Central to it all, though, was their No.16. The scout must have been sure they had seen something special.

Guimarães had been everywhere, shutting down Boca attacks and crowding out their midfielders in the first half, playing perfect passes and making his trademark driving runs in the second.

And to cap off a display that typified his versatile and endlessly energetic playing style, he had provided one of the assists of the group stage.

Lucho González (yes, that one, he’s still going strong!) slid in to dispossess Carlos Tevez near the halfway line, Nikão played the ball to Guimarães just inside the Boca half and, with Carlitos still sitting on his backside in the centre-circle asking for a foul, off he set.

The 21-year-old charged forwards, leaving Nahitan Nandez in his wake and going past Lisandro López before putting an inch-perfect, left-footed cross into the middle of the six-yard box for Marco Rúben to get the second of his hat-trick on the night.

The Arena exploded. They knew the victory was coming and how big a statement they were about to make. And for Guimarães, it felt like the final, definitive step up into the top echelon of players in South America.

In 2018, Guimarães had been one among several promising youngsters in the team that went all the way in the Sudamericana, the continent’s secondary club competition.

But, playing as the most defensive of the midfield three in Tiago Nunes’ young, enthusiastic, exciting team, he had sometimes been overlooked in favour of his more attack-minded colleagues.

In 2019, though, he has been thrust further forward by his manager and the switch has allowed Guimarães to grab the spotlight for himself.

Before that display against Boca, he assisted his team’s second and scored their fourth in a rout of Bolivian side Jorge Wilstermann.

And in their next game Libertadores against Deportes Tolima, he was again the best player on the pitch, driving forward at every opportunity and scoring the goal that broke the deadlock 10 minutes from time in a typically abrasive South American continental tie.

In Brazil’s Série A, he has been similarly impressive. He scored his team’s first goal of the season against Vasco Da Gama in April, has racked up 93% pass accuracy and provided 2.3 key passes per game – some of the best numbers in the division.

But if Chelsea really do want him – and there have been reports in Brazil that the Blues have already offered to pay his €40million release clause – they will have a serious convincing job on their hands.

Shakthar Donetsk, the two Milan giants, Napoli and Lille are among the other clubs reported to be sniffing around and, if he were to sign for any of those, Guimarães would not have to wait until June 2020 to move. The temptation to accept the first substantial offer that comes along must be hard to resist.

But Chelsea, even if their transfer ban is upheld this summer, have two big bargaining chips in hand.

First, the Premier League is now the most appealing destination outside Real Madrid and Barcelona for South Americans, and Chelsea, with its long-standing Lusophone contingent, is one of England’s most attractive clubs for young Brazilians.

Second, a transfer in the summer 2020 window could be perfect timing from the player’s perspective. He recently revealed on Brazilian TV that it is his “dream” to play at the 2020 Olympics in Japan, and a year on the bench while he adapts at a European giant could put his place in the squad at risk.

Chelsea could pay some of the money now and let Guimarães stay at Athletico – where he is being looked after by a young, progressive coach and playing at a good level week in and week out – to perfect his game.

If they can convince him to go down that route, it could be hugely beneficial to both player and club.

Chelsea will get a modern, energetic and versatile player who, regardless of who their manager is by then, will be able to fit into the team. He has already proved he can play in a 4-4-2 or in any of the central midfield roles in a 4-3-3 and would undoubtedly benefit from another year of first-team football.

For Guimarães, he would get to build a reputation for himself in Brazil – hugely helpful for getting a place in the senior national team in years to come – and nail down that sought-after spot in the squad for the Olympics.