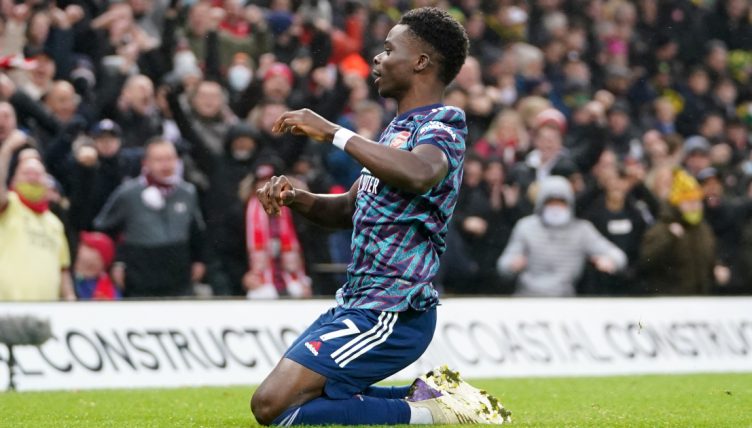 It took Manchester United a penalty to get past Dean Smith’s Norwich at Carrow Road, but Arsenal knocked the Canaries out with five Boxing Day blows without reply.

You could rightly point out that it’s the same three points, but that would be to ignore the clear evidence this Arsenal side is better than the one we have been subjected to for the past few years.

No one embodies the Gunners’ improvements more than Bukayo Saka, the veritable beating heart of the club.

Saka is not just another Arsenal academy product who is just “sort of decent”.

He is a maturing talent with technical ability and clear game knowledge.

The state of his club in previous seasons has forced him to take on a role as a leader faster than any 20-year-old should reasonably have to.

But it means that now, with the players around him finally performing at better levels, his class is beginning to show.

Saka’s second goal against Norwich, specifically his close control in the build-up, is a clear indicator of both his youthful enthusiasm and growing confidence.

Receiving the ball just outside the right corner of the box, Saka stared down Brandon Williams.

Most young players in such a situation panic and, eager to show they belong, would produce some ill-fated skill or fire a poor snapshot.

They are like puppies meeting other dogs for the first time, jumping all over the place with excitement but ultimately they just end up pissing everywhere.

You could see it in Williams’ defending, the 21-year-old eager to dive in and win the ball.

Most PL goals scored by players under the age of 21 this season:

Most PL assists by players under the age of 21 this season:

But Saka is somewhat of an elder statesman now. He knew he had the beating of Williams and bided his time, drawing the defender in.

Then he pounced, moving the ball leftwards once before stopping it dead. Williams over-committed, shifting his centre of gravity too far to the right. He tried to recover but that was when Saka struck again.

It was not yet the finishing blow but Williams and Norwich were on the ropes.

Once more Saka shifted the ball to his left and this time with brutal efficiency and confidence; he knew exactly what he was doing next.

He moved purposefully forward with the ball, Williams leaving too much space between him and the Arsenal attacker, and now Saka was in the position he wanted.

Wrapping his left foot around the ball, he fired powerfully and accurately through the disorganised line of green and yellow that claimed to be Norwich’s defence.

It was a low bouncing shot that kissed the ground as it flew through perplexed legs and outmanoeuvred the helpless Tim Krul, nestling in the Norwich net.

Alexandre Lacazette was all of us when he just stood there and clapped at what he had just seen. For what more was there to say? This was the act of Arsenal’s star boy showing he was a man.

It would be a lie to say that Saka’s game was fully mastered yet, which both himself and his manager would be the first to admit. But as Mikel Arteta said after the match, he continues to improve.

“To play in those positions for a big club like us, you need to be producing goals and assists every single game,” the Spaniard said.

“It’s what we demand from him and he has the capacity to do it and he’s doing it better and better.”

That mirrors this Arsenal side, who are also looking like they are getting better and better with each passing week but by no means are they the finished article.

As the winning run continues, more of the naysayers and cynical voices are silenced but Arsenal must not make the mistake of getting fully caught up in the hype too early once again.

They are finally top-four contenders again, but when their good form ends (and it will) how will the side react? Are they able to win games whilst playing badly? Can these good performances become more consistent?

These are questions Arsenal, and Arteta, must answer positively and the upcoming match against Manchester City will provide a big test to the young Gunners.

Yet regardless, Saka will continue to ply his trade in the Red shirt and improve with every passing game.

He, and his beloved Arsenal, are almost there.