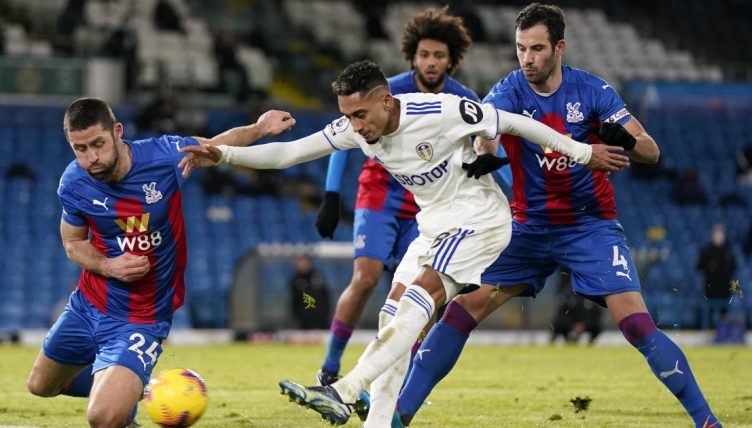 The writing was on the wall for Gary Cahill when he was made to look painfully slow by Patrick Bamford in the first half of Leeds United‘s 2-0 win over Crystal Palace on Monday night.

Bamford has improved many facets of his game since making the step back up to the Premier League with Leeds, but Kylian Mbappe he ain’t. After seeing the striker nip in to pounce on a wayward backpass in the first half, Elland Road’s new turf was made to look like cement by Cahill desperately chasing back with the pained expression of a marathon runner hitting ‘the wall’.

Thankfully for Cahill, Bamford shanked the ball into the South Stand. But the former England international knew he was in for a long night.

At another point in the first half, Palace’s defence frantically tried to scramble back into some form of shape, only for Cahill to run straight into his centre-back partner Scott Dann. Leeds were too busy deciding the best course of action for another attack to notice Dann had been knocked to the floor in his own penalty box.

This isn’t intended as a slight on Cahill as a footballer. The defender has won two Premier League titles, the Champions League and played 61 times for his country. Playing regular top-flight football at the age of 35 is a testament to a fine career. But, bless him, the last thing you need when you’re raging against the dying of the light is a duel with the deadliest gunslinger in town.

Enter Raphinha, a man seemingly dropped into the most-hyped league in the world straight from a game of FIFA Street to see what the fuss is all about.

The 24-year-old’s man of the match display against Palace was only his 18th appearance in English football yet this is already the third time we have felt compelled to write about him. Every single one of his touches seems to sparkle, while his skills are underpinned by an endearingly visible determination: get the ball, humiliate whoever is in front of me, score some goals, win. Football really is a simple game when you play it like that.

Such simple aims allow Raphinha to entertain himself with the most intricate of movements. And so, when Cahill found himself isolated one on one with the winger, he was left hurriedly holding on to his opponent’s torso, desperately hoping he had yet to reach the penalty area, still trying to work out what the fuck had just happened.

This Raphinha is mad pic.twitter.com/I2A42csQP5

To be fair to Cahill, we’re not quite sure how to describe it ourselves. On one hand, it looks like a backheel-pirouette-nutmeg. On the other, it looks like one of the most decorated defenders in England being put in a retirement home.

In years to come, Cahill will be able to regale his grandchildren with tales of his heroics in lifting trophies in Munich, Amsterdam and Wembley.

But the end? Well, that just went by in a blur.